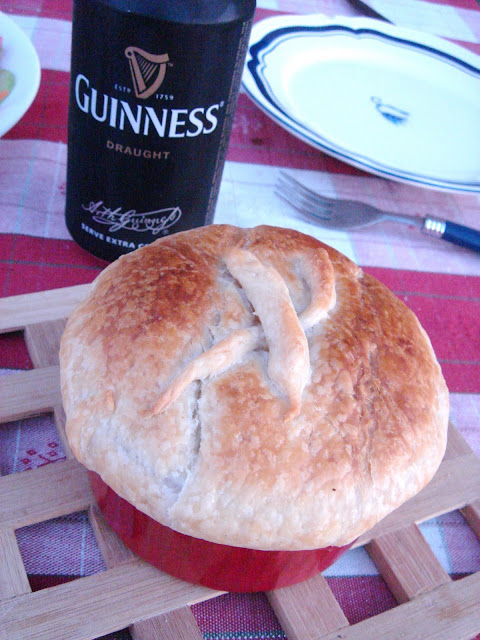 I do not ever drink beer. Hate the smell and taste. Imagine me visiting Ireland many years ago and spending almost every evening in a pub there - drinking orange juice or Coca Cola.

However, I have a thing for cooking with beer. Especially if it's Guinness. It's like me being known as the anti-smoking league (Hub likes to call me that) and having fantasies about smoking a thin cigarette on an elegant cigarette holder. Not that I'll ever do it, I usually just buy a packet of chocolate cigarettes to satisfy the craving.

I went to bed last night with a craving for Guinness. It's weird, but I can explain it. I saw pictures of Guinness Burgers in a beautiful blog a few days ago and they have given me the desire to make something with the brew too. It's the copycat syndrome. Or call it being inspired.

The result is a simple Steak and Guinness Pie that I've adapted from my Irish Beef Stew recipe. I had almost-expiring Irish beef (actually that's probably a major contributing factor to the craving) and loads of puff pastry in the fridge, and more importantly, 4 cans of Guinness Draught collecting dust and spiderwebs in my pantry. They have been around since 2007 if I'm not wrong. The 2 cans in the pack that have been consumed went into making said Irish Beef Stew.

Needless to say I have bought them for Hub, but he snobbed me by saying that when it comes to Guinness, he only drinks it straight from the tap. Something to do with his experience working as a bartender when he was doing his Masters at Cranfield. Though when he saw the pie, he said that he had to eat it with a glass of cold Guinness. For it reminded him of those days very long ago when he had to survive on almost nothing but pies (albeit supermarket ones). 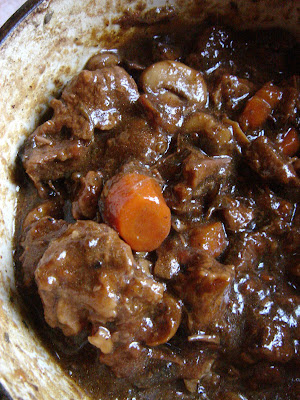 Steak and Guinness Pie (serves 4 as a snack or starter) :

In a heavy-bottom pot heat the olive oil and fry the onions followed by the garlic and button mushrooms. 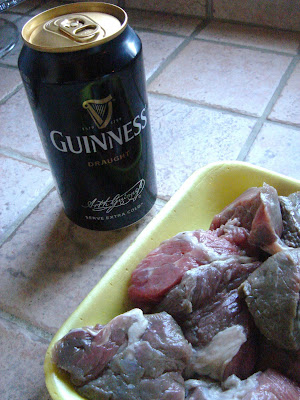 When the oil is fragrant, add the floured beef (cut into bite-sized cubes) and celery and brown the meat in it.

Pour in the hot water, add the beef cube and cover the meat with the Guinness.

Cover the pot and simmer for 2 hours or till the beef is tender and the sauce reduced. Set aside to cool. 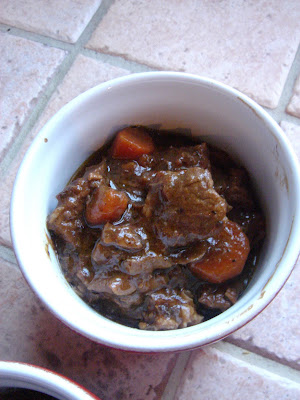 Pre-heat the oven to 180°C. Ladle the filling into the ramequins and add some grated cheese (e.g. cheddar) if desired. Cover with puff pastry rounds that should be larger than the ramequins.

Normally it would be nice to glaze the pastry with some beaten egg, but I rarely waste my eggs on decoration. 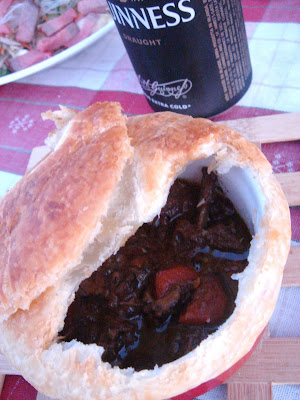 You make it looked so simple . . . . so what will you be making this weekend?