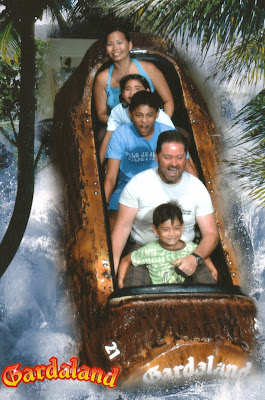 Family picture on the Colororado Boat (the only one you wouldn't need to share with the others)
Before we left for France, we went for the 4th time this year to Gardaland - and this time with Hub. Nothing new to report - except that the Teenager and the Babies (henceforth individually known as Babinou and Babinette) tried Magic Mountain (a roller coaster with a few loops) for the first time and fell in love with it. Quite a feat for the younger ones (they've always been quite brave and adventurous), but you must agree with me that my eldest could have done better. He is often afraid of his own shadow, poor boy, and was only persudaded to go on the roller coaster because of his younger siblings. Queues were extremely long on the day we went too, but one couldn't expect less in August. 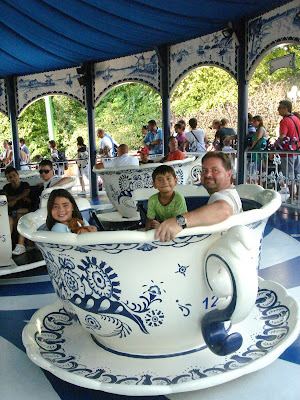 I get dizzy in the tea cup - not for me
We went to Bardolino for a dip in the lake after the amusement park and then had dinner at Ristorante Catullo (always the dining room on the side of the building) that I've mentioned in a post not too long ago. I confirm that the food was really quite good and reasonably-priced and we've enjoyed everything that we've ordered. The client at the next table had a grilled seabass that looked absolutely delicious - wished I had room in my stomach for one too. 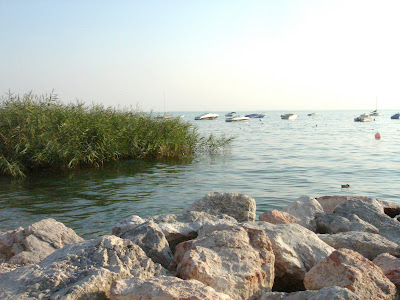 The lake at Bardolino 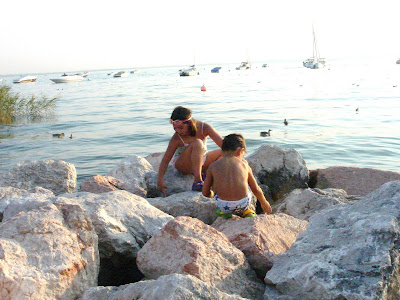 The Babies built an imaginary house on those rocks. They had a kitchen, bathroom, terrace etc on them.
We would be returning to Gardaland one last time before the end of the Season as the Babies want to go on that Magic Mountain again.
Publié par Beau Lotus 涟 à 13:20

Welcome back! Should check if Gardaland have any frequent visitor program, 5 times in a year is quite record for a theme park :)