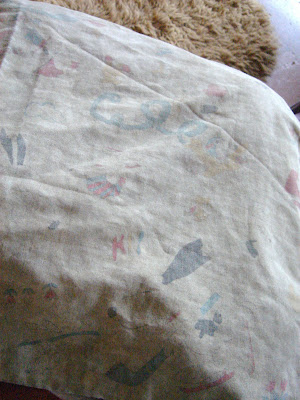 Meet Te-Te-Te
The air con guys came this morning and were greeted by one of the rats before I could get ready (I was still sleeping) and get out of the house to greet them. This is to tell you that our resident rats seem to be still alive and well.
It's almost the end of Summer and we finally got our new air con - kind of pointless, if you ask me. In the meantime I've bought 2 fans and we've slept with the windows open (so that I could hear the rats and night traffic and sleep badly) for 2 months. And tomorrow morning we leave for our 2-week vacation in the South of France, starting with SIL's house in Toulouse and moving on to a few days of canoeing and visiting caves in the Dordogne and finally to a week in a holiday club at Bormes-les-Mimosas. So who's going to enjoy this air con?
I was repairing the tear in Baby Girl's new soft toy Mammut (yes, from our trip to Gardaland - again - on Tuesday) and decided to do the same for my pillow Te-Te-Te. I've been meaning to do this for more than 2 decades, but somehow never found the time. I know, that's a lousy excuse, but Te-Te-Te will know that I love it very much nonetheless - for we've been together for more than 3 decades. Can you beat that? 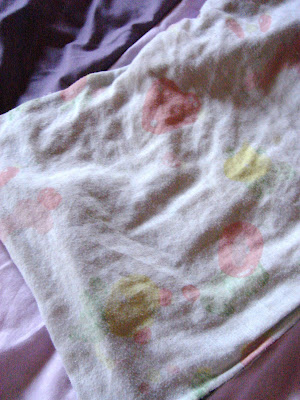 It was my 2nd pillow. The first my little sister tore it when we were fighting. Mum got someone to sew me another one and it was white with snoopy all over it. I couldn't sleep without Te-Te-Te and brought it with me whenever we travelled.
Wherever possible, I never wash(ed) it. Except when my little sister peed on it or when my mum really insisted (cane in hand). Freak out as much as you want, but that's the way it is. I love its smell and feel and detergent is the most horrible thing ever invented for a pillow. It was also a useful weapon to use against the siblings. They would run away or whinge whenever they saw my pillow. 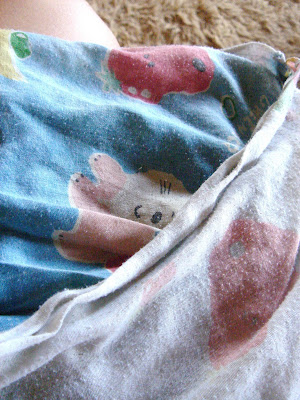 A small part inside the cover is still blue
But alas, Te-Te-Te aged like everyone else. It turned grey and the cotton in it somehow disappeared. Holes appeared here and there - but I refused to throw it away. If I remember correctly, my sis or some friend of my mum's sewed me a cover for it. It was blue.
I've always meant to put new coton in Te-Te-Te, but wasn't sure if it could withstand the operation in its fragile condition. Now even the bright blue of the cover has faded, but it's still my favourite pillow in the world. I used to spend time counting the black dots appearing in the cloth, or scratch off shiny black bits. But somehow it's now ageless... 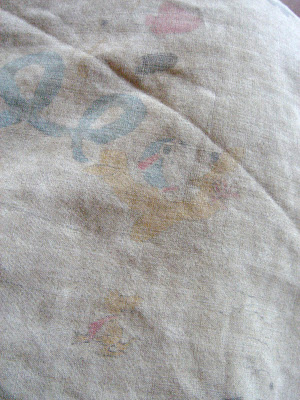 Can you see the faded snoopy?
Te-Te-Te shares the bed with me and Hub. Hub's pretty cool about it, I don't think that he even noticed it. For a few years the Teenager borrowed it from me (he likes it too), but lately I've taken it back because he wasn't showing it enough respect.
Funny enough, my kids have never had a thing for their own personal pillows, cloth or soft toys. Are they not normal or was I abnormal?
See you all in a fortnight.
Publié par Beau Lotus 涟 à 13:52

Have a great trip!

My almost 3-year old son has a little doudou bunny that I've been putting in his crib since he was a newborn. He is very attached to it and spends a lot of time stroking its ears or just staring at it (it has different colors and patterns on it). I wonder if he will still have it in 30 years?

Wow, you are exactly like my sis! I have a lady friend, whose French. Till this day, she is like you, travels around with her pillow. Hehe. Nah you are not abnormal. I thought it was only common among Asians but it's proven that that is not the case.

Perhaps its a cultural thing. Back in Singapore, almost everyone I knew had their comfort pillow. In Italy, its something unheard of.

I dreamt of Paris last night...Have a great vacation! Take lots of pictures !Shall look forward to your new posts!

My little one has her Winnie the Pooh..she is almost five and has got it since she was 2. Sometimes she looses it...and then he appears again. The surprising thing is, that I seem to be more disappointed than her, when she looses it...So, ho is here the normal one??
Enjoy Bormes!
Bisous!

I forgot to sign my last commentaire!! It was me: LINDA!! CIAO CIAO

You know, I was just thinking the other day that when I die and if you should ask me what I would like to be buried/cremated with, I would say my Te-Te-Te...