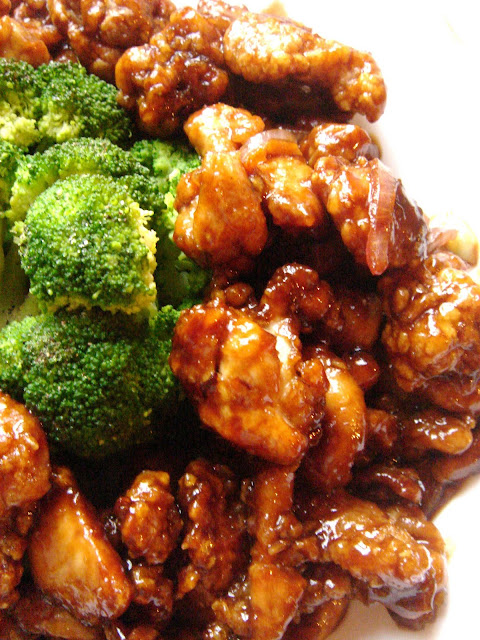 America is a world in itself. And so is the mainstream Chinese food there. I remember wondering who General Tso was and why they seemed to have a thing for Hunan cuisine when the first Chinese migrants there were Cantonese/Toishanese. One of the worst things for me was this crab thingy with cream cheese. Cream cheese in Chinese cooking???

Like their pizzas and pastas, Americans like sauce. And sugar. And volume. I never liked pizza until I started living in Italy and they will tell you that you will know by the simple margherita and marinara whether the pizzeria is a good one. There is usually no cream in a carbonara and a good pasta is never drowning in sauce.

Then there was Orange Chicken. Quite similar to Lemon Chicken come to think about it. It's a variation of the ubiquitous Sweet and Sour Pork (my dad's favourite dish) and probably also General Tso's Chicken (still have no idea who the guy was). Definitely a Chinese-American dish as nowhere else where there are Chinese people has one heard of this dish (in this version).

I read in Ken Hom's Taste of China cookbook (which is worth reading also for the history and description of regional Chinese cooking) that the Chinese use dried orange peel to prepare some of their meat dishes (which also means that these dishes usually wouldn't be too sweet). My dad used to dry and store orange peel when we were younger - though it was only for medicinal use.

Anyway, I like orange chicken. Used to order one from the local Chinese takeaway when we were living in Rochester, NY. Together with Buffalo Wings (Rochester is near Buffalo), orange chicken probably contributed to the 5 Kgs that I put on in 6 months living (and eating) there.

I understand that one likes the dish because (1) it's fried, (2) it's sweet and (3) it has orange juice. I have therefore prepared my version of the Chinese-American Orange Chicken accordingly. 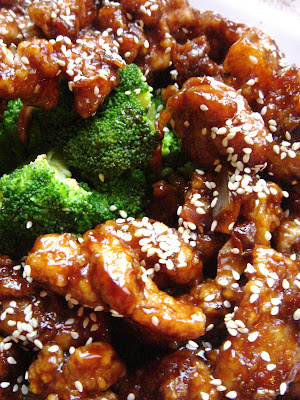 Marinate the chicken with the wine, chilli, pepper, 5-spice powder and cornstarch for at least an hour.

Before frying them, mix in the beaten egg and dust the meat with the salted cornstarch.

Drain on paper towels and set aside. Heat up the sesame oil in a wok and fry the ginger till fragrant. Add the peanut oil and fry the onions and garlic.

Return the fried chicken to the wok and coat the chicken pieces with the sauce. Sprinkle with toasted sesame seeds and serve hot with steamed jasmine rice.
Publié par Beau Lotus 涟 à 21:29

hahaha... we are on the same page here. General Tso's chicken,to me, is possibly the epitome of Chinese-Food-Gone-Awry-In-US. I tell this as a joke all the time among my US colleagues. Your orange chicken looks glisteningly good... and you are lucky to be residing in Italy where good food is revered at all levels.... Hey,thanks for checking out my blog - come by again soon. I have just tried a fruit based Mee Rebus! :)