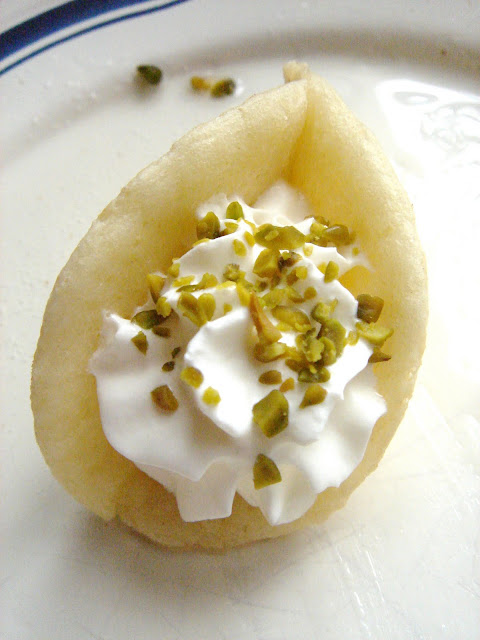 It has been raining since last night so it was really nice and cool for sleeping - in - that is if anybody would allow me to. First the Babies rolled all over slept with me, making me decide to give up on sleeping. A peine la décision faite, the doorbell rang announcing the arrival of the delivery man with 3 packages containing my internet shopping. He had barely left when the bell rang again - this time ushering a good-looking man dressed in white.

I welcomed him with open arms, of course. Because he was just the man I needed, have been waiting for etc.

My rat exterminator. Have I told you that my garden is infested with rats and that it took us 5 months to finally face the fact that we had to do something about that? In the meantime, they have made holes everywhere (e.g. in the garden, at the bottom of the trees, under the pavements, next to the sewage covers...), they have killed half of my potted plants, they have shitted everywhere and they have spent almost every night screeching away disrupting my sleep...I read the UK council warning on how to spot a rat infestation yesterday and my situation fitted the bill - exactly.

The miracle was that we've decided to do something about it only yesterday and the guy turned up this morning. That's the speed of light for you when it comes to getting things done in Italy, but when you work for who we work for in these parts, miracles could happen.

I left the guy to do his dirty job (would poisoning rats indirectly count towards bad karma, I wonder?) under the supervision of...Baby Girl. She took her umbrella (yes, it was raining) and followed him everywhere to see what he was up to.

He told me that he would return on Monday to monitor the situation. I hadn't dared ask him if they would be dying where I could see them because part of me really want to make sure that they die. Preferably without having to dispose of the dead bodies myself. I was born in the Year of the Rat, but funny enough I do not feel any compassion towards my compatriots.

I was just thinking that one of my gardeners must be disappointed that this cute guy got the murder commission because he was all excited the other day when he flushed out a big rat and whacked it to death while mowing my lawn. He quite fancies himself as a pest controller and I could still see him a few months back carrying a rifle and telling me about how he shot a few of my pigeons to death. But pigeons are almost impossible to get rid of, so even he had to forget about them. We're still at our should-we-get-a-falcon discussion. 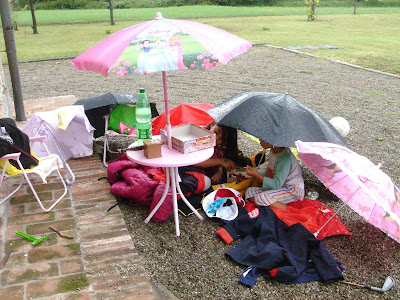 The Babies camping out there in the rain excavating dinosaur bones

Seriously, it's about time we leave. I'm about up to there with nature.

Since we were not going anywhere today (except pick up the Teenager from his sleepover), I've decided to teach the boy how to cook instant noodles and fry his first egg. Then I prepared tonight's Boeuf Bourguignon and this afternoon's Atayef or Lebanese/Syrian Pancakes. I had a craving for orange blossom...

Atayefs are pancakes that contain no eggs and that are usually served with cream (achta) and/or nuts and a flavoured syrup. Some recipes call for them to be baked or fried at the end, but I prefer to eat them as they are. 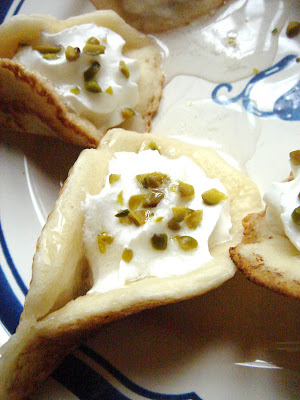 Warm a big bowl and fill it with the flour. Make a well in the middle and add the yeast liquid, sugar, butter, milk and orange blossom extract. Mix into a smooth batter and let it sit till the batter thickens and you start seeing bubbles in it. This could take anything from 20 minutes to 2 hours.

Prepare the syrup by gently boiling the sugar with the water and orange blossom extract. Set aside to cool.

Atayefs are usually filled with clotted cream, ricotta, cream cheese, custard, nuts...but I like mine really simple with just whipped cream and a bit of pistacchios or almonds (though it did cross my mind to fill them with sweet red bean paste). What I particularly love is the orange blossom or rose-flavoured syrup that usually accompanies the filled pancakes.

Heat up a non-stick pan and butter it lightly. Pour 1 Tbsp of the batter into the pan to make small rounds. Cook the pancakes only on one side. When holes appear on the surface (like crumpets), the pancakes are ready. 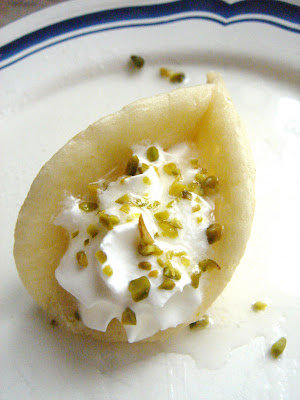 Remove and immediately pinch one end of the pancake so that it is half-folded and sealed. If filling with whipped cream like me, cool entirely before filling them. 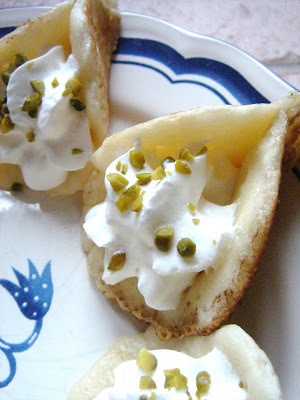 The Teenager was asking for the usual pancakes with maple syrup, but after he has taken a bite of the syrup-soaked atayefs, he gobbled down more than 6 on his own.
Publié par Beau Lotus 涟 à 12:09

It's very interesting, I will make some, thanks! You mind me asking where are you based in now?

Hi Quinn, thanks for visiting!

I'm currently based in Modena in Northern Italy.