The Locals' "Side" of Jinqiao 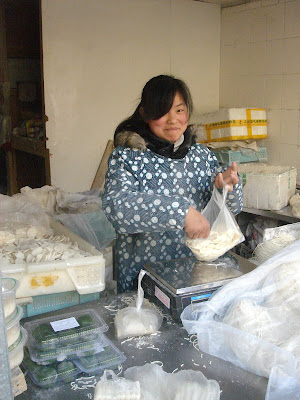 My pretty fresh noodle seller
The sun finally came out this morning. After weeks of rain. Rain morning, rain afternoon, rain night. Where in the world did they manage to find so much rain to pour on us?
Problem was I had nothing on my agenda today. Some paperwork to deal with, a failed soy bean curd experiment (I shouldn't have stirred it), then nada.
I decided to call the spa and arrange for a body scrub and hot stone massage. The stones were...hot. I felt like a (fat) chicken with grains of rough salt rubbed all over, oiled and then roasted. There was even aroma thrown in, it smelled of lemongrass in the room.
It felt wrong to go home and/or stay indoors on a day like this. But I didn't want to go all the way to Puxi just to walk outside. Told the driver to drop me off at the other side of Jinqiao (our nearest neighbourhood), in his words, "the poor people's side of Jinqiao".
Jinqiao - or our part of Jinqiao - doesn't look that much like what you have in mind of China. It is clean, with wide streets, lots of new condominiums, townhouses and villas. There is a Carrefour and a supermarket selling mainly imported products, lots of restaurants that cater mainly to expats and many white and S.E Asian people walking about. Cars with drivers line the streets and there are no shops selling anything that any body earning less than 10000 rmb a month would be able to afford. 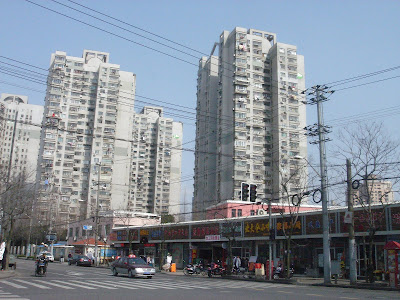 Where the locals live in Jinqiao
Some time ago I asked the driver where he went for his lunch breaks (excluding Food Republic in Carrefour) since most of the restaurants in the area were so expensive. "The other side of Jinqiao" was his answer and since then I've always wanted to cross over to the other side for a visit. 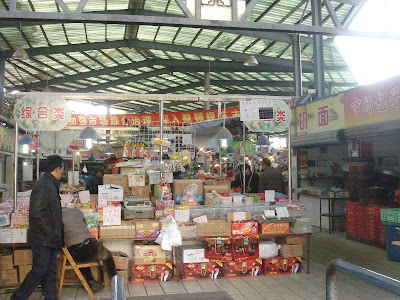 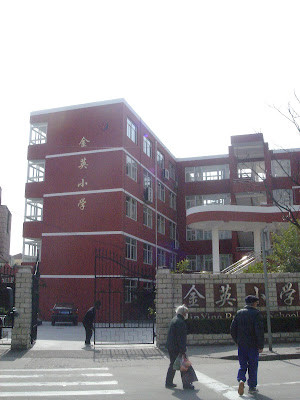 A local primary school - quite nice from the outside
This area is really just a block or 2 away from Carrefour. It's more densely populated with lots of flats both high and low and especially lots of shops both small and big. When I told my driver that I would like to walk around, he looked at me like I was crazy, "What's there to see there?" 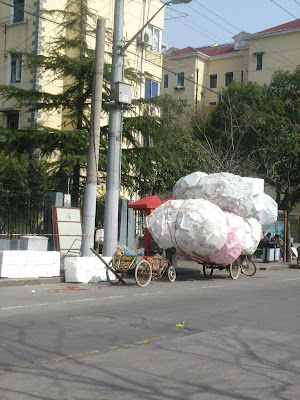 Recycling
Anyway he dumped me at a busy intersection and I started to walk around. At one point I saw an alley where there were small shops and stalls selling cooked food, woollen sweaters (you actually see an old woman knitting away at the entrance), clothes, sundry goods, fruit and vegetables...I find it hard to imagine eating anything there though as there was a strong smell in the air, probably due to this stall selling buckets of duck blood, or maybe to refuse pilling up in a corner. 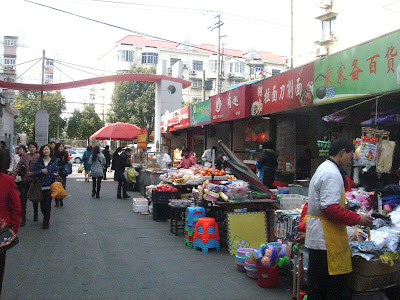 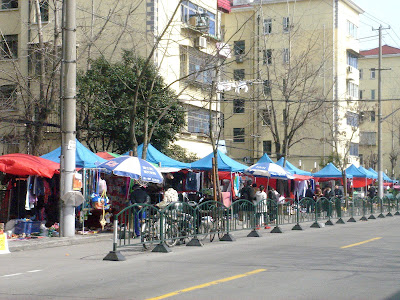 Street bazaar
In a street just opposite a primary school there were make-shift stalls selling all sorts of things including wooden shelves and buckets, and there were also permanent shops selling cooked food, household goods...and fresh noodles. I love carbo and found myself attracted to the white floury stuff on display. Though I had no intention of making dumplings or soup noodles, I found myself buying a stack of wonton wrappers (they were thicker than the ones I normally use) and a few fistfuls of fresh flat wheat noodles. All for 3,50 rmb - I didn't know before that one could buy anything for that amount here in Shanghai. 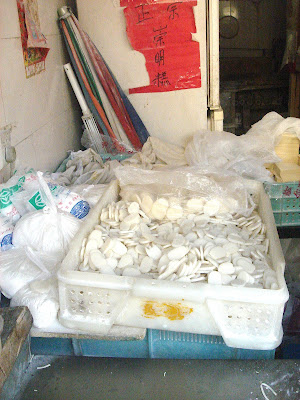 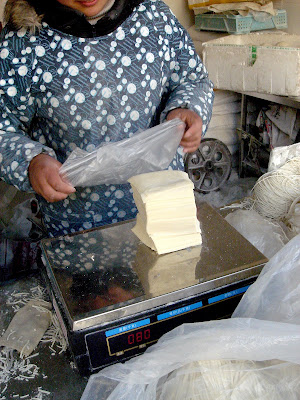 Wonder how many dumplings this client would be making with that 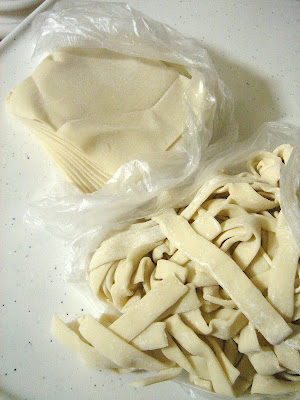 All that for 3.50 rmb!
I also passed by my favourite Shanghainese bakery Ruby which makes very yummy sponge cakes filled with fresh cream. In fact I bought a few cups of...fresh cream for my afternoon tea. The Babies are crazy about their cream too and ever since I gave some to the driver's little girl I've helped Ruby gain yet another (chubby) fan. 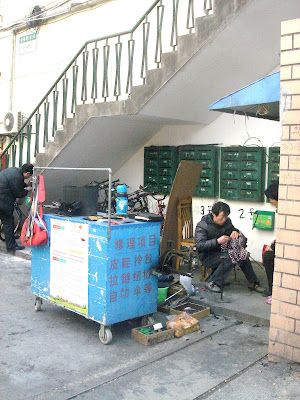 They are often found at the entrances of a residential complex 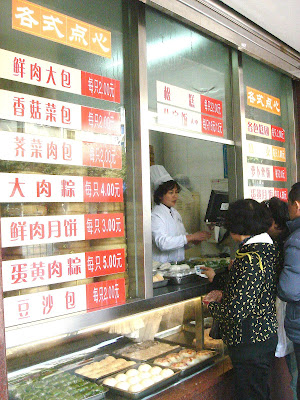 Local snacks
We finished the visit with a trip to the neighbourhood retoucherie - a mobile stall that repairs/changes your buttons, zips, alters your pants etc. 10 yuan to change the zip (versus the 100 that the shop near my villa wanted to charge me) and I let my driver do the negotiation because I was told that once they see my face prices will go up. I probably look gullible or just very foreign. 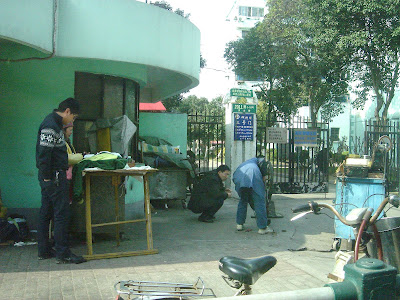 Left = repair and alterations, right = cobbler?
She didn't bother to find a green zip to go with the green dragon costume. I guess I shouldn't complain for the price, but still I thought that she could have made an effort.
Publié par Beau Lotus 涟 à 10:02