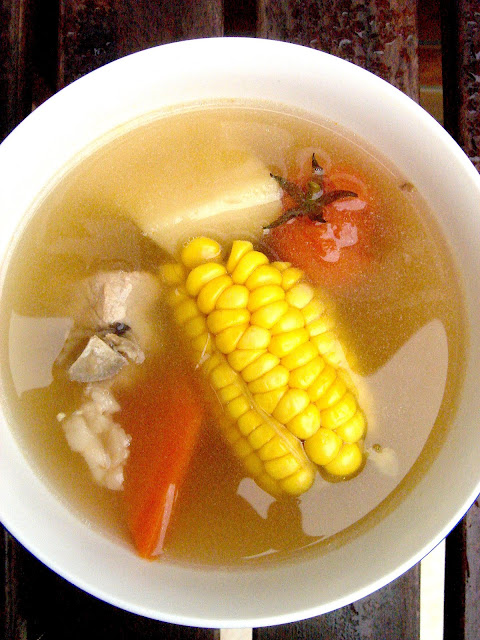 Mum really liked cooking this Pork Rib Potato Carrot Celery Corn and Tomato Soup for us when we were kids. Sometimes she used chicken instead of pork, but either way the soup turned out sweet and tasty and we would spoon it generously over our rice. I have to ask her some day if it was as I've remembered her telling us, that she learnt how to make this soup when she was a demonstrator for Hagemeyer-National Panasonic back in the 1970s.

I've not eaten it for a long time, for when you use the same ingredients (minus the meat and corn and eventually adding other vegetables like cabbage or leek) in a French family, you always end up mixing up everything with a hand mixer and eating the soup as a soupe aux légumes.

But I thought quite a bit about it some time back and felt like having it again. So I made some when Hub was away and fed the kids and myself with it as part of dinner for a few evenings. Part of it (soup only) also went into making rice porridge. It was a nice trip back to the past for me. 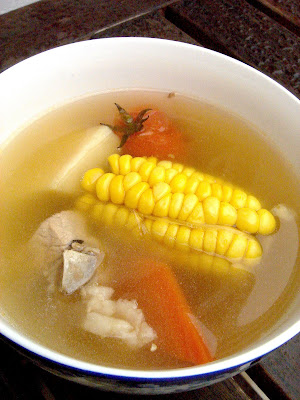 Bring half a pot of water to the boil and add in the ribs. Bring to the boil again then let it simmer for 5 minutes. Drain the water, rinse the ribs under running water and fill the pot with water again.

When the water comes to the boil, return the ribs to the pot, add in the corn, cover and simmer for 35 minutes.

Add in the potatoes, carrots and celery. Cover the pot and simmer again for another 30 minutes.

15 minutes before serving add in the cherry tomatoes. Remove the skin from the tomatoes when you can do so easily.