2012 Violin Concert at the Babies' School

Excerpt of violin concert (Year 3s - could be hard on the ears)
So where do I start? I repeat myself if I say I've been busy, for have I not already mentioned it yesterday? But I have been occupied true enough, much as I have nothing much to show for my business (so that was how it came about!) except panda eyes and empty boxes leftover from express deliveries (my favourite Chinese word at the moment : 快递).
MIL reads my blog and while Hub doesn't, he has friends who do. I should really emphasise the hard work I've put in to be a (good) wife and mother, but one thing that attracted me to Hub in the first place was his intelligence so I guess that he wouldn't buy that.
I might as well admit my recent addiction to Taobao (淘宝). Limited only by my lack of Chinese money (note - not Chinese, it's amazing how much Chinese I can suddenly read when it comes to Taobao). But I've also been doing the usual grocery shopping (and I'm checking out online organic supermarkets as well), running around the kids' schools, meeting a few friends, attending meetings about Global Child Day, dining out during Shanghai Restaurant Week, preparing for Baby Boy's birthday, attending charity galas, making a mosaic tray with the neighbours, learning Chinese calligraphy, psyching myself up for the dinners we will throw come spring...
I do not have much time to do heavy housework nowadays and can only hope that the once-weekly help I've been getting for the past 3 weeks suffices. But I find not having my own ayi liberating. 小朱 works for 2-3 families in the residence and only helps out at my place on her only off-day in the week. She does a bit of ironing (Hub said she ironed badly - but better her than me), vacuums, mops and cleans the toilets. I make sure that the kitchen is clean and the whole house tidy when she comes. She told me this morning that she was surprised that my house was this clean and tidy though I have 3 kids and only have her come in once a week. I told her I was secretly a sorcerer with a magic broom (unfortunately not made in Germany).
Anyway we'll see how long I'll last. If I am sick of doing most of the housework myself, I can always hire a daily ayi again. It's hiring one and having to manage or fire her that's the tough part I prefer to live without. 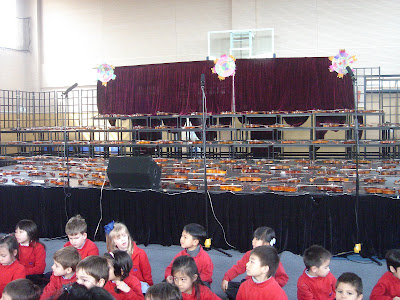 stage was empty except for the violins
So let's start with the 2012 Violin Concert at the school. All Years 1 to 3 kids in the school have to learn how to play the violin. It's supposed to help them learn Chinese better. And they display what they've learnt annually at the Violin Concert. This was Baby Boy's last concert and he stops learning the violin at school after that. But he'll continue with his violin lessons at home with his own teacher. 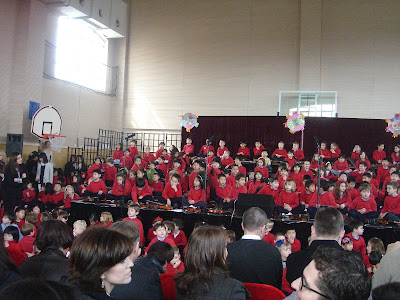 Stage filled up with the young players (282 of them)
Like last year, the sounds were quite horrible coming from the bows pulled by small children. But I was really touched seeing such young children valiantly pulling their instruments and displaying no signs of nervousness. I really like this school with its moral education, own curriculum, mixed population and humble facilities (compared to some of the larger international schools here). If the canteen food could be better, if they could provide a bus service after ASAs and if they could offer French - it would have been perfect. 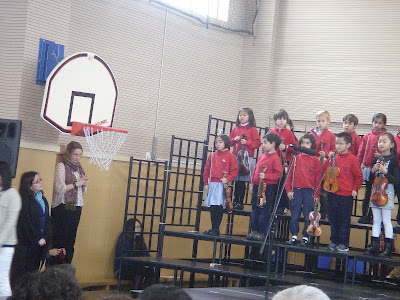 teacher warning them that they were about to start
Baby Boy's private violin teacher said that the pieces he was playing at the concert were actually too difficult for a child who has only been learning the instrument for a few months. Most of his comrades have been playing the violin for a few years. But the school's violin teacher felt that he was good enough to play with the normal group and the boy himself thought so too. I still haven't figured out how one could make music with 4 strings, so anything goes by me. 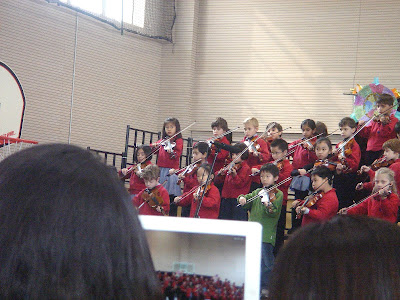 the Year 3 kids playing
Next year I'll put Baby Girl back on the piano whether she wants to or not. There may still be time to cultivate a small ensemble in our household. 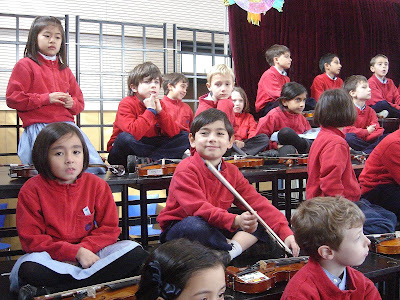 Lotus, you are now doing taobao deliveries on behalf of Spore & European customers? Not sure whether I read it correctly. If so, what are your rates?

There are quite a number of self appointed agents who handle payment & delivery on behalf of Spore clients but I find it too expensive. Just wished Taobao would open market directly with overseas customers.

I head to South Korea's Gmarket instead which accepts worldwide credit cards. Its exactly like Taobao & better becos its a subsidiary of Ebay.

Anon I'm not crazy. To buy one item you normally need to read thru 100 pages and as a foreigner unless you get a local to sponsor you you can't use your taobao account safely. I'm also limited by my lack of rmb. I occasionally buy for myself but spend a lot of time lookIng...eBay now has direct sales by Chinese sellers keep seeing the advertisement.

Absolutely Gorgeous! I love that you added the blue/gray tiles to the subway tiles. It's so gorgeous with the hint of blue paint! LOVE! :)
ming green marble Tile