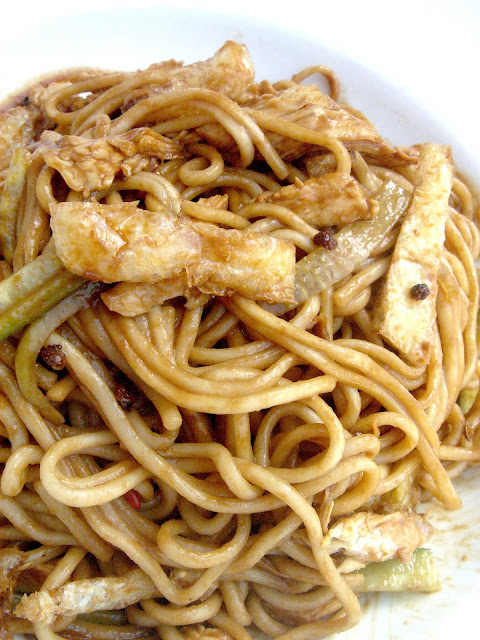 
In my quest for a local substitute for imported tahini (which is very expensive here in Shanghai), I ended up buying a few jars of sesame paste some of which also contain peanut butter (and are therefore not suitable for making hoummous). Currently not in a figure condition to enjoy peanut/sesame butter sandwiches, I had to find some better use for said pastes and came up with a bowl of Chicken Dan Dan Noodles for lunch.

I had my first bowl of Dan Dan noodles at Ding Tai Fung last year and didn't like it. I felt that it was too peanut buttery. I've wanted to make my own version since then and was glad that I found a moment to do so a few days ago. Life has been hectic lately between meetings for Global Child Day (GCD), my mosaic and calligraphy hobbies, recent passion for picking up the piano again (too much stess?), housework, lunches with friends, cooking classes and preparing to receive friends and family to Shanghai starting from the end of May.

I've also been having quite a headache over Baby Girl and her lacking behind (according to all her teachers) in almost all of her subjects. We need to figure out if she's having problems learning, if she's slow and/or if she's lazy. How's that?

Dan dan noodles are also known as spicy Sichuan noodles. Though it has become such an important part of the Taiwanese snack culture that we probably think of Taiwan (or even American Chinese) first and Sichuan second when it comes to the dish outside China. My version was, I think, more Taiwanese than Sichuanese (if you go by the ones I've eaten in Sichuanese restaurants thus far).

I didn't have use of the driver that morning so I couldn't buy any fresh Shanghainese noodles (that I felt would go well with the sauce). I used fresh ramen meant for lanzhou lamian instead which worked out quite well actually. It was more springy and had a firmer bite compared to Shanghai noodles. I didn't use any spring onions because I do not like them much.

The result was a slightly sweet, salty, peanut buttery, acidic and fiery bowl of noodles. 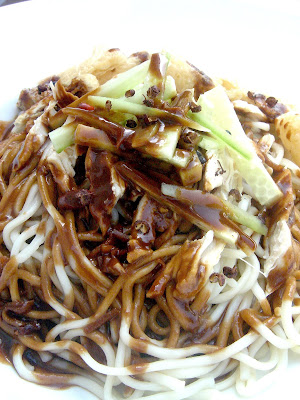 Bring a pot of water to boil and cook the fresh noodles till they are al dente. Drain and set aside.

Combine all the sauce ingredients in a bowl and set aside.

Heat up the peanut oil and fry the ginger and garlic till fragrant. Stir in the sauce ingredients and simmer till well combined. 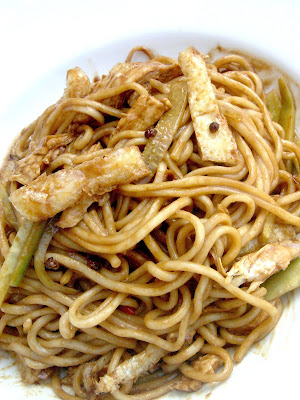