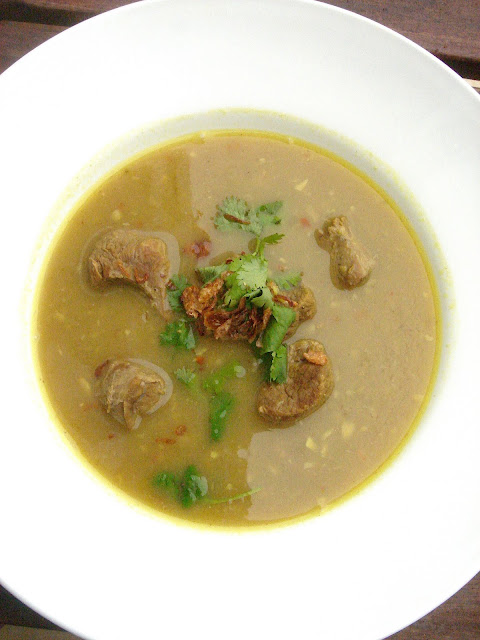 
Most people lose weight for the summer. Not only did we (as in Hub, Baby Girl and myself) not shed any kilos, we actually put pile them on merrily. Now that we have moved into the autumn, we realise that we are FAT big time, even pregnant with the kids I've never weighed this much.

Seriously it wasn't my fault : that we are not living in the heart of the city where I could walk to shops (you wouldn't want to take the metro in Shanghai, it actually crashes from time to time - not that I have any public transportation within a 2km radius of my compound); that we had to leave Italy and have so many farewell lunches and dinners; that we had to arrive in Shanghai and eat out every day in the first few months; that we should have guests almost every month and end up eating lunch in restaurants all the time; that I love to eat.

Still, we look horrendously fat. I had to go all the way to London to shop for clothes last week because there is no way I can fit into Chinese sizes. Even H&M carries mainly EU 32/34 here. You could imagine my joy when I was at Coast, FCUK, Monsoon...on the British Isle and found that they carried UK size 16s. Not that I'm happy about wearing UK size 16. But I couldn't possibly keep wearing my XL Club Med bermudas and X-sized T-shirt when there's no way I can keep pretending that I'm on my way to the beach with us being so much into the Fall.

I had to buy 2 LV bags (on behalf of the Chinese girl servicing our villa) at the Champs Elysées the other day and was the only person in Birkenstocks, bermudas and T-shirt in the super expensive boutique. And the nearest beach is like a few hours away by TGV so I wondered what they wondered when they saw me. Luckily I diverted the salesman from my person to concentrate on my past - because I threw names around and the former Sciences Po classmate I mentioned happened to be the guy's former manager (what a bloody small world) and of course he wanted to know more about what she was like when we were at school together...

But it was great spending another person's money chez LV since we are too poor to afford any such branded bags ourselves, though I was a little nervous as I walked through the Gare du Nord with the bags to take my train, having read an article about pickpocketing gypsies in Paris Match not too long ago.

So Hub said we should have soup for dinner. Carrot and coriander Soup, bak kut teh, leek and potato soup, pho, chicken soup, dhal soup, tom yum soup, tomato soup, hot and sour soup, won ton soup...I've done them all. Then he asked for Mulligatawny Soup which much as I adore is a waste of good deboned leg of lamb that I usually buy every week. Then I noticed that Madhur Jaffrey has a recipe that doesn't call for the use of bone (thank you, chicken stock) which would also give me a chance to check out how well-stocked my Indian neighbour (from New Delhi) is seeing that I do not have besan (chickpea) flour.

I managed to borrow a few tablespoons of said flour this morning as we waited for the school bus. Also met her husband as he was eating his breakfast. He works for Pepsi.

No, he didn't offer me free Pepsi. And we have not lost any weight even after eating all those soups. 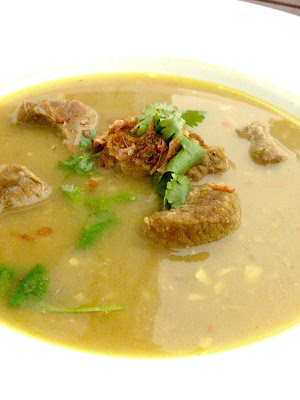 Heat the oil in a soup pot and brown the lamb cubes in it. Remove and set aside.

Pound the ginger and garlic into a paste. You can see bits of garlic in my soup as I didn't have the patience to pound it into a fine paste.

Fry the ginger-garlic paste in the oil till fragrant. Add in the fresh chilli, ajwain seeds, pepper, salt and ground spices.

Return the lamb to the pot, add the lentils and cover with chicken broth. Cover the pot and simmer on low heat for at least an hour or till the lamb is melt-in-the-mouth tender.

Leave to cool and keep the pot in the fridge for a few hours so as to be able to remove the fat easily.

Heat up the soup. Dilute the besan flour in a bowl of water and stir into the hot soup. 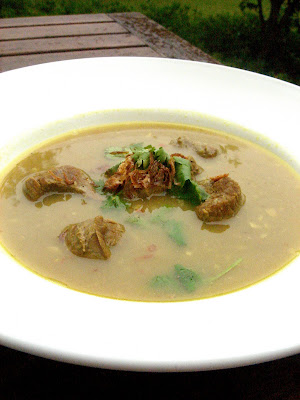 Stir in the lemon juice and serve hot with (2 tbsp of) rice, fresh coriander leaves and fried shallots.

Really nice day to be eating this soup as it has been raining non-stop since this morning.
Publié par Beau Lotus 涟 à 07:06

if you're still looking for clothes and happen to be in the area, i've found some good buys in large sizes at the Marks & Spencer outlet near chenghuangmiao, yuyuan. happy CNY in advance and take care!