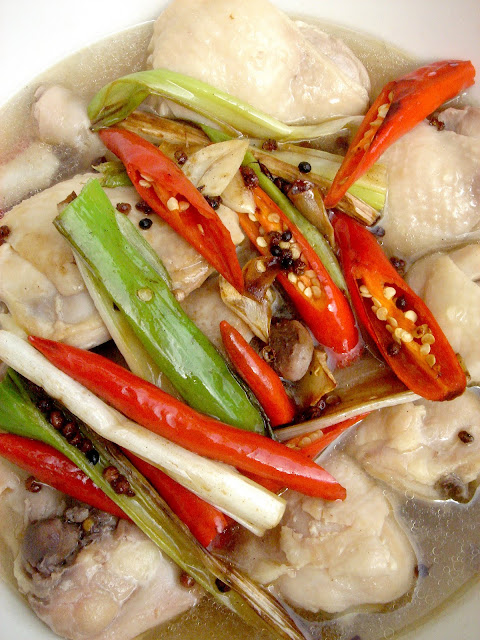 There were apparently quite a few famous Golf Pros in the competition e.g. Rory McIlroy, Anthony Kim, Noh Seung-yul, Ian Poulter, Hunter Mahan, Geoff Ogilvy, Lee Westwood, Padraig Harrington...all fighting for the 2 million USD top prize. One of my regrets about Italy certainly would be losing the chance to become a successful golf Pro's mum. When we were living next to the Modena Golf and Country Club the boys used to train and play there and we've been told by their instructors that they had talent. Moving to Shanghai killed whatever talent they had for golf in the bud what with golf being such a very expensive and elite sport here. Irony's that we actually live next to the Tomson Golf and Country Club - but couldn't afford to play/train there.

While the boys were following the Pros in the competition, we girls did a spot of shopping at the Lake Malaren Outlet next door. This Baoshan neighbourhood is literally covered in "European-style" construction. Villas and apartments are sprouting up everywhere each one looking more luxurious and expensive than the last one. The Outlet however is crap - another example of Chinese plans always looking better on paper than in reality. Even on a Saturday it was quite empty and the shops had almost nothing to sell. We managed to buy a few items though - a woollen skirt (supposedly some Parisian brand), a pair of Converse shoes, Betty Boop sports shoes and Nautica swimming trunks.

The highlight of our day was our first time eating in a cheap Lanzhou (Chinese Muslim) eatery. I thought that there weren't other restaurants around (which wasn't true as I would discover later) so I dragged the driver and the Girl to the "only" eating place I could find for a late lunch.

They did a good thing hiding the kitchen from public view while the dining area itself was messy but looked reasonably clean. The prices were really low (for us) : 5 rmb for a plate of egg fried rice, 9 rmb for a small bowl of beef noodle soup, 7 rmb for noodles in spring onion oil. The driver said that the same things used to cost much lesser not that long ago though. And he paid for lunch!

I have never eaten in such a very "local" place since we moved to China because I'd been so afraid of falling sick. But when you thought you had nothing else to eat you discover that you were not that afraid of having a stomach upset after all. And I do so love noodles of any kind.

I also couldn't resist the sight of Chinese Muslim men in white caps. For some reason they fascinate me. The low prices probably helped, I was curious to see how such cheap food would taste like.

Quite good's the verdict. The egg fried rice was oily but tasty, the rice cooked al dente and the egg well-mixed with the vegetables. The noodles in spring onion oil was very oily but quite yummy and even came with small slices of beef and a small bowl of hot soup that tasted of beef and spices. I could get really used to eating so cheaply - if I do not die of a stomach upset after this meal. Actually quite unlikely as I also drank a bottle of Coca Cola during the meal to help clean out the stomach.

This set me thinking that I've yet to post my Ma La Salted Chicken dish. Inspired by our lunch at our hostel in Hangzhou. It was a chicken dish that came in a big bowl filled with a skinny whole chicken chopped into pieces, covered in a very salty clear soup and topped with red chillies, leeks and whole szechuan peppercorns.

I made mine using a combination of methods : first poaching the chicken pieces Hainanese chicken-style, reducing the broth and finally frying the leeks, chillies and peppercorns in hot oil and then pouring them over the chicken in its broth just before serving. 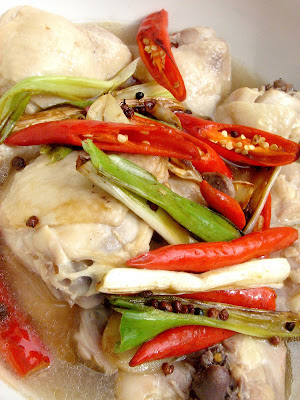 Rinse and pat dry the chicken pieces. Rub salt and pepper very generously all over them.

Remove the chicken pieces and put them in a bowl of cold water for 10 minutes. Remove and drain. Set aside.

Reduce the stock. Ideally it should be quite salty. Put the chicken pieces in a serving bowl and cover with the stock. 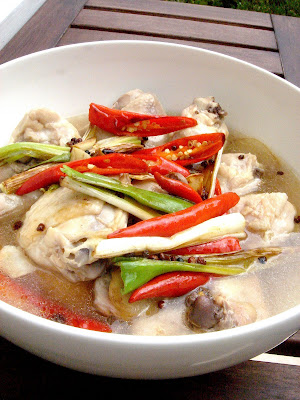 When ready to serve, heat up some oil till sizzling in a frying pan and fry the ginger, garlic, leeks, peppercorns and chillies till fragrant. Pour over the chicken pieces and serve hot. They should not be removed as you fish out the chicken pieces since they add flavour to the stock.

Mine will require improvement as the chicken pieces were too juicy and the stock not salty enough. I could also have been more generous with the garnishing.
Publié par Beau Lotus 涟 à 14:46