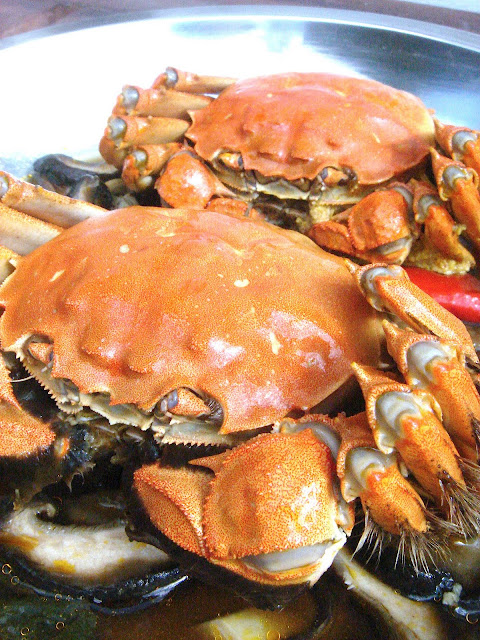 Steamed Hairy Crabs on a bed of spinach

I regret that I still do not know how to kill crabs humanely after more than 3 decades devouring them in all the sauces. The last few crabs I've cooked myself were frozen flower crabs and a few of the earlier big stone crabs I'd boiled them alive. Cruel, I know.

We are now in the midst of Shanghai's Hairy Crab 大閘蟹 season. Our driver offered me a pair of live crabs (one male and one female) knowing how much I'm fond of the crustacean. The good thing is that the Chinese mitten crab (known as hairy crab because of the fur on its legs) is often no larger than one's palm and therefore quite manageable. Even though I have seen various cooks kill crab (using different methods and believing in different humane theories), I have mastered no quick method to put them out of their misery, and could only hope to give them less pain by first numbing them in the freezer for 15 minutes and then steaming them in a pot with rapidly boiling water for 20 minutes. 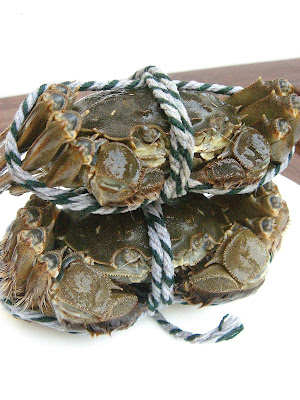 Restaurants in Shanghai would serve hairy crab meat and roe in dozens of ways between september and december though the classic way to eat it normally consists of dipping the steamed crabmeat in some vinegar, minced ginger and soy sauce. As the flesh is supposed to be cooling (yin), the Chinese would often eat it accompanied by some yellow wine (yang) to balance things up.

In the markets they would sell crabs of various grades and prices though I have no idea how to tell them apart and those that are particularly expensive and prized came from Yangcheng lake 阳澄湖 near Suzhou. Every year there would be syndicates pirating the crabs, passing off cheap crabs for Yangcheng lake ones involving laser inscriptions, fake hair etc. Counterfeiting is an art in China and they will do anything in their quest to make profit. 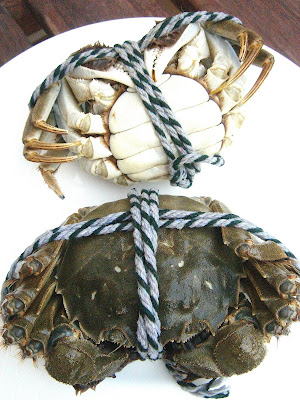 The smaller crab was female, I think

I simply washed my crabs and put them in the freezer for 15 minutes. In the meantime, I heated a pot of water and lined a metal plate with fresh ginger, spinach, Chinese mushrooms, garlic and a red chilli. Placed the crabs in the plate when the water in the pot is boiling and poured a sauce made out of Chinese cooking wine, light soy sauce and sesame oil over them. Op into the steamer to be steamed covered for 20 minutes. 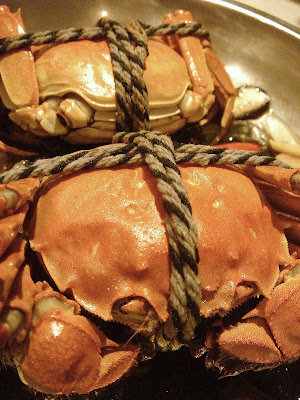 Fresh out of the steamer

Ate one crab hot with a vinegar and soy sauce dip and the other I kept in the fridge for a few hours after it has cooled a little and ate it cold. The hairy crabs were small but the flesh firm and full of flavour. I must admit that I am now tempted to buy a few crabs myself and cook them again before the season's over. Humane crab killing be damned.
Publié par Beau Lotus 涟 à 10:21