Mac and Cheese with Bacon and Porcini Bits 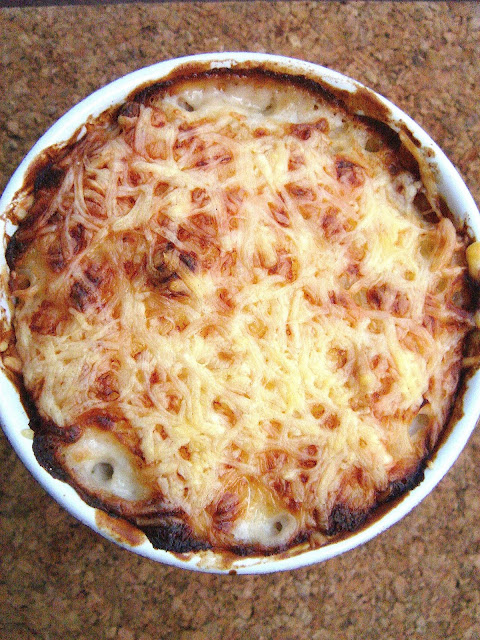 It was crazy how one could suddenly develop a craving for macaroni and cheese. But I suspect that Carrefour selling grated French emmental cheese 2 for the price of 1 contributed some towards said craving. Imported cheese (if there were Chinese ones I prefer to remain in ignorance) costs quite a lot here in Shanghai, so my need to take advantage of the offer could surely be understood.

10 months after leaving Modena finally saw the onset of pasta withdrawal symptoms da noi. The kids have been asking for spaghetti alla carbonara, Hub all'arrabbiata and I for some reason kept seeing macaroni or chifferi as the Italians prefer when it comes to short elbow-shaped pasta. Actually I do not recall seeing macaroni when I was living in Italy. There was Maccheroni, but it was long and best eaten with meat sauces.

Imported pasta isn't cheap in Shanghai, but one should rejoice in the fact that one could find them rather easily. Armed with my packet of chifferi from Barilla, vintage cheddar from Kerrygold (Ireland) and the French emmental from President, I was ready to cook myself some Mac and Cheese with Bacon and Porcini bits.

It's the end of the Chinese porcini season and I managed to buy some of the last fresh mushrooms a few days ago. Mac and Cheese is basically comfort food that is often featured in kids' menus in American-style diners here though precisely because it's so basic I prefer to make it myself. I have seen packets of Kraft Mac n Cheese mixes at the supermarket and the thought of eating them freaked me out for some reason.

What I love about the dish is the gratinated cheese, so I usually make shallow casseroles that have more surface area for melted cheese. And I also like to make Mac and Cheese in individual ramekins because any excuse to use my Emile Henry porcelain bakeware is a good one. 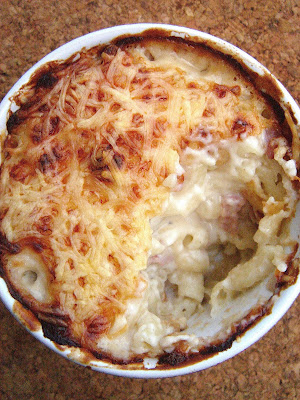 Mac and Cheese with Bacon and Porcini Bits :

Cook enough elbow pasta (to fill up 3/4 of your bakeware) in salted boiling water. Needless to say the pasta has to be al dente. Drain and place in the casserole.

Melt some butter in a small pot. Add a pinch of nutmeg, generous turn of ground black pepper and salt.

Stir in a bit of flour and milk to make the béchamel. Keep stirring and make sure that the flour is cooked before using the sauce. Make enough to cover the pasta in its recipient.

Add grated cheddar cheese to the sauce and stir to melt it (over low heat). Taste and adjust seasoning if necessary.

Pour the sauce into the bakeware and coat the cooked pasta with it.

Cut a few slices of bacon and a fresh porcini into small pieces and cook in a frying pan (adding a bit of butter or olive oil if necessary) till the bacon is crisp. Add minced garlic and cook till fragrant.

Stir into the pasta-béchamel mixture.

Top the pasta casserole generously with grated emmental cheese. Many would add panko or other breadcrumbs to the dish at this stage but I prefer it without.

Bake in the oven for 30 minutes. In the last 5 minutes turn on the broiler if necessary to bronze the cheese and make sure that it's nicely gratinated.

When I'm too lazy to make Mac and Cheese from scratch, I turn to Kraft Velveeta for the cheese sauce. The cheese is an actual thick cheddar sauce, not like the other powdered-just-add-milk Kraft Mac and Cheese mix.