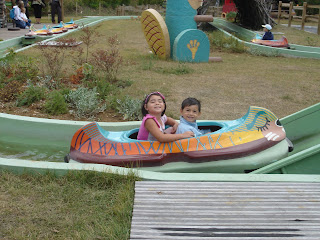 We originally planned to visit Parc Asterix (again) but decided at the last minute to go to the Mer de Sable in Ermenonville also north of Paris. It had been a rainy week plus we didn't feel up to spending hours queuing up like we did at Gardaland just 2 weeks before. 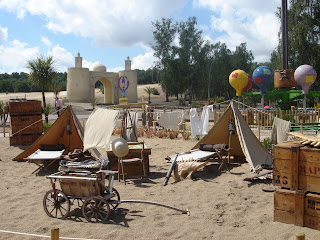 This park was quiet. No queues at the cashier. No queues getting in. No queues for the rides. So we got to do everything by the time the park closed at 6pm including watching the 3 shows available. Wow. For once.
But just a quick note of warning to those who do not like rubbing shoulders with the masse populaire. This park is smaller and cheaper (19 euros per entry) than both Parc Asterix and Disneyland Paris. So it is inevitable that you get mainly clients from the poorer suburbs of Paris and from the region north of the Capital, not to mention groups from the centres de loisirs (holiday childcare centres). Parking is free (versus 7 euros for Parc Asterix) and there are just a few kiosks selling coffee, drinks and sweets.
One of the 1st thing MIL said when we arrived at the park was, "Why, it feels like one's in the banlieue (suburbs)!" And I couldn't help thinking as the day progressed that whether we like it or not, those people are different from us. It's a world between the civilised snobbish friendliness of Parisians and these loud and often inconsiderate people from elsewhere. I had quite a headache after one African insisted on sharing his passion for loud rap music with all within 200m around him, for example. And you didn't dare tell him off as he was really quite gigantic, if you wish. Those foufou stuff is very filling from what I know.
Back to the rides, they have a little of everything and I would recommend the park to those with young children (e.g. 2-8) and who do not enjoy queuing up. For older children and adults, there is a rather cool water ride (a good plunge - just great) that if I may say so is actually more exciting than the ones I've had in the more famous parks. Their shows are mainly Cowboy-Red Indian shows with good equestrian displays. 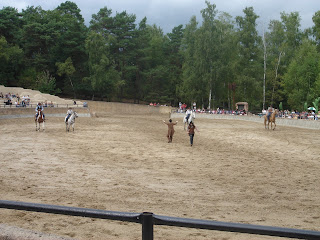 Calamity Jane Show
Around the Mer de Sable, you have the little town of Ermenonville and it's actually a really pretty one with a most beautiful castle and lovely stone houses. Probably will be a good idea to visit the town quickly (maybe have a picnic in the forest opposite the amusement park) when you're there.
All in all we had a good day though I doubt if we'll return to the park again. I'm a big child and need a more sophisticated park to play in.
Publié par Beau Lotus 涟 à 12:29