Brunch at the Blue Elephant, Paris 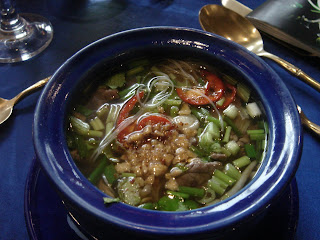 Soup with Vermicelli and Sliced Beef

Many moons ago I invited the Hub to the Blue Elephant on his birthday which was generous of me since in those days I was still living with a student mentality and had difficulty buying the need to spend a few hundred Francs on a Thai dinner. Nowadays of course in accordance with my glorified maid status I no longer bother with prices or at least if I do I would pretend that I didn't.
A few years later I had Sunday Brunch in said Thai restaurant with my Singaporean girlfriend MF and I remembered being happy with it though still whinging about the lack of Thai desserts as we know them in Asia (namely the steamed tapioca and tako that I just adore). At that time we paid 29 Euros per head. A few Sundays ago when I brought the Hub there to brunch using his funds, the price had gone up to 39 Euros. And still no Thai desserts as we know them in Asia.
But as I had expected, he was happy. The restaurant is situated in Bastille in a seedy but interesting street filled with lots of restaurants, bars and cafés. It's actually in some kind of cheap between-2-walls transformed into an exotic paradise with wood, bamboo, flora and fauna, a bridge and a pond. We arrived early and got a table on the mezzanine overlooking the buffet area and it was just perfect. 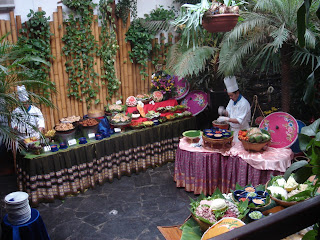 View from our table
The buffet consists mainly of a fresh salad station, a soup station (you choose your own noodles and ingredients and the cook prepares it for you), a starter section (e.g. satay, fried hors d'oeuvres, tim sum...), a main course section (e.g. different types of curries, stir-fry dishes, rice, pad thai...) and a dessert and fruit section. The quality is quite good and the selection while not as important as buffets come in Asia is OK, I guess, especially after years of living away from Asia. Unlike many Thai restaurants in Paris where the owners are usually Chinese of some sort, the Blue Elephant has a real Thai cuisine with a nice and gentle Thai service. I sometimes do wonder why Chinese waiters are usually so rude and impatient, though it doesn't mean that we are not good people as a race. Anyway I digress. 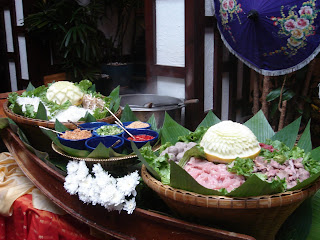 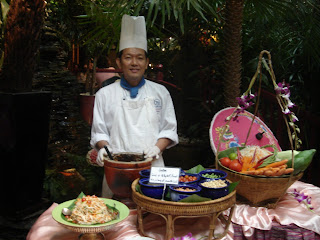 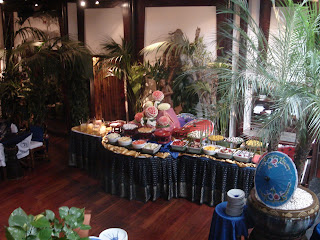 I remember going to the one in London more than 20 years ago. The food was good, so good that we hungry teenagers kept ordering, the portions were tiny. I think my visiting aunt (she was treating) nearly passed out when she saw the bill.

Welcome back to the blogging world! Missed your entries! Back home now? Will read your blog in detail again when I´m online again...gonna sleep now....

Umami, it must be the same one then and it does seem to be a good restaurant (Royal Thai cuisine and all). Good for your aunt, you'll at least always remember her for that :-)

Pris I took a quick peep at your blog last night, boy have you been active and having the blast of a time from the look of things. Will return for more detail when I have the time. Now just trying to update my own blog when I can!