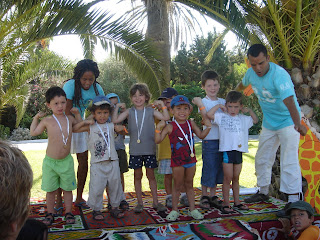 For some reason the Hub has something for Club Med. Maybe it's a French thing, because when I was buying tickets at Wild Wild Wet in Singapore, the French ladies queuing up behind me talked about going to Club Med (Bintan) too. And if you've watched the cult movie Les Bronzés they were also waving their arms away in some Club Med. Sea, Sex and Sun...
So though I blanch at the idea of indebting ourselves just to spend a week doing nothing and stuffing/drinking oneself sick, I gave the details of my Carte Bleue over to said Club and condemned the family to another week of excess and certain weight gain.
Positive thing was that I've never been to Tunisia. And in my lost youth I've dated a rather cute Tunisian guy for a few days, so I've some interest in seeing (more than a decade later) his homeland (and countrymen).
We flew into Monastir from Paris and had the joy of hearing the same child scream from Orly Airport onto the plane into the bus all the way to our hotel. His chic mother looked absolutely helpless and hopeless. In fact many of those rich people's kids could be quite painful as we were to discover during our stay, made the Babies look like angels in comparison. Many a time I was really tempted to tell the parents that certainly a little swing of the cane from time to time couldn't do any harm.
Our part of Tunisia looked dry. Desert-like, with olive trees and cactuses everywhere, half-built houses and buildings and herds of goats on both sides of the highway. I was pleasantly surprised to see many Tunisian women in casual wear in the streets, sleeveless tops and all. In fact we could go topless on the beach or poolside and nobody would try to stop us from doing so.
Club Med Nabeul is more than 3 decades old from what I was told. About time it received a facelift. Our rooms were simple with 2 single beds each, a bathroom with shower and a ceiling fan. The cool thing though was that the rooms were cleaned and tidied up daily unlike in the cheaper French Clubs.
Now if you want to go to Club Med you must like to party a minimum. Which I don't. I know, I am a bore. 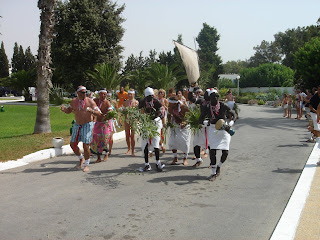 Senegal (made me want to visit the country)

At Club Med, they engage you 24h/24h. Music, dance, arm waving all the time. Peace and quiet is not a given. And best to like sports because they are really top for that. They have tennis courts, a private beach filled with top quality catamarans, surfs and kayaks, rollerblading grounds, archery grounds, outdoor gym etc etc. And those GOs (Gentils Organisateurs) usually have qualifications like "Junior Champion at Roland Garros in 2006", "Senegal's Top Archer", "France's Champion in Rollerblading in 2005, 2006..." 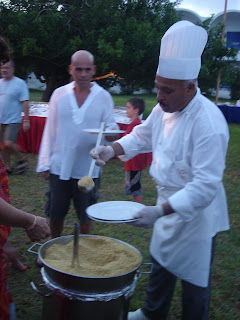 And to make it worth your money, you must like to drink. Now they only do all-inclusive packages which means that you can drink (even alcohol) 24 hours a day. I found myself drinking like 3 Sangrias and 3 Mojitos most days after Noon plus a few Diabolos here and there! 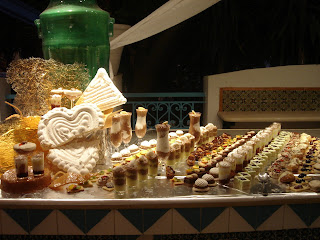 Did I mention buffets 3 times a day? All you can eat and drink. The quality of the food is so-so, but there is variety and alot of effort usually goes into presenting our meals e.g. garden party, beach party, pool party etc. 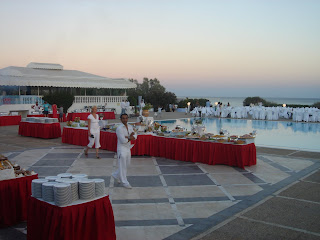 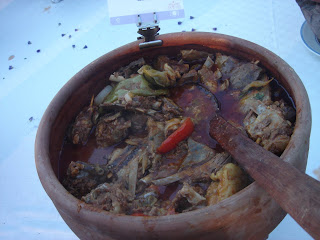 There were also themes every evening and if you didn't have the right clothes for a certain evening, you could always purchase something in the Club Med Boutique (business 1st, babe). There's a spa (European prices), a mini Souk, afternoon tombolas, fried doughnuts at 4pm, a performance (in French, of course) every evening. 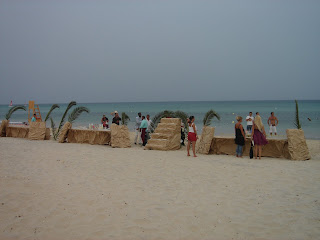 Cocktails on the beach before dinner

You could also go on excursions to visit Tunisia, ride a camel in the grounds and play golf in Hammamet (also European prices). 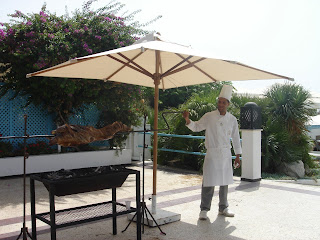 For those with children, there are clubs for children of different ages and they look after them almost all day long from like 9am till 9pm with a shower break in-between (5:30 to 7). The babies preferred to stay with us though and we usually had to threaten and bribe to get them to spend a few hours in their Club. 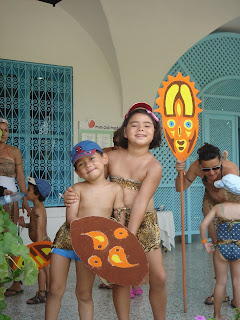 One thing Hub and I took a liking to was archery. Almost every afternoon at 4 sharp we would turn up to shoot a few arrows. And he also did a bit of wind surfing now and then. I regret not taking the opportunity to learn how to rollerblade or play tennis (didn't bring tennis shoes), apparently they were good even with total beginners. 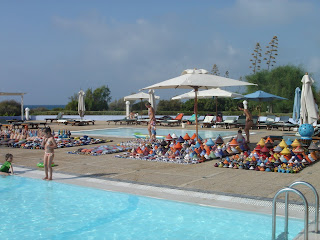 Mini Souk at the Pool

Sounds like you had a really varied and fun summer. I've got a couple of students are who great fans of Club Meds too, every holiday destination they go, they stay in a Club Med.

Good on you for not thinning out S's credit card during the vacation in Tunisia but you can always make up for it online! :-P

Ohh sounds like fun.
Have never done the Club Med thing, The childcare thing sounds wonderful, although I doubt I could throw the kids ther for son long.
PS: I though I was the only one who didnt know how to roller blade. I want to learn it so bad..someday

hey S.! So nice to read from you again! I´ve never been to Clubmed either. Closest I got to hearing about it was from a galfriend who was offered a job as a dance instructor in Clubmed, Bali I think.... She turned it down, citing inappropriate work culture as her reason. Let me get it straight. You were first in Singapore, followed by Paris and then Club Med?!? Am I right? Been trying to follow your thread....so many different photos at all the same time!

Wah, you are having one big holiday after another huh? Awww... the babies look so cute esp baby girl in her bikini. Must show my princess. Lol!

E, those students of yours have alot of cash leh, Club Med is very ex, I'm still trying to recover from the cost...

Sraikh, so join the club. Actually I don't know how to do much of anything. My dad's a bone sinseh so he had some phobia of us falling and hurting ourselves. We were more or less locked up at home and never got round to learning any sport. Pathetic, I know. So I usually just fantasize about playing badminton or tennis or rollerskating - but doubt if I'll be any good in them.

Pris, yeap, I was 1st in Sgp (3 wks) then in Paris and finally in Tunisia. The posts all come in haphazardly heh heh and definitely in no order and now and then you'll find a "new" post between older ones - coz I'm actually writing almost all of them at the same time!

D, Baby Girl's a little too fat for her Tunga costume and her top kept rolling up :-). But she was really cute in it alright - good enough to be eaten.

Yeah, rich is the right word to use. Those students are dentists and I am sure you know how much they charge over here, hence the overflow of cash in their bank accounts.

You hit it right on the nail, dentists in Italy are particularly costly!!! Hub got one cavity filled and the bill came up to 280 euros, I couldn't believe it at all!!! Daylight robbery...and nothing to be done about it as apparently public dentists have a very bad reputation and nobody wants to go to them.

This is a very interesting blog and so i like to visit your blog again and again. Keep it up.