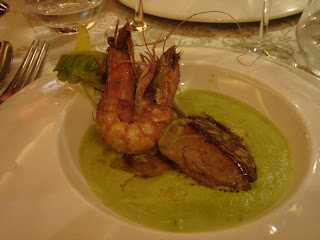 This was the 1st nice restaurant that the Hub brought me to when we were still dating. And that after he had brought his good old friend B there first. But still, it was a nice restaurant and we eat really well there. It was therefore with nostalgia and stars in the eyes that we dined at La Ferme St Simon one evening recently in Paris - after a break of many years.
We nearly didn't make it there though and actually had to race through Paris to reach it before they closed the kitchen. Before that we were at the Bastille, in the Théâtre de la Main d'Or, more precisely having a good time catching Dieudonné and his one-man show "J'ai fait l'con". He was brilliant as usual and the theatre was full full full, we were packed like sardines in it and quite a number of people had to sit on the stairs - but nobody complained and he was welcomed to the stage with generous applause. Electric atmosphere. But it started late and therefore ended late.
I ignore the polemics surrounding Dieudonné's alleged anti-semitic views. From what I understood of the guy after watching a number of his shows, I do not think that he's racist in any way (he's half-African). Provocative, yes. In fact, too much. Politically correct, not at all. Angry, probably. Because let's face it, all the tragedies and atrocities in this world are never given the same attention or treatment. Black slavery was a drawnout, murderous affair that is almost forgotten today. The Palestinians are crying but you usually only hear the Israelites. I think that he only wants to draw our attention to the injustice in this respect, make us think about it. In any case, Hub and I enjoy Dieudonné very much. Especially his good timing in delivery. As I must have also said it before, you need to have some general culture to be able to understand his shows. You go there to have a good time, but to have that good time the brain gears have to be working. In this show he sketched out his asking Jean-Marie Le Pen to be his child's god-father (!), the pgymies in the Camerounian forest, Colin Powell/Bush and the Invasion of Irak, some sort of an Ode to the Palestinian Suicide Bombers (aiiii)...
In any case he'll be giving a performance at Bercy on Dec 26. Just so you know.
So we arrived at the restaurant just before the kitchen closed and left the car with the valet (thank God for valet parking). The restaurant was still as we remembered it, calm, elegant and simple. It's situated near the French Parliament, Musée d'Orsay, Ministeries and the foreign embassies and has a simple and very French menu. The last few times we were there, I had always started with their green bean and duck liver salad, but this time around I decided to try something else and was happy with all the choices I've made. Everything had been cooked to perfection and the ingredients were nicely married no matter how unlikely matched they may seem at first glance. The service was discreet yet attentive and the sommelier knew her job and her food and could offer good advice for the wines. A lovely way to end our evening. 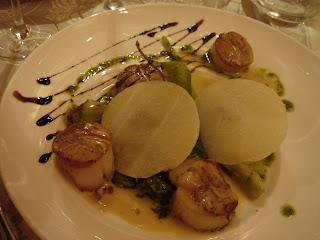 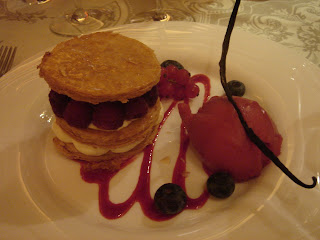