Party at the Ks 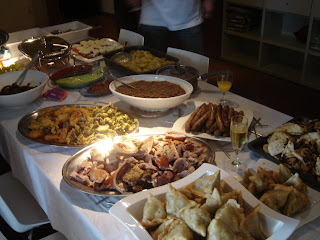 The Spread
The Ks do a great party at the beginning of every Summer and we were lucky to be part of the guests. They live up in the mountains where many Italians own second homes (to escape the hot Summers) so you get to enjoy the food and company in a picturesque setting. Only slight blight to an otherwise perfect party was the fact that it drizzled almost all the time and apparently it's going to rain the whole of the coming week. Sigh... 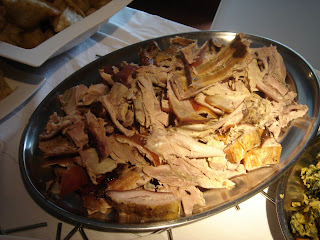 The Pig
We had a feast composed of Indian delicacies and a whole Roast Pig. R likes to tell us of how you would wake up to pig calls, grunts and snorts at 6 am in the whole of Yugoslavia and where most inns serving food would display a pig or some part of it on its roof or door to attract patrons. So it was a good pork and we would help ourselves to a piece of it now and then - no offense meant to vegans and vegetarians. 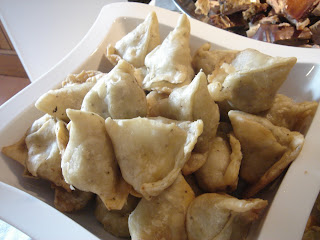 The Samossas
I stuffed my face with the samossas and had a few helpings of the okras. Brought along a Chicken Stir-fry as R's a fan of Chinese food. Almost never saw the kids as they played with their friends and never saw the Hub either as he stayed with the other men indulging in music, alcohol and cigars. Lentils and Vegetable Pakoras
I had a great time gossiping with some of my favourite gals and meeting a few new faces M being a man of some influence in these parts. It was a party that lasted hours, we arrived at noon and left before midnight.
Publié par Beau Lotus 涟 à 13:29

Wow, that was a long party but it sounds like a wonderful time with great eats!

You stayed that long? No cranky kids?

Hey, I posted a question for you on my blog abt how expensive things are in Singapore.