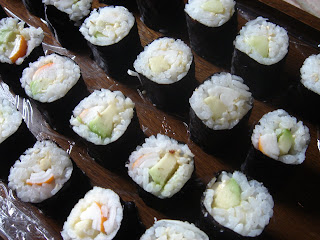 If you saw me on Tuesday afternoon, you would have seen an angry frightened person. Because your son had a project to finish and hand in the next day. You watched his other classmates walking past you at the school's entrance with boxes filled with electric circuits (Unit of Enquiry : Energy) and when you asked the boy to show you his, he only had an empty box.
I was furious with the boy. And I didn't understand how his teacher could allow him to hold on to an empty box on the eve of the assessment. Certes, the poor lady had spent alot of time trying to explain the project to him, but she obviously couldn't find the right switch because he obviously hadn't known where to start. Yet he knew his work.
Because after I have screamed at him in public (you see giggling mothers obviously thinking that I've lost it) and everywhere else, I asked him to sit down and start drawing me a few electric circuit diagrams before he did anything else (that was what I remembered of my own lessons on the subject - that you always start with a circuit diagram). He did just that and then in the next hour or so, without any intervention on my part (beyond "circuit diagram" I've given all that I've learnt back to my teachers), he just set up his circuit model (doll house with furniture, light bulbs, wires, batteries etc) like he had done it all his life! How's that? #&?¿*+$@
Then he had to work on the written part of his presentation. I have seen him doing research on the Net a few days prior to this, but the mystery of the month was that he didn't seem to need to print out or write anything down. Did he imagine that he had an excellent memory (ok, at times even photographic) and/or that part of his presentation involved an oral examination of his understanding of this Unit?
So he worked till midnight re-doing his research and typing his work out (because I got fed up with asking him to re-write his stuff all the time, his handwriting moved from manuscript to nondescript since he came to this school) while I came by occasionally to give him another scolding in guise of motivation. 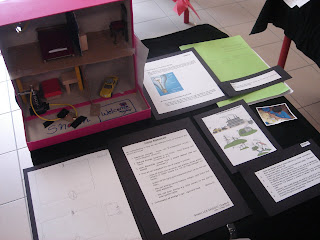 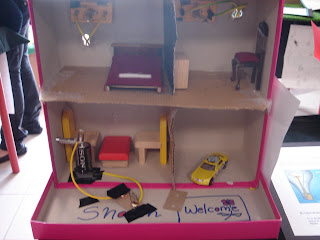 His model with 3 circuits and a home-made switch 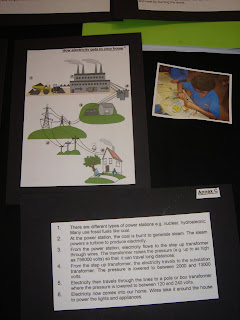 How electricity gets to our homes
Yesterday we attended the model exhibition and I was quite relieved to see that he seemed to have done a pretty decent job. Though I started to boil again thinking that if he could do something this decent at the very last hour he could have produced something really good had he started earlier. Ifs...
E told me that I shouldn't have gotten so angry and been so hard on him. She has a brilliant son who did all of his work in advance so she could be zen. But she was right, of course. I'm a horrible mother, terrorising all with my impatience plus unforgiving attitude. And Eldest Son is particularly sensitive and lacks esteem and having a mother like me certainly doesn't help him at all. I wish I could be like R who churned out compliments like water from a fountain to her boy.
And then I found out today that a few other kids did their work at the last minute too (at least another kid had an empty box on Tuesday) though their parents were more cool about it. 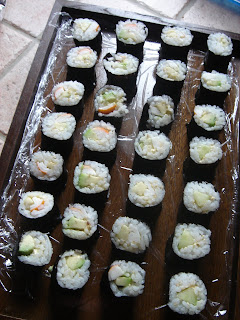 Anyway, all's well that ends well and he seemed to have recovered his spirits. Last night I had to make him some Cucumber, Cucumber & Omelette, and Avocado & Surimi (Crab Meat) Makis to bring to his Italian lesson at school today. They had to pretend to be working in a restaurant (at the rate he's going he'll probably end up doing it for real). He must have done pretty well because I had just gotten out of my car at the school's carpark when Luigi (the school's Master of DIY) came by to tell me that the boy had done a great job at the "restaurant". If Luigi makes you a compliment, you should be very proud of yourself. Not the sort who opens his mouth if he has nothing to say.
Publié par Beau Lotus 涟 à 15:58

Hi S.! You have a smart boy! I can't imagine what's it like not to be able to understand what the teacher says. But boy, you saved the day! Your kid is smart! He inherited your genes, of course have to smart lah! So can pat pat his head when he proved himself to do his project on his own...oh btw, my sister is the super last-min one and I'm the more consistent one. But it works for both of us. She's a lawyer now...so last-min people do succeed too!

To be fair the teacher did spend alot of time explaining to him what he needed to do but I think he just didn't know where to start for some obscure reason.

I was the super last minute kind when I was a child too except that I was also KS (as in kia si scared to die) so I would still finish my work on time somehow and properly too.

Ah.. I, too, am rather hard on my children. It must be universal with the perfectionists.