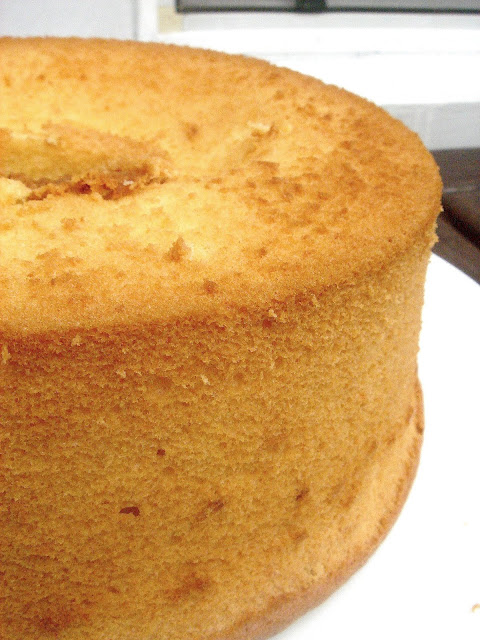 
Fei went with Judy to the wholesale fruit market the other day and offered me 10 oranges. They were Chinese-grown and were surprisingly sweet and juicy. I ate them as they were and then had visions of Orange Chiffon Cake which were just nagging to become real.

Pieced together a recipe after interviewing a few chiffon cake experts meaning I took whichever part was most convenient to me. I've also learnt how to make an Earl Grey Tea Chiffon Cake at the ABC Cooking Studio some time back so I've understood the principle more or less - I think. 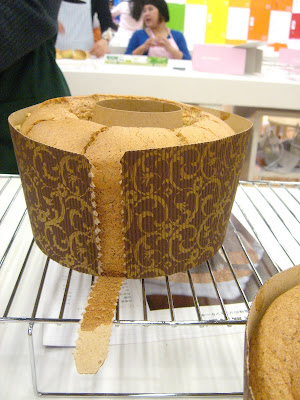 My first attempt at the orange chiffon was a flop though the cake was tall and tasted really good - because it was undercooked. I am still not familiar with my current fabulous American oven and success is rarely guaranteed on the first try. When you think that my chiffon cake guru Shelley actually bakes hers in a small toaster oven you feel like a total wimp.

Like I've been telling the Teenager, it's the player that makes the gear, not the other way round. He's the sort of kid who expects to be geared up in designer sportswear when he signs up for golf, soccer or tennis - and then play mediocrely any way. I digress as usual.

Failing your chiffon cake on a morning when you were supposed to be doing necessary housework added to your sense of failure so I had to console myself by hailing a cab and going out for a foot massage. On a morning of several firsts it was the first time I tried this massage parlour, but had good expectations of it since my former neighbour's father used to go there and was on first-name terms with the staff...

But it was too Chinese for me. Gaudy decoration (lots of gold crepe and big flowers), TV, fruit and tea in the room - and a talkative masseur. Guy asked me if I could speak minnan (aka hokkien), declared us relations and proceeded to tell me his life. Thank God he was still very young so it couldn't drag on longer than the hour I was there. The massage was good but I think I'll stick to the strictly no-talking environment in S.E Asian spas. 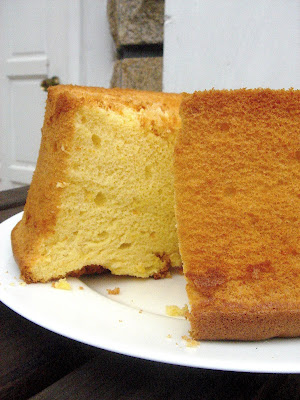 Like they say, 失败是成功之母. The cake turned out nice and tall this time round. Moist, fluffy and tall, tall, tall. Nice orange colour thanks to the orange zest and only my barbaric knifing as I removed it from the chiffon pan (while screaming at the kids) made it look this ugly. 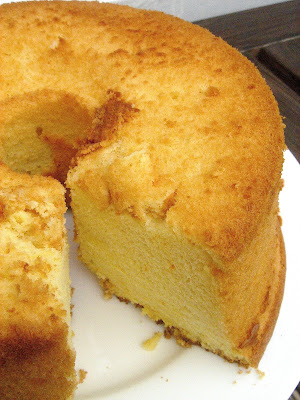 Separate the yolks from the whites.

In a large mixing bowl beat the yolks with an electric hand mixer. Add the vanilla essence and sugar and continue beating.

Now add in the oil and beat.

Followed by the orange juice in 2 times and the zest. I find it easier to zest my oranges whole (about 2 big ones) so I do it before I juice them.

Sift the flour with the baking powder and fold into the batter.

In another bowl whisk the whites till you get a foamy batter. Add the salt and continue whisking.

Followed by the cream of tartar and whisk till stiff.

Whisk in the remaining sugar till you get stiff peaks, gradually lower the speed of the whisk so as to keep the shape of the batter.

In 3 times gently fold the whites into the yolk batter.

Scoop into an ungreased, unlined, unfloured tube pan and bake in the oven for 55-60 minutes or till the toothpick comes out clean. 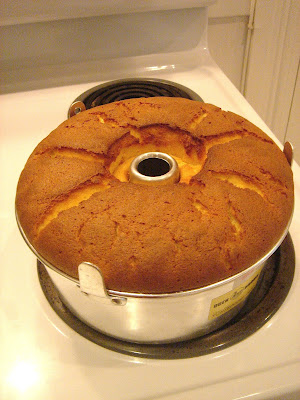 Fresh out of the oven

Turn it upside down immediately and let it hang/cool for 1-2 hours. 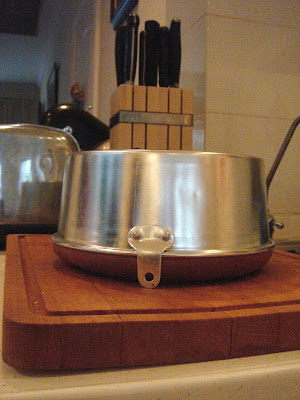 Remove the cake from the pan only after it has completely cooled. 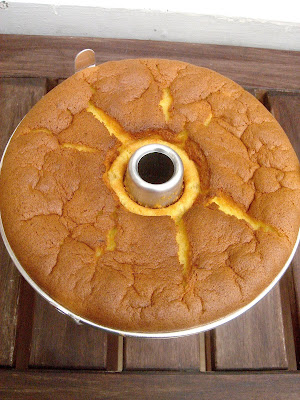 After being cooled for 5 hours - not much flatter, I'm happy to say

It is perfection I can only dream of. I'm lousy at chiffons and have given up on baking them.

How I wish I can pass all my mandarin oranges to you to try and see if can make a mandarin orange chiffon cake? Got lots of them left after CNY cos wife and I down with cough so cannot eat them.