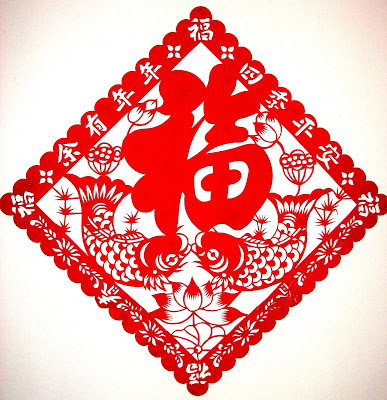 CNY 2012
I left Singapore in September 1995 and have probably celebrated Chinese New Year once before I got married. After that it was too expensive to travel home just for a week, with summer being the preferred period for home visits.
When we arrived in Shanghai last year, it was just a week before the CNY, so we "celebrated" our first CNY in Asia riding on the free-flow firecrackers around us. Shanghai is usually dead during the holidays as its large migrant population closes all shops/restaurants/services and head home, so we weren't too impressed with the experience.
2 months ago we realised that we would be having a week-long break towards the end of January - because it'd soon be the CNY! And the year of the (water) dragon too. We decided to visit Singapore now that we're closer, but many others had the same idea so SQ was fully booked months in advance. We therefore booked ourselves on China Eastern which honestly was a mistake. In this day and age there is still a regular airline that doesn't offer inflight entertainment, that serves horrible meals (piled high on top of the trolley), that doesn't give you a new set of pillows and blankets on a new flight!
Still, it was exciting celebrating my first CNY in 16 years with my family. What I missed was the reunion dinner on the eve of CNY, embracing the traditions of giving red packets and oranges, staying up late, sleeping with lucky money, watching the Hongbao show on TV, checking out the lanterns in the Chinese garden, doing a spot of last-minute shopping in the night markets, visiting friends and relations, lo-hei, wearing new clothes, catching the Chingay procession...everything I have given up when I started living overseas and married a European. 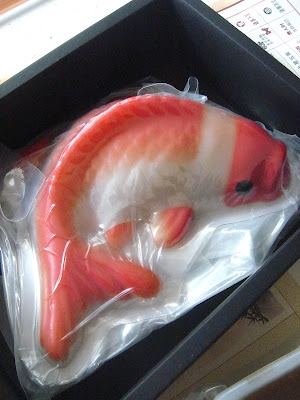 年年有余
When the Teenager was very small, I kept up with a few of the traditions and organised steamboat dinners with Chinese friends during CNY. Then it fizzled out because Hub never seemed interested enough in my traditions, keeping anyway the barest minimum of his own. Then the babies came along, we moved around more and more and CNY just moved to the back of my mind (and priorities).
This year I stuck 2 red paper cuttings of the character 福 (luck, prosperity) on my doors though I would stop there as I personally find it a little vulgar the Chinese obsession with money (钱 or 财) all times of the year. We should wish for good health and for things to go smoothly - and everything else would follow. You could have all the money in the world, but if you do not have the health to enjoy it, it would be worth nothing. 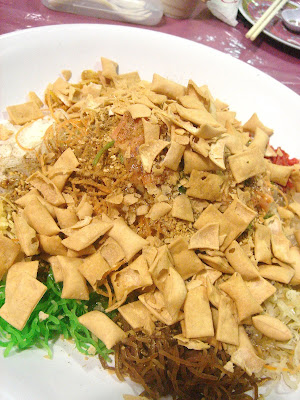 Lo-Hei
Mum had to help refresh my memory of what needed to be done for CNY, though I didn't participate in the praying since I wouldn't be doing that when the parents leave the world. I wanted to visit the night markets but the skies refused to cooperate, sending the rain promised by the Water Dragon down on us almost every evening. 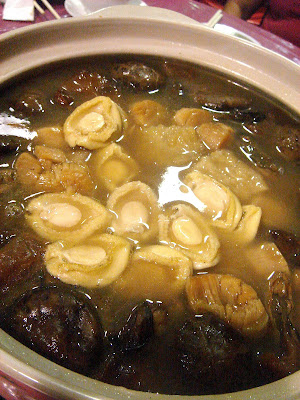 Treasure pot
We ate reunion dinner as a family though : my own, my brother's and my parents. Only my sis was missing, but she had her Hub's family to eat dinner with. It was an expensive meal filled with lucky and prosperous-sounding dishes though the kids and Hub failed to appreciate it. I had my first lo-hei in donkey years - and still only ate the crackers. But I ate through everything else, especially my favourite Kum Hiong 金香Crabs. 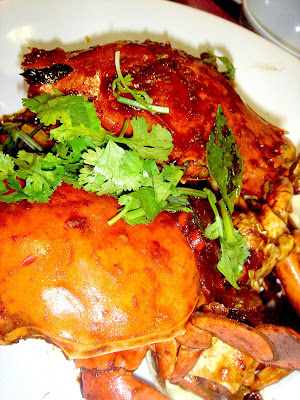 金香Crabs
On the first day we visited my 3rd uncle. It was to be our only visit as most of the relations would gather there so that there would be no need to do the rounds like we used to when we were kids. It was a little disappointing, but let's face it : at my age, most of my parents' older relatives that we used to visit would be dead and we would have little to do with their children or grandchildren. For my parents, with no longer any kids to drag along, they've probably lost most real interest in the visiting so they ended up staying at home watching TV for the past decade. Since we've never been into CNY gambling, we never got into hosting big gatherings either, so all was calm.
This is sad, I suppose. But like everything else there's a time (and place) for celebrating CNY. Take Shanghai, for instance. My Shanghainese friends told me that with small families they no longer see any point in celebrating CNY either. In the big city which becomes dead with most of the migrant workers gone they also fail to gather enough atmosphere for the occasion, having to cook their own meals and just hang around waiting for the shops to open again. Those who can afford it would take the opportunity to travel, since there are basically only 2 holiday periods in China : CNY and the Golden Week in October.
But I talked to my hairdresser yesterday who as a migrant worker went home to his village in Sichuan. There it was the big occasion with waxed meats, big meals (but no touching of sharp objects or fire on the first day), a sharper observance of the traditions, gambling and big red packets. Since he was single, he came home with thousands of Chinese yuan in red packet money. Compared to the 122S$ that each of my kids amassed in their week in Singapore...
红包 money of course is an interesting part of CNY especially for the children. And nowadays it's not like before, you can't usually get your kids to surrender their hoard to you. The amount of money you put into your red packets could also be a study of the differences between the Chinese in different parts of the world.
I was quite surprised to discover that inflation has not reached angpow money in Singapore. When I was a kid (very long ago), we usually received between S$2 and $10. Apparently kids still receive the same amount today 2-4 decades later. A check with my HK and Chinese friends revealed that the Mainlanders (even my driver) put at least 200 rmb (about S$40) in their red packets, if not 500, even 1800rmb!
They seemed a little more reasonable in Hong Kong though, kids usually get between 40 and 80 HKD (in pairs of red packets though) and elderly parents will get much more. I chose to do $6, $8, $12, $18 on average. We agreed that the red packet is a way of giving blessing, so the money shouldn't matter. It shouldn't ruin the giver, shouldn't be a race to see who can give more, shouldn't provide one with yet another opportunity to show off one's wealth. And kids shouldn't become greedy about receiving red packets. There is the whole year for one to show one's family that one cares, why wait for the CNY?
One thing we agreed with Hub and the kids at the end of our stay was that a week is too short a time for visiting Singapore. There was so much I couldn't do, so many friends I couldn't meet up with, so many things I've yet to eat. 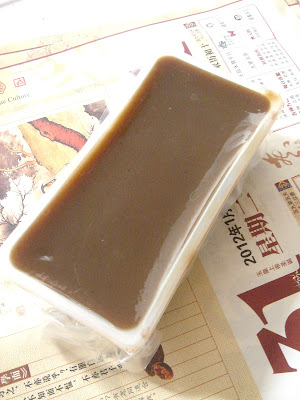 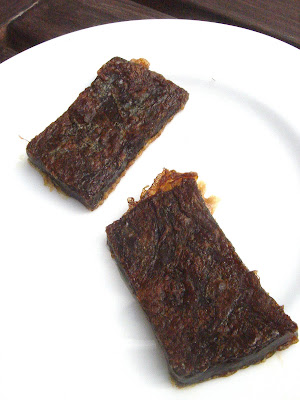 Sticky rice cake dipped in egg and pan fried
We are coming to the end of the CNY - tomorrow? I fried my own sticky rice cake年糕 (offered by Hub's Chinese colleague) for the occasion, nudged the kids to let off a few of the harmless fireworks (to no avail), and will go to bed wondering what I could/should do next year to make CNY a more meaningful occasion for my kids and myself.
祝大家龙年大吉，身体健康，万事如意。
Publié par Beau Lotus 涟 à 10:47

How lovely that you got to spend CNY at home after my years abroad. I fully appreciate your sentiments, having celebrated my first xmas back home in 14 years recently.

Lotus, next time avoid China Eastern if you cannot get SQ. Get Cathay Pacific instead, its a short layover in HK only. Its a lot more pleasant, civil & great on board service. Also avoid Air China.

I know where the Shanghainese went for the CNY holidays. They were in Spore then Bangkok. I was at Changi Airport waiting for the Bangkok flight, a large group of Shanghainese were there too to continue their journey.

@Anne, hope you'll be able to spend x'mas at home more often in the near future!

@Anon, we still prefer a direct flight as Hub hates waiting, will try to book my flights earlier the next time. But am not sure I want to go home for CNY again as it's too short like I said.

I saw them too at the airport, they were buying all the branded stuff they could get their hands on, they seemed to have bottomless pockets.

Wow. I'm envious that you got to spend CNY in Singapore.
Just a question: Is it true that in China, there isn't such things as paid leave? I asked my Ah Yi to go China to visit her daughter for a month but she told me that her daughter would have to quit her office job as there is no paid leave system in China. C'est vrai?

I think it depends on the company, but as a general rule there is no paid leave except for the public holidays like CNY, Golden Week...

I asked the same question just a few days ago of my manicurist and she said she gets a day off each week (while we take that for granted - it's a given!).

My driver gets 7 days a year off, but has to forfeit them if we need him. In exchange he gets our holidays (when we go away which is more than 7 days a year).

The company also closes officially certain times of the year, so the workers get this kind of holidays, I think. You don't usually pick and choose your days off.

Not too late to wish you and your family a Gong Xi Fa Cai ! Happy to hear you had a lovely time in Singapore to celebrate CNY. And great to see your posts again. Yoong (Perth)