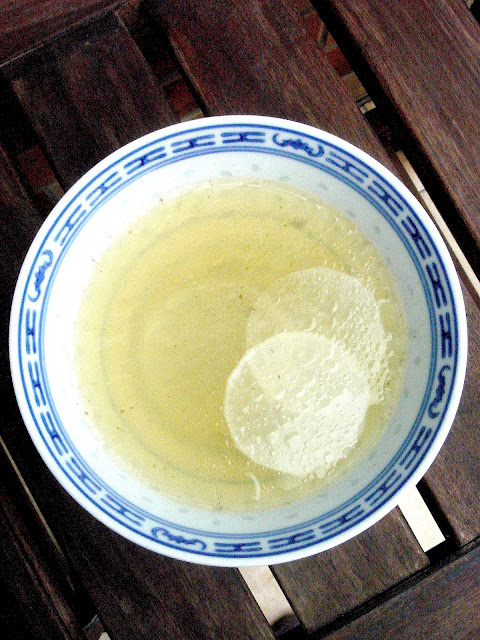 
A typical Chinese household enjoys a nourishing soup and 3-4 dishes for dinner most evenings. In our half-Chinese household, where the European half prefers his soups mushy and thick (like when he was a baby), the thin Chinese nourishing soup doesn't make much of an appearance. Except for the Bak Kut Teh which Hub for some reason loves.

Hub has been travelling quite a lot recently, with a new project starting in Guangzhou and meetings to attend in Europe and elsewhere. In fact he left for Korea on Sunday afternoon and promptly texted me a few hours later to say that he had left his wallet at home. How he expected to pay for his hotel rooms, taxis, rental cars, food etc over 5 days and in 3 different countries across the continents I have no idea.

In his absence I felt the need to affirm my Cantonese roots and started boiling soups a few nights in a row. Lotus root and pork ribs with red and honey dates, herbal chicken...and my current favourite : Daikon (White Radish) and Pork Bone. 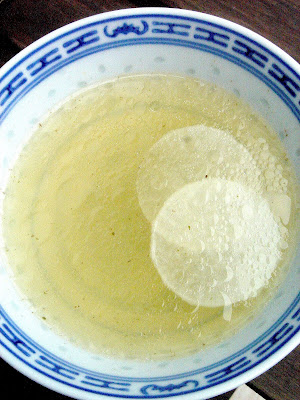 If I had to be frank it probably started when I saw them selling this gigantic pork bone in the supermarket. It looked like the ones you see all the time in The Flintstones. I just had to buy it and since it had no meat on it it had to go into making soup.

I've also been pretty envious of those Japanese ladies seen hugging a nice white daikon root, somehow it spells domesticity, simplicity and a lot of smell in the kitchen once you decide to boil it. 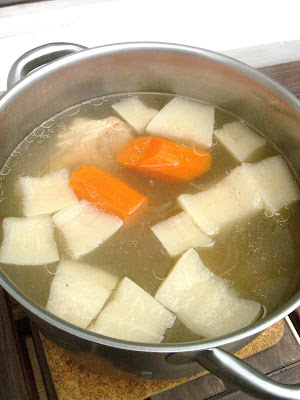 You see one end of the big bone in the picture

But the result was worth the farty smell. Daikon and pork bone make a sweet and tasty soup. It also acts as a sort of laxative so if you believe the Chinese, do not take any vitamins or medication with it. Not something you'll want to consume more than once or twice weekly. Though if you've made a big pot like me (the bone was gigantic as was the daikon), you may end up using it as a stock base for everything else you'll cook in the week, including a curry.

Chinese soups are best consumed immediately but since I wanted to remove the fat in it I waited till the next day.

Bring half a pot of water to boil and place the pork bone in it for blanching.

Bring the water to boil again. It will become quite dirty with scum. Drain the water and rinse the pork bone under a running tap. Clean out the pot if necessary.

Bring a fuller pot of water to boil this time and return the bone to the pot. When it starts to boil again, add the daikon and carrots. Cover and boil on low-medium heat for at least an hour. I usually let it simmer after the first hour for a few hours more.

Can't imagine you buying that flintstone bone. Shld haven't take a picture just for fun.
I too simmer my soup for a few hours. Perhaps Cantonese way?

So did you have to finish up the soup all by yourself, I'm assuming the kids are not into it?