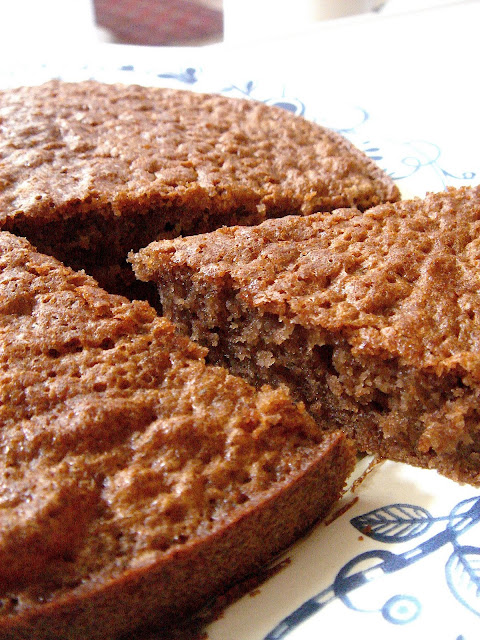 Sarsi is one soft drink that you either love or hate. My Chinese friends said it reminded them of some toothpaste they used to use in their childhood. I only used Lion toothpaste when I was a kid and it tasted of grape or strawberry. Hub said it tasted like medicine. Anyway sarsi is quite like root beer (I believe the herb sarsaparilla goes into making both drinks) and I love root beer.

I decided to experiment with the drink and used it to bake a Sarsi Cake this morning. I used the recipe for yesterday's Light Chocolate Cake, substituting the hot water with the sarsi. The cake turned out to be less tall and had craters on the surface (probably caused by the gas in the drink). The texture was also quite different, I would call it a cross between cake and kueh.

You could taste the sarsi in the cake, but it wasn't strong. I thought of making a sarsi-flavoured icing to go with it, but changed my mind as we've been eating cake almost every day this week. The kids are hyper enough as it is.

After I've finished baking the cake, I cycled from the house (down the path I've been meaning to try) to the kids' school. It took about 25 minutes and was actually quite an easy journey, though I've been sworn at a few times for being on the wrong side of the road. Parked my bike in the school as 3 teachers have already had their bikes stolen at the new mall opposite, so I wasn't going to take any chances.

Shopped at Gap Kids and then ate a bowl of beef noodles in a Taiwanese eatery. I must do this more often. 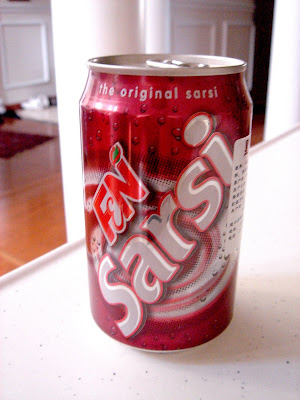 Sift the flour and baking powder together into a large mixing bowl.

Make a well in the middle and break the eggs into it.

Add the sugar and butter on top of the flour (or the sugar may cook the eggs).

Mix the cocoa powder and sarsi together in a separate bowl and pour into the large mixing bowl.

Whisk everything together till you get a smooth batter.

Pour into a paper-lined 20-cm round mould and bake in the hot oven for around 30 minutes.

Craters will usually form in this cake because of the gas in the sarsi so do not be alarmed. The inside of the cake may also have a slight honeycomb structure. 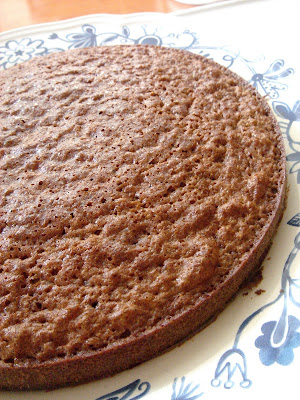 Let the cake cool for a few minutes in its mould then turn it over onto a cooling rack to be cooled further.
Publié par Beau Lotus 涟 à 11:19

You can get F&N Sarsi at a Shanghai supermarket or is it an expat one?

Sarsi reminds me of huat kueh, the steamed sponge cake that old folks bake for pray altars. It does wonders for huat kueh perhaps not so for baked goods.

Your last few cake recipes seem very easy to follow. My hubby is not a cake person, so I don't do any baking (no kids...). Summer heat will be hitting Perth very soon and if you remember A&W's root beer float, that's what we will be stocking in the fridge, root beer! I prefer sarsi but the MOTH(man of the house) likes root beer. Have a great day :) Yoong

I luvvv Sarsi, more so than Cola, especially on a hot day, drink with lots of ice, , good that you can find it in Shanghai.

Great recipe! My daughter is in love with this cake!

Seeing how to make your recipe, you are really hungry. How much will you be able to eat, I am excited to really eat this post in a very beautiful way.
noida call girls
independent call girls

Escort Service In Delhi a dit…

Escort girls in Delhi make independent Brahma; Delhi call girls are always ready to serve you for interested people. Call girls in Delhi have been placed in many categories. Surely we are available according to you, you can come on our website and contact us. Female Escort In Delhi

Escorts Service In Gurgaon a dit…

Welcome to Gurgaon Escort Service. We provide one to one sexiest girls and provide cheap service rates. You can visit our website to take advantage of the service. Cheap Escort Service In Gurgaon