Virgin Voyage on the Shanghai Metro 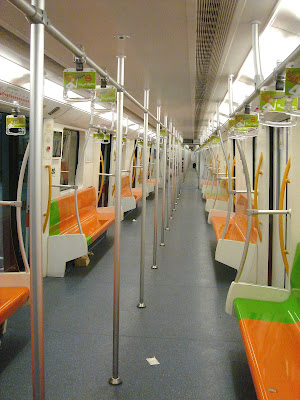 First stop Huamu Lu (line 7)
I've been in Shanghai 10 months and regret to say that I've never gone on its metro - until yesterday. It's not that I do not need to take the train (with Shanghai being such a big city), but I do not have a metro station within walking distance of my house. Nor any bus stops come to think of it.
To get around I depend on Hub's driver (when he's available) or the taxi. Sometimes I cycle to the supermarket when I'm really desperate (and end up eating 麻辣火锅).
Hub's away again this week (and with him the driver) and I had a coffee morning to attend at the younger kids' school yesterday. Near the school a new metro station (huamu lu, line 7) has just opened together with the Kerry Parkside mall and hotel. This gave me the idea to take a taxi to school and then make my virgin voyage on the Shanghai Metro on said line. As it was, a group of ladies were meeting for lunch at a Singaporean restaurant in Minhang. I arranged to meet SW at the lines 2 and 10 interchange so that we could make our way there together.
A few months ago there was an accident in the metro near Yuyuan due to a signalling problem. A train entered into another one creating some chaos and injury. I've also read about how the trains tend to be very packed during peak hours. Added to the general lack of civility among the Chinese, it didn't make riding on the system particularly appealing. 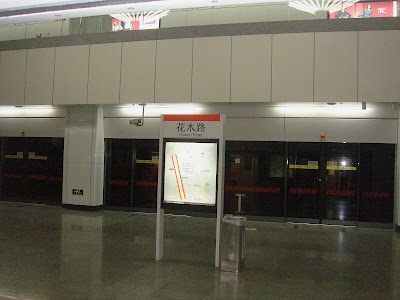 Not a soul at 10am
10am on a Thursday morning was a good time to try out the metro though. There wasn't a soul at the Huamu Lu stop (it being the final/first station), I already hold a public transportation card (used it sometimes for the taxis), the station was clean, brightly lit and the signs simple and visible.
As the train went along, it started picking up more and more passengers but it was still not too crowded. I changed at Longyang Lu for line 2 and then at Nanjing Dong Lu for line 10. So far so good. The trains were quite clean and the system seemed efficient. And it was so cheap : 8 yuan for almost an hour spent travelling on it.
However we still needed to hail a cab to reach our destination. The network is still not as dense as say in Paris or in London. Or you may need to know the bus routes. 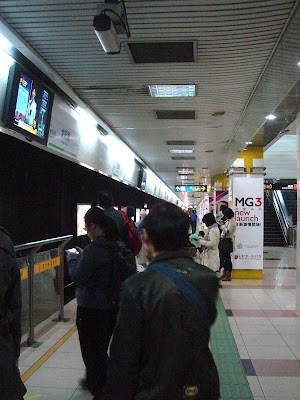 People started moving, train must be coming
On the way back, the trains were really packed and it was only about 3:30pm. I hung on to my bag for dear life and as I was waiting to get onto a coming train (with the Chinese around me starting to crowd the door), I reminded them to have the courtesy to let those inside the train to alight first before we started to rush in. I just felt I had to do it, otherwise from what I've observed on my trip out they just do not have this reflex.
A blind man walked through the train with a helper, playing the harmonica. Most people just pretended that they didn't see him (now who's blind?), some even lowering their heads when they passed. Even if you do not wish to give him anything, you can try to appreciate his playing. In my carriage, 2 European (I think they were Dutch) men and myself were the only ones to drop a coin into the cup. In fact the men actually gave them a 5-euro note, though I'm not sure it may be of any use to them. 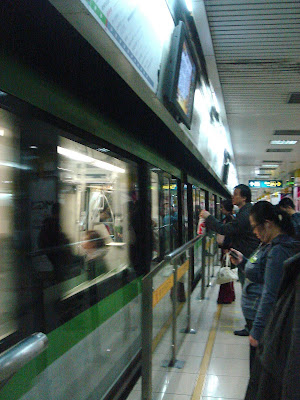 Train's almost coming to a stop
I was standing next to 2 young Italian men. They kept making comments about the Chinese girls (or rather their silhouettes) around them. At one point, they were wondering about what Liujiazui was about and I told them (in Italian) that it was the financial centre. You should have seen their faces.
The experience has been a positive one on the whole and I am impressed with the metro system. Wish I could have easy access to it for surely the way I live in Shanghai would be different if that should be the case.
Publié par Beau Lotus 涟 à 03:04

Lotus, when you reminded the commuters to let those in the train alight first, did they take heed of it or some dashed in first and did they look at you funnily?

I saw a pix a few months back on a regional train station in Suzhou where commuters actually queued up in a straight line to get into the train! Much better than Spore too! So maybe it depends on the city and maybe there is a fine in Suzhou if you don't queue but I don't think so.

Very clean looking train!! When we took the supposedly new and fast train from Shanghai to Suzhou, Hangzhou, and Nanjing, the first thing we did was use the toilet coz before you know it, the stainless steel bowl...yucks, haha!! The train stations at the above 3 places - all stairs only, and be careful if you intend on rolling your bag along the floor surfaces, a lot of spit-spats on the floor. Enjoy your Monday, Ripples! Yoong

I think those at my door showed a little restraint when the doors opened after what I said and one of them kept staring at me throughout the journey (but I think it was more a curious stare than a negative one).

To be fair, I've only taken the metro twice (out and back) so I shouldn't generalise.

Meanwhile there could be rules and practices for the regional trains e.g. once things started out that way people may adhere to them even after.

But definitely everywhere in China the only thing you should do when it comes to the ground is walk on it - with your shoes on.