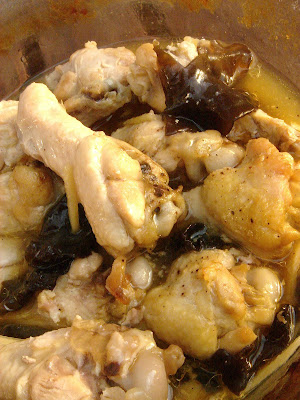 Chicken braised in Hua Tiao Wine
The girl who calculated my fortune said that I wasn't meant to do business because I was too "nice". The kind who wouldn't dare sell anything to the friends for a profit. In other words I'm no entrepreneur.
I was therefore feeling a little awkward when I found myself last evening in a beautifully restored old house in the former French Concession, at a wine tasting dinner that turned out to be a test session organised by a newly set-up wine investment company in Shanghai.
We were 6 : Hub, myself, the American sommelier, the Scottish manager, Hub's married Italian colleague and his lovely and magnetic Shanghainese girlfriend MY. There was also a Chinese girl serving us and a Chef à domicile newly hired and being tested.
They have been in business for quite a long time, even in Singapore, and have arrived in Shanghai a few months ago (everyone comes to Shanghai soon or later). They hope to find investors for good Australian wine. Investors are (rich) people who would buy the wine, have the bottles stored for up to 15 years if not more, not drink the wine, expect the price to go up (hopefully by a lot), and who would finally sell everything at a profit to someone else (who may or may not drink the wine).
Most of the people in the room (meaning except us) were seasoned investors and business people. They don't just like things. When they are interested in something (e.g. sex toys, lingerie, art, cars, whiskey...), they usually also want to make money with it.
I want to get rich, of course. But I have a difficult time trying to imagine buying wine and not drinking it. Or a nice painting and not hanging it up on my wall. I have nothing against sex toys, but I would prefer not to have to buy it in front of 20 other people in the same room. And I'm sure business'd be great when you round up a couple of guys in a room, throw in a few Chinese girls lounging around in scanty lingerie and next thing you know a couple of wives, mistresses and girlfriends get a new set of something sexy.
Anything is possible and there is a lot of new money here in Shanghai. People are bored and they do not know how to spend it. We should try to cash in - just don't ask me how. Ask them.
Dinner was kept simple so that the wines would not be overwhelmed by the food. But there was no real effort to pair the food with the wines either. Conversation flowed rather easily, especially when you have such an interesting character as the manager (between his family's and his own experiences) and the alluring MY.
I've mentioned her in one of my earlier blog posts. We met a few months ago at a company dinner held literally in "her" arena. We are actually of the same age, though of course I'm fat, dowdy and useless next to MY who's tall, slim and pretty like a model, very confident, exudes sexuality whether in gesture or parole (a couple of smartly inserted sexual innuendos always work well with the men, especially European men, you can literally see their minds and other body parts working over time), has a successful career and men running to her for her sexy person, business acumen/partnership, lovely company or all of the above.
Hub asked me if I was jealous (I guess I should be if I were not, I mean when your Hub asked you a question like that it meant he thought that you ought to be, don't you think so?). I think I can honestly say that I'm not. At my age, I have learnt to accept that there are all kinds of people on earth, some better, some worse off. I am envious though, because she seems to have everything going for her, while I'm just a housewife doing nothing exciting except growing fatter and fatter. And even then I'm not doing a good job (as Hub likes to tell me) for my kids are not brilliant academically and my youngest has been really mischievous lately (surely my fault).
But in this macho world I think it's good to see women like MY holding their own. Make the guys salivate, run to you with their tails between the legs, run the show and enjoy it at the same time. This girl smokes cigars, drinks, dances etc. She sounds intelligent, has business acumen and lots of guts. I only wish she could have better taste in men.
Keeping to the theme of wine, though not investment grade, I made Chicken Wings Braised in Hua Tiao Wine today. I've been meaning to use the pyrex dish I bought some time back and this seemed like a good time. I cooked the dish entirely in the oven. If you have a gas stove, a claypot would do great. 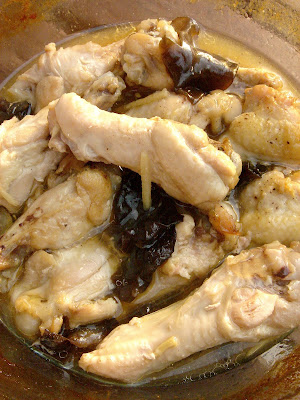 Chicken Wings Braised in Hua Tiao Wine :
a dozen chicken wings
30g ginger (finely sliced)
3 garlic cloves (halved)
2 tsp sesame oil
3 pieces black fungus (soaked in hot water - will become quite big)
60ml (or more) chinese rice wine (hua tiao)
200ml chicken stock
1 tsp salt
Heat up the oven to 190°C.
Dry roast the ginger and garlic in a pyrex casserole in the hot oven till fragrant.
Add sesame oil to brown the ginger and garlic.
Cook the chicken wings in the sesame oil till they render their own fat.
Add in the black fungus (cut into smaller pieces), the wine, salt and the chicken stock.
Cover the pyrex dish with its lid and simmer in the oven till the chicken wings are tender.
Adjust seasoning, and drizzle more wine over the dish.
Could be eaten immediately or cooled so as to have the fat removed. It actually tastes (and smells) even better reheated.
Publié par Beau Lotus 涟 à 04:26

Do you think braising in the wok will be ok for this dish? I don't have a claypot? Yoong

P/S : I dropped you another note to say that the Grape restaurant is at 55 Xinle Rd, Shanghai...not in Suzhou :)

As for braising in the wok (or in a pot), I'm sure it'll work, it doesn't take hours so you don't need a heavy bottom but you may need a cover.

I love your article about this glamourous chinese woman and "fat dowdy" you. It just shows you're happy and contented in your own skin.
And your hubby asking if you're jealous, I think he secretly wishes that you were so that you rush to the gym, lose weight and get into those sexy outfits with 5 inch heels.