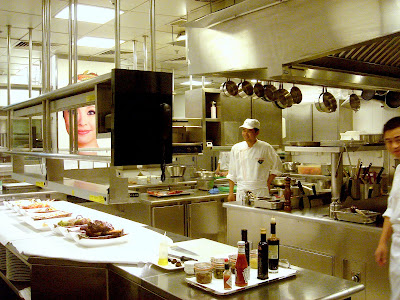 The kitchen @ Jade on 36
I just turned 39. Or 40 if you listened to my mum (who's Chinese - not that I'm not, but...). Anyway it gave Hub the occasion he had been waiting for to try out the champagne brunch at Jade on 36 in the Shangri-La Hotel in Pudong.
We were not supposed to eat another buffet till we've lost some weight. But Hub had been tempted by the caviar and free-flow alcohol while I wouldn't mind collecting a few more points on my Shang Rewards card. So he got us a table next to the window giving us a 36th-floor view of the Huang river. You will notice that unlike other husbands he didn't dare tell the restaurant that it was my birthday - for fear that we would get one of those goose bump-producing all-staff-sing-happy-birthday-to-Lotus scenarios. 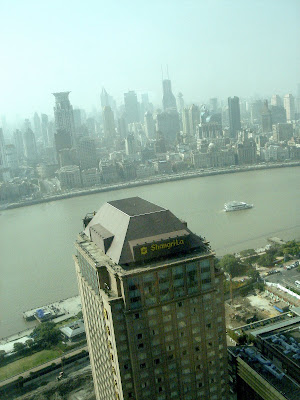 View of the river, the Bund and the other half of the hotel
I must admit that things were a little strained between us in the past few weeks. We have been rubbing each other up the wrong way more than usual lately and nobody felt ready to back down. It doesn't help that he was trying to make us drink soup every evening (as part of said diet) and we (as in the rest of the family) are really getting quite sick of it. Seeing your husband stuck to the WC on his iPhone first thing in the morning when you were running around getting the kids ready for school doesn't help improve your feeling of bien-être towards him either, and when he actually opened his mouth to ask you why you couldn't be quieter...Maybe you get the picture.
Then the French Presidential Elections are round the corner and the French are more-than-ever interested in politics at the moment. Hub and his family have always been peeved that I've some sort of partiality for Sarkozy (which I don't, but you just need to rub them up the wrong way when you see how they can get on their high horses when it comes to this), and would take any opportunity to take me to task for it. 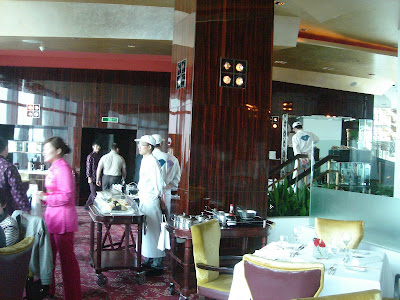 The dining hall
During brunch, while sipping yet another glass of Moët & Chandon, Hub started telling me about how horrible Sarko was (again). I answered in turn that his policies aside, I actually liked him for being true to himself e.g. never bothering to hide his pretty wife, penchant for expensive watches or filthy rich friends. The French have such a thing for never discussing the private lives of their politicians that most of them would indulge in all kinds of weird things behind public scrutiny only presenting a certain face to the world. And that's supposed to be good?
You should see his reaction. He ticked me off : I was shallow, had no reading of politics, how could I claim to have studied politics, I could say such rubbish to the driver but not to him blah blah blah. On my birthday, in a very expensive French restaurant on the 36th floor of the Shangri-La Hotel in Pudong. Was that the way to treat a birthday girl? 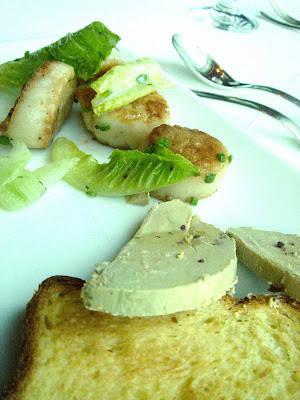 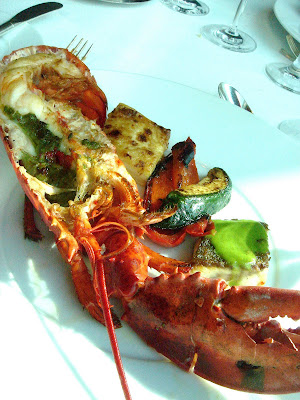 Lobster & cod main course
You get free-flow champagne, red and white wines, water, porto and even coffee. There was also a cheese trolley. 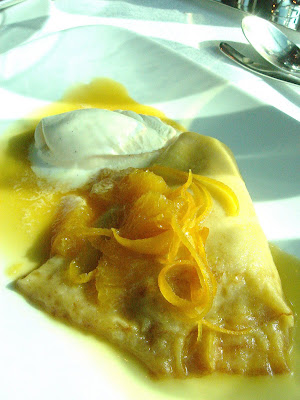 Crèpe Suzette
For dessert, there was an ice cream stand where you can also order a crèpe suzette. It wasn't too bad, lots of orange juice and couldn't really taste the alcohol - the way I like it. Another crepe stand where you can have your crepe prepared with other fillings. A selection of desserts like panna cotta, opéra, mille-feuille, fresh fruit etc were on display in the cellar. I found them so-so however. I am a bit difficult when it comes to French pastries. 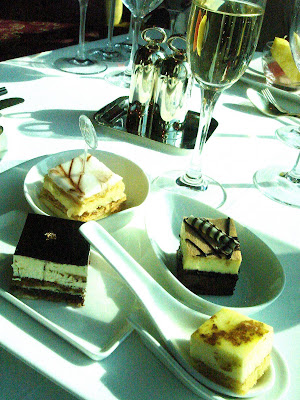 The Shangri La Brunch is about SGD150+ per person, I just worked out the exchange rate. Wow! That is indeed very expensive even in Spore standards. Even the Ritz Cartlon or the Conrad does not charge such high rates per person for champagne brunch in Spore. Personally, I think its a rip off in Shanghai.

I just read a Taiwanese lady's blog on the Waldorf Astoria Shanghai brunch and I think its cheaper. The new hotel looks lovely.

Your husband is a Socialist? But I think the French are very much politically aware than Sporeans that includes French teenagers!

Long time ago, when I was backpacking I came across a group of French teenagers in Rennes who were begging me to sign a petition to reinstate their school newspaper, they said they were entitled to get it free but the higher ups wanted to stop it. I refused to sign it becos I am not French & personally I felt that nothing in life is free. They were quite peeved with me, funnily, there was a French teenager that spoke decent English.

It's probably the caviar - wasted on me since I don't eat it.

There are lots of good brunches here, unfortunately we are too fat to be able to indulge in them.

I too believe that nothing in life is free which is why I tend to be more right-leaning. But the French have gone through many revolutions and wars so they have a different take on certain issues which I respect.

I could never understand why Hub's Socialist since he is not a particularly altruistic person, works for very capitalistic companies and does not do charity work. I think it's the idea/ideology that they are in love with more than anything.

It's great to see you blogging again. I've followed since your Modena stay and when you moved to Shanghai and not blogged as frequently, I kind of missed it. Looks like I have plenty of catching up on the reading now!

I enjoy reading your blog coz when reading the posts, it feels real to me, like I am part of it. And your posts on your fine wining and dining occassions, I don't get that 'look at me and my lifestyle' vibe and the photos are of the food, restaurant or event surroundings only, never of you posing.

It's fab that you're are writing again. Cheers, Yoong

P/S : are you on Facebook, email - somewhere else that I can write more to you?

Hi Yoong, those were very kind words that you've written, thank you very much.

You don't see much of me on my blog because I do not want to spoil the pictures, besides I can see myself in the mirror every day but may forget about all that I've eaten or visited.

Meanwhile we are in China with the Great Firewall, it's already not easy to blog so social networking is even more out.

Please visit the blog when you can and leave your thoughts or comments whenever you feel like doing so. If I can access my blog then (it doesn't always work here), I'll try to reply.

Thank you once again and have a nice day!

We were in Shanghai in 2009 and travelled onto Suzhou, Nanjing and Hangzhou. I like Suzhou, very picturesque along the canal and you see the back doors of the residences opening to the canal. If you haven't been yet, do check out the Grape Restaurant (next door to the Russian Ortho church). We liked their pork belly (yuen-tai) dish so much we went 2 nites consecutively. The wobbly pork belly, yum!! Cheers, Yoong

That's a timely tip, thanks! Will be going to Suzhou with an English friend visiting from Italy soon, will try to check it out!

The Grape restaurant is in Shanghai, at 55 Xinle Rd....not in Suzhou. Haha, sorry for confusing you....I was rambling on about Suzhou and then thought about the braised pork belly! A really melt in your mouth pork belly. Aiyoh, nice! Have a great day. I trust your kids are enjoying the excitement of Shanghai?

Haha Thank God you realised this in time or I'll be going crazy looking for the restaurant in Suzhou. On the other hand, it'll be easier to check it out seeing that it's in Shanghai.

Kids seem happy here though they sometimes miss their friends in Italy. The schools are good here and they get to learn mandarin so I for one am happy to have them here.