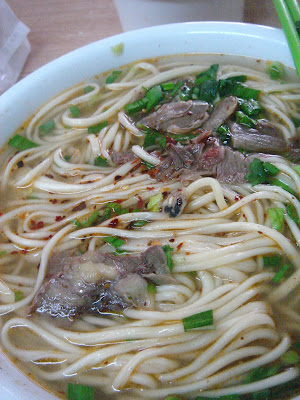 My bowl of delicious Lanzhou La Mian
I have been AWOL for quite a while, haven't I? I have stopped announcing to the whole world that I would be away before I would be away, does it not prove that I have other things to do with my life than spend it blogging?
Actually, I haven't had the time to blog, period. And with the Chinese New Year round the corner, I do not want to tempt fate by announcing on the WWW that my house would be empty. I was told that crime rates are particularly high in the city when the CNY approaches as many migrants return to their hometowns during this period and many would be hard pressed to do so bearing gifts of goods and cash. So if they hadn't accumulated enough in the months before, they may be tempted to steal, snatch, burglar or cheat - or risk going home looking like a failure.
As it was I left my house to my ayi (aka cleaning lady) in our absence and ended up firing her with an sms when I was skiing in the French Alps last month. So I am currently busy unpacking plus I have to do my own housework. Tough luck.
I might as well tell you the story lest I need to email the curious separately with it. I am normally a trusting person. I believe what most people tell me, mainly because I think that everyone should be responsible for their own thoughts, words and actions. So for many months now I have always believed all the excuses that my ayi had given me for not coming to work regularly during the periods I was away - even though I had paid her for it plus given her at least half the time off. Hub wouldn't stop telling me that I sucked at managing domestic help.
The Christmas holidays had been the last straw because not only did she not turn up to work on the days we agreed upon, she had taken to keeping my key even though I had forbidden her to do so. I just felt that this was a classic case of give an inch and take a mile. Since I no longer felt that I could trust her, I decided to terminate her services on the last day of the year.
The weeks before we left for France had been busy too because JW came over from Italy for a visit. I've also been going around doing things with my 2 favourite neighbours, not to forget catching up with friends from all over Shanghai before everyone broke for the holidays. 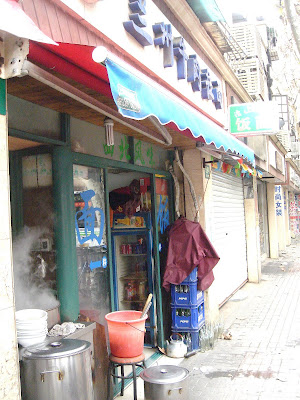 Not a very inspiring shopfront
On one such outing with a local friend and her best friend, I was brought to a Lanzhou La Mian eatery somewhere in Puxi for lunch. I have yet to find the courage to eat in a local place, but somehow I've managed to eat lanzhou la mian twice (and a third time not long after - on my own) in a few months. 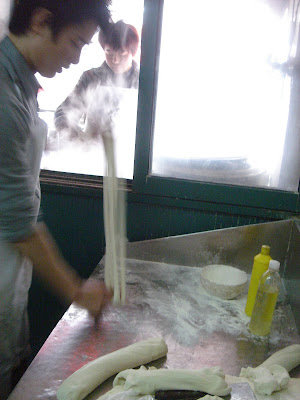 Cutie bum pulling noodles very expertly
My fascination with Chinese Muslims probably helped toughen the stomach lining, plus don't spices help to some extent to kill germs? As if it were fated we were seated right in front of the cute young man pulling noodles for our lunch. The guy had a pair of strong hands not to mention a tight round bum. I made a comment at some point about those hands probably being good for a massage and he promptly offered to let us have a try. I know I sounded like a dirty old woman, but like I said I've always had a thing for these exotic-looking Chinese Muslim men. They made me think of Mirlanbek from such a long time ago... 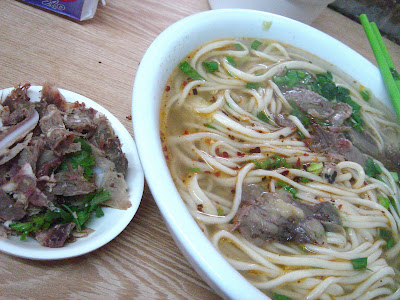 With a plate of extra beef
The noodles were really quite good, very al dente, and so cheap. But all my shameless flirting didn't win me their secret recipe for the broth. Meanwhile I've discovered another eatery in another part of Puxi that I felt did an even better broth though the noodles were definitely better at cutie bum's. 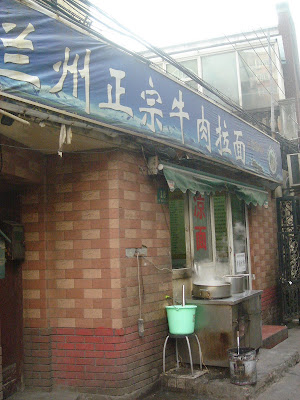 The other lanzhou la mian shop where I ate solo
I feel that I am going to embark on a lanzhou la mian adventure here in Shanghai. And why not? I have decided that I must see more of Shanghai a pied in 2012.
And Happy New Year, by the way!
Publié par Beau Lotus 涟 à 14:10

Ahah! He would have been a Uighur man. My hubby went on 2 Silk Road trips (first, the China route and second, Central Asia) and in Xinjiang, met the Uighurs. But it's great to eat something cooked by some eye candy, haha! Happy New Year to you and Gong Xi Fa Cai to you and family. Cheers, Yoong

Lotus, you cheated us readers by not taking a photo of his bum discreetly!

Did your Ayi take your key & sublet your home as a hotel during your absence? Also good practise to change your locks if Ayi chooses the path of venegance.

Always maintain an element of doubt for domestic helpers. I practise that here in Spore. Safety is always best for your family.

Have a good CNY break wherever you are headed!