A Weekend in Suzhou with JW (Part 1) 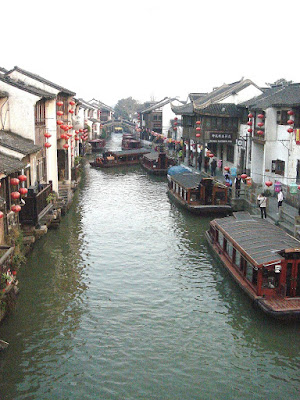 上有天堂下有苏杭
-- Chinese saying.
I must have mentioned somewhere that we get quite a lot of visits here from both friends and relatives. Dieting, for a start, is as such impossible. After MIL returned to France, it was JW's turn to visit - this time from Italy. Though for those of you who have been with me for a while, we all know that JW's very English, buttered scones and all.
She first came to Shanghai about 7 years ago and the city has metaphor-sized since. Pudong probably was still partly farmland then and the exciting stuff only happened in Puxi. This time she landed at Pudong airport and was picked up by our driver Ju. In those days I still had an ayi to vacuum and mop so I was seen in my full glory so to speak. Hub even timed his business trip to Europe quite nicely (a coincidence really) so that we had the car most of the time.
It was nice to see J. To know that I have not been forgotten by friends in my last destination. 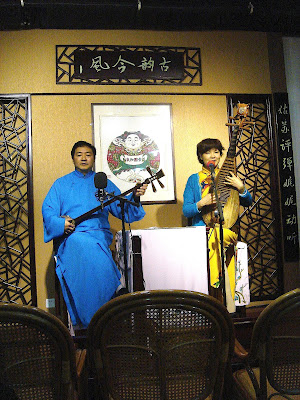 Traditional pingtan performance
With most afternoons paralysed by the kids and their schoolwork, I tried to make it worth J's visit by keeping us occupied most mornings. We visited a couple of tourist spots, shopped a bit, attended a xiaolongbao 小笼包 cooking class, lunched at nice places, taught the neighbours how to make pasta, and made a short weekend trip to Suzhou. 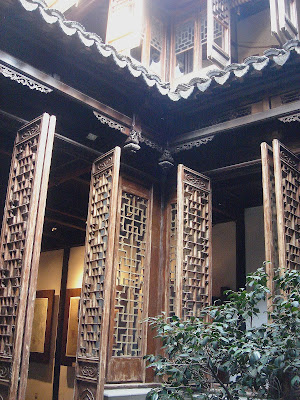 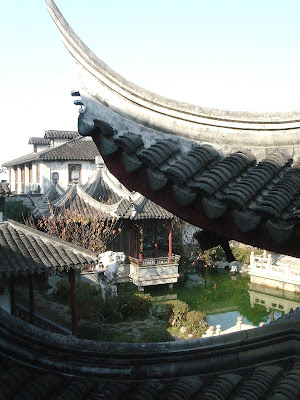 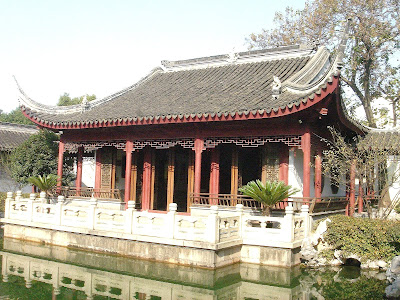 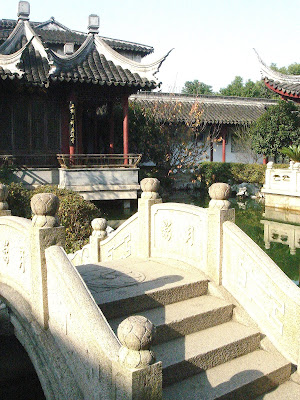 Inside one of the gardens in Shantang
Even before coming to China I have heard of Suzhou (Jiangsu Province) and the beauty of its meticulously designed classical gardens that have been added to the UNESCO World Heritage list in 1997 and 2000. Once here I was told that it is an important centre for silk in the country and the location for an industrial park set up by Singapore. 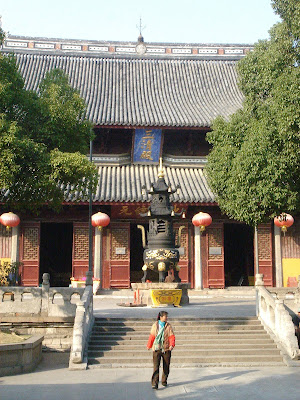 Xuanmiao (a Taoist temple, Song Dynasty architecture)
It would have taken about 2 hours to reach Suzhou from Shanghai if there had not been a traffic jam. We stayed at the Holiday Inn Jasmine which I would recommend. The hotel was conveniently located in the heart of own, offered a good view of the surroundings and was clean and very comfortable. The breakfast spread was decent and my only complaint was the noise that came from the streets below that plagued us through the night. 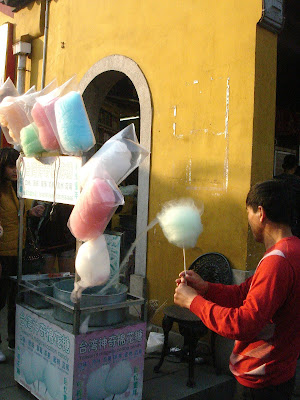 Candy floss near the temple 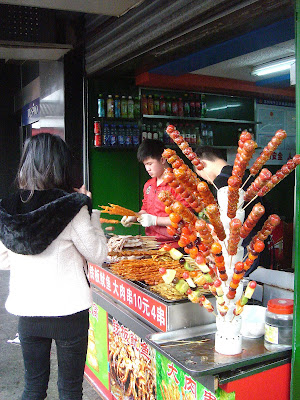 Street food : meat skewers and haw sticks
There is quite a lot to see and do in Suzhou, I do not know how anybody could do it justice by staying just a day. In our case we spent our first afternoon there visiting a Taoist temple (Xuanmiao 玄妙观) and the famed pedestrian shopping street before it, followed by the 1200-year old Shantang Street 山塘街 which has a canal with old elegant bridges running through it. We returned to Shantang street the next morning for a cruise and a traditional Pingtan song performance and only had time to visit the famous Humble Administrator's Garden 拙政园 before we had to return to Shanghai. I would have liked to visit the Silk Museum but I guess it'd have to be for another time. 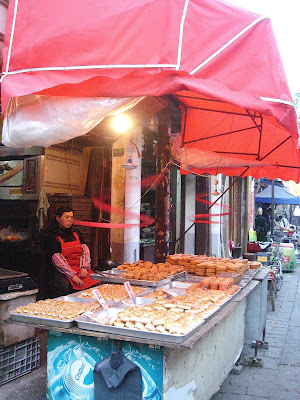 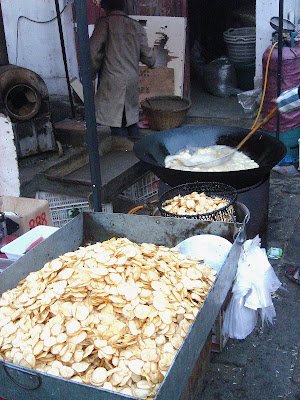 Potato chips, anyone?
The very touristic Shantang street seemed to be succeeded by a dirty, seedy street only frequented by locals. We decided to check it out and found it quite interesting, with its own micro world filled with fishmongers (selling fish out of pails in the street), biscuit and bun sellers, knitters, small boutiques, poultry shops, restaurants etc. 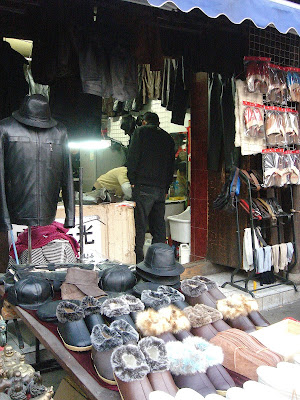 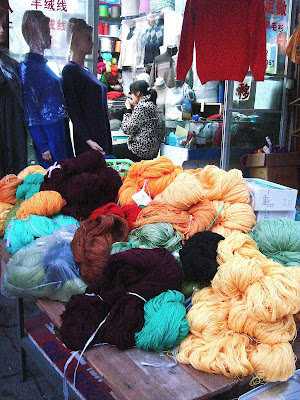 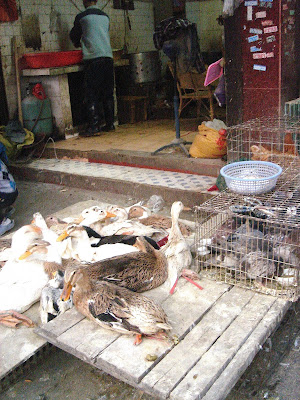 Live poultry
Otherwise Shantang street itself was quite charming with nice little shops many of them selling silk - but we nearly expired from the horrible smell coming from stinky tofu which seemed to be sold almost every where! 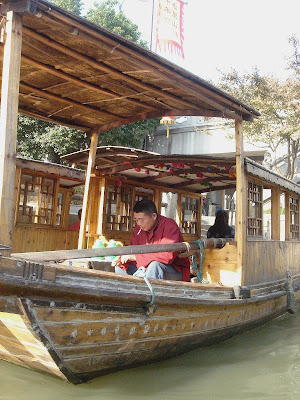 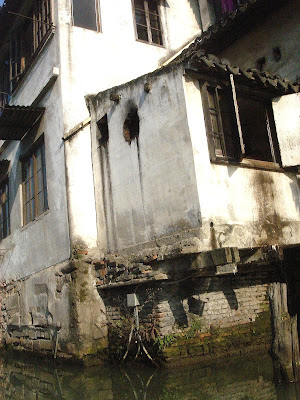 According to our boat master the waste is collected, not drained into the water 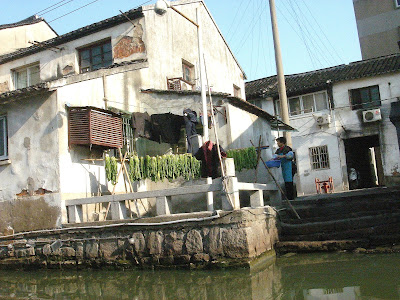 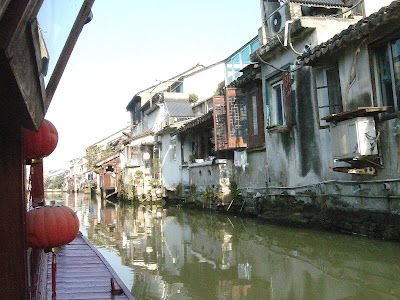 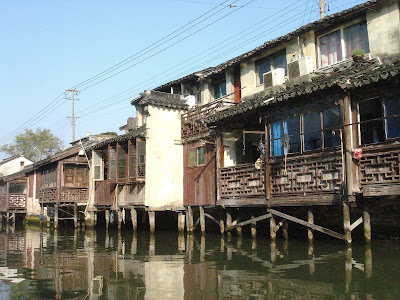 View of the Shantang Street village from the boat
Lunch was in an old local noodle shop 陆长兴 - a difficult moment for J who had little time to get used to eating local. We did better for dinner, going upmarket at the 2-century old Song He Lou 松鹤楼菜馆. We didn't realise that the portions were enormous there and ended up eating way too much. I had a bout of the tourista that evening, killing my enthusiasm for local food the next day. 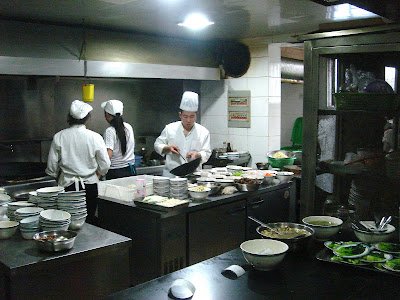 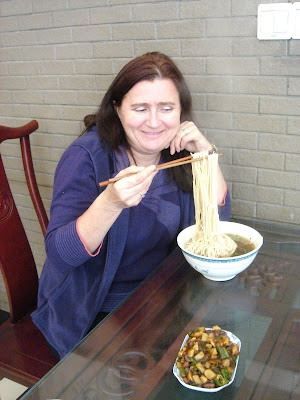 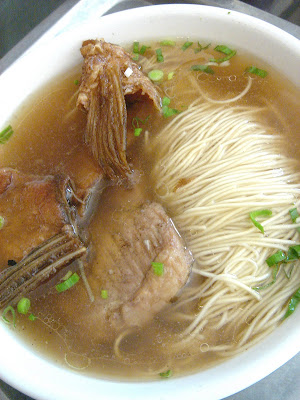 My fried fish and pork rib noodle soup (so-so)
We were our fellow passengers' object of interest on the sightseeing boat. It turned out that we were all born in the year of the rat (though not necessarily of the same decade), they were excited to have 2 foreigners in their midst and of course we found ourselves part of a photo album to be pointed at and talked about in the years to come. 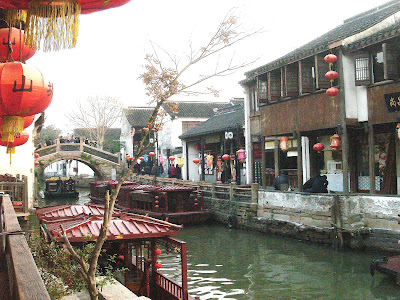 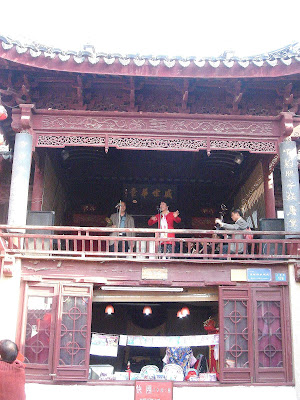 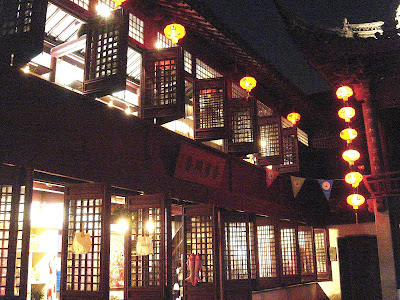 shantang@night
On our way back to Shanghai on the second day we thought of visiting the sex museum in Tongji. But were thwarted in our plan by the high entrance ticket prices (just for the old water village, museum not included yet). A resident of the village turned up and offered to bring us in for a reduced price (an example of corruption at the local level), but we decided not to collaborate so we gave it a miss. We left her screaming at our backs, seemingly frustrated at having missed the chance to earn a quick buck. 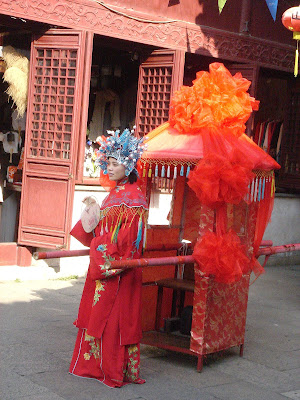 (probably a spinster) posing for a photo in ancient wedding gear (no groom in sight)
I would want to return to Suzhou for another visit in the near future. There are still pagodas, temples, gardens and of course the silk museum to discover.
Publié par Beau Lotus 涟 à 16:42

Happy Lunar New Year to you. I wanted to go Suzhou during my recent trip to Shanghai but too bad, we running out of time, so we did not make it..I must visit this place if i visit Shanghai again.Thanks for the beautiful photos and info.