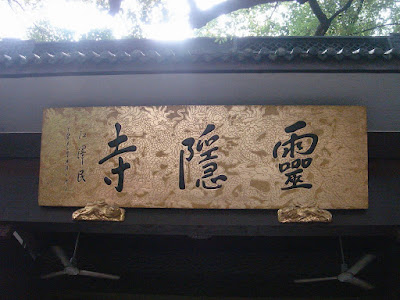 Lingyin Temple, Hangzhou
MIL (facing courtyard of Cheng Huang Temple in Yuyuan) : I've already visited this.
Me (big puzzled frown) : This is not possible. You've never been here before.
MIL : I've already seen this with my son.
Me : This is even more impossible. He only brought you to Zhujiajiao since you arrived in Shanghai.
MIL : It looks the same.
How many times have I said the same thing after visiting a few cathedrals and churches in different European cities in the past 2 decades? Yet we would continue to visit one each time we arrive in a new city - because that's usually the thing to do.
So MIL was on to her 2nd Chinese temple - and thought it looked just like the first one she'd visited. Which is fine by me, only that while European churches usually offer free entry, most Chinese temples charge for it. So I wanted to make sure that we got some value for my money and I dragged her to every nook and corner to take a closer look at the gods, pray for peace and fortune and just short of greater fertility because quite seriously I do not need help in that direction.
I was tempted to seek divine intervention for the Teenager's grades, but thought finally that I should keep that for our visit to the Notre Dame de Paris. I do not speak Shanghainese and Cheng Huang is after all the city's god and was dead long before Mandarin became the official language.
Anyway we would have the occasion to bring MIL to her third Chinese temple - the very important 灵隐寺 in Hangzhou. 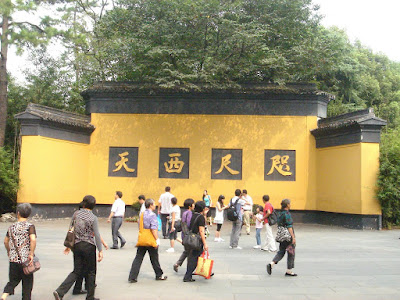 Yellow wall = 1st class
Temples in China are classed according to colour and when it's yellow like Lingyin, it's first class. In fact Lingyin is one of the wealthiest (not surprising seeing how costly the entrance tickets were) and largest Buddhist Chan (Zen) temples in China, containing many pagodas, grottos and religious rock carvings. 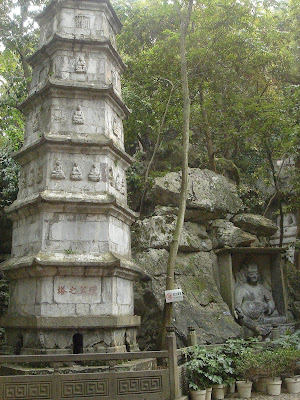 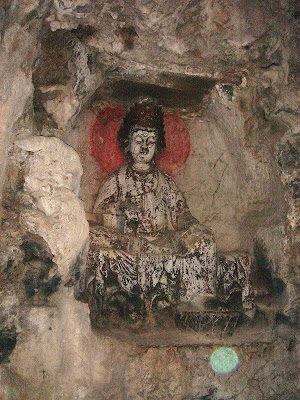 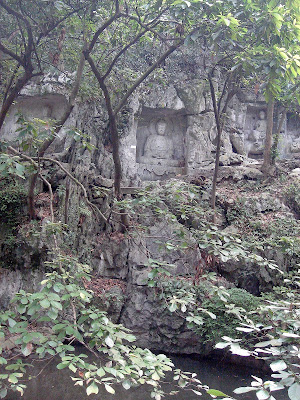 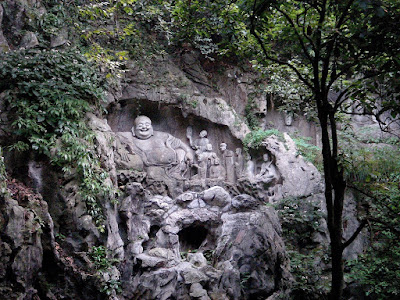 Laughing Buddha
It was founded by an Indian monk Hui Li who now lies at the foot of the Feilai Feng pagoda. The pagoda fronts a limestone peak containing a large number of caves and grottos with quite amazing carvings all over. Within the cave dedicated to Guanyin, there is a crack in the ceiling that stretches up to the surface, so that a person standing at a certain position can see a sliver of sunlight (一线天). I couldn't see anything, of course, not caring to overstrain my neck and eyes. 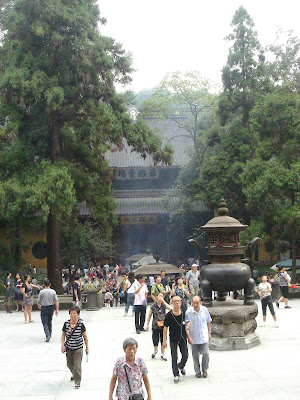 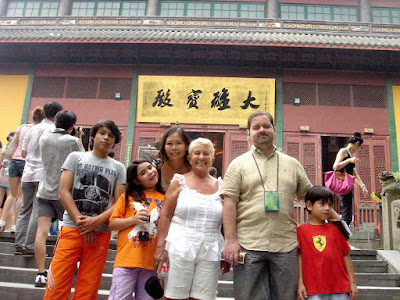 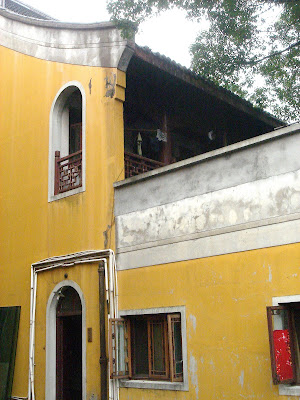 The temple is divided into a number of halls and my favourite was the one containing this large benevolent-looking Buddha statue carved from camphor wood. The back of the hall contained a statue of Guanyin backed by a large screen containing carved images of some 150 Buddhist personalities. 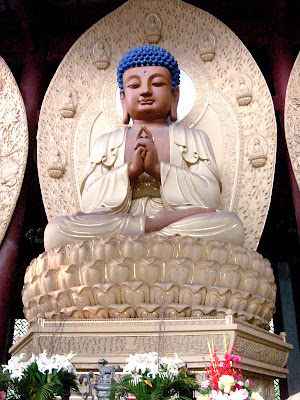 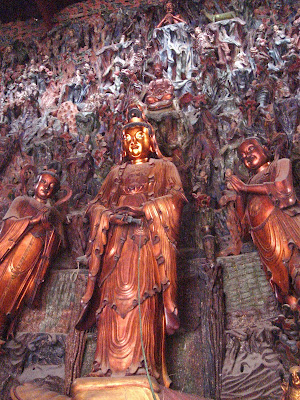 Guanyin
There was also a Ji Gong Hall, one dedicated to the Medicine Buddha and a hall containing bronze statues : Hall of Five Hundred Arhats. I've always said that most Chinese temples frighten me because of the heavy presence of large ferocious statues, though I was always happy to visit one back in Singapore when they offered free vegetarian food on special occasions. 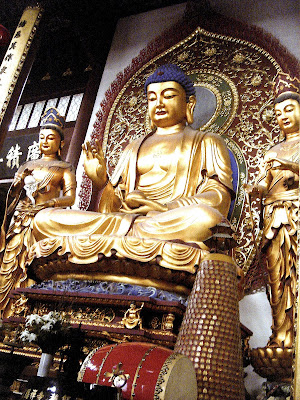 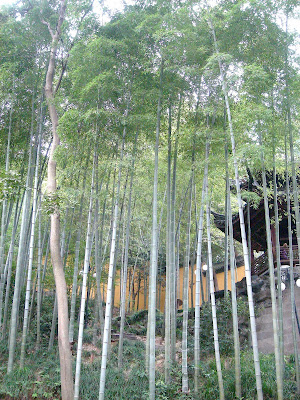 I must say that the gardens and temple had been worth the visit even though we were dying from the heat. The price was quite steep (e.g. 45 rmb pax for the gardens and 30 rmb for the temple) especially when you have to pay for so many people and if you hire audio phones you need to leave a 100 rmb deposit. Plus those in Mandarin cost 10 rmb while those in English would cost 40 rmb! They also do not offer discounts to senior citizens who do not carry a Chinese passport. 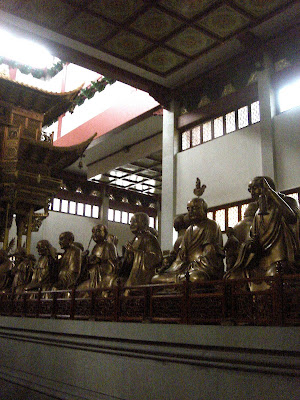 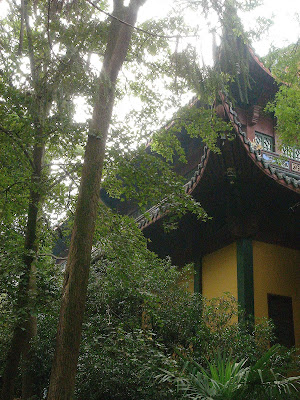 We didn't spend too much time in Hangzhou as Hub was busy with work and had to prepare for a business trip to Europe just after. He was also sulking about having to share his space with so many other tourists, claiming that they spoilt his enjoyment of the beautiful scenary. Bear with us, it was just 8 months ago when we left our big field in Italy and we are still trying to adapt to being surrounded by so many people every where we go.
Publié par Beau Lotus 涟 à 18:02

hi,so good to see some updates from you. continue writing. always enjoy reading your posts cos' most are funny. hope that's what you want to hear.
Have a good time in france.