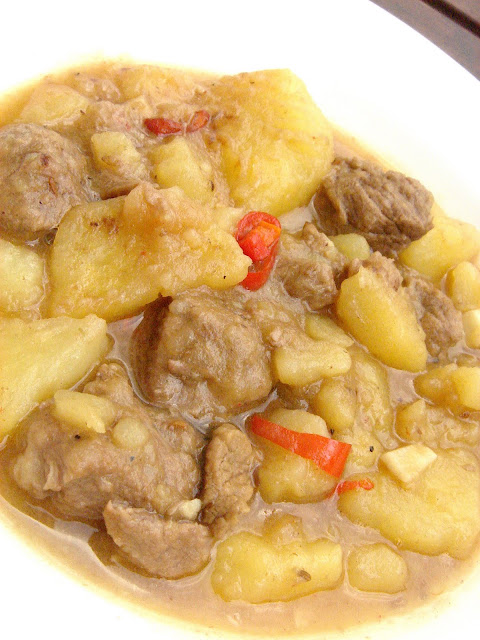 Lamb with Potatoes and Szechuan Vegetables

We had gone the rustic way during our Hangzhou visit based on a recommendation from one of Hub's Chinese colleagues. I could barely believe it when Hub sent me the guy's email containing a link to a...Chinese Youth Hostel. In my middle years it hardly seemed appropriate to rough it out (much as we're quite broke now after summer) and added to that we had the MIL with us.

But said colleague insisted that the rooms were clean and more importantly, he added that the food (home-style) was delicious and not to be missed. Apparently as a client of the hostel you get priority seating and since the restaurant tends to be full, this would be most helpful.

When we were ordering our lunch, the waitress suggested that we try their house special "beef with potatoes and salted vegetables". I was hesitant upon hearing the word "salted vegetables" but Hub and his mother said they wouldn't mind trying the dish so I ordered it.

It turned out to be simple but good, a cross between a beef stew and a potato salad, with a slightly sourish and salty taste and between mouthfuls, you discover bits of what seemed to be cumin. Since I had a packet of szechuan vegetables in the pantry and half a leg of lamb left over after using the other half in a lamb stew (a simpler version of my Irish Stew and a hit with the family), voilà Lamb with Potatoes and Szechuan Vegetables 柞菜土豆羊肉for dinner this evening. 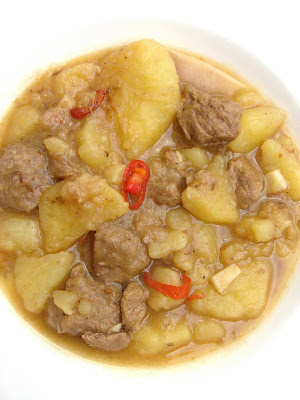 Heat the oil in a casserole and fry the onions, garlic and ginger till fragrant.

Fry the lamb cubes in the fragrant oil and add black pepper to taste. There is usually no need to salt the dish as the szechuan vegetables will be salty enough.

Cover the meat with the hot meat stock. Cover the casserole, lower the heat and let the meat simmer for at least an hour or till it melts in the mouth.

In a separate frying pan fry the potatoes in a little oil till both sides are lightly browned. Add them to the lamb stew and cook till they are soft (maybe about 30 minutes). It depends on how mushy you like your potatoes but in my case I prefer to still see pieces of the vegetable.

If you like your dish sourish, stir in a bit of white vinegar. Best served hot with steamed jasmine rice.

Baby Boy refused to try the dish in the restaurant, but said that since his mummy cooked it, he would this evening. It was a pleasure to see him serving himself at least twice, he loved it!
Publié par Beau Lotus 涟 à 03:59

I was surprised as to how tasty it was when we had it in the restaurant, so was eager to experiment before I forget about it. Made me realise that I should find the courage to eat more often in the local places.