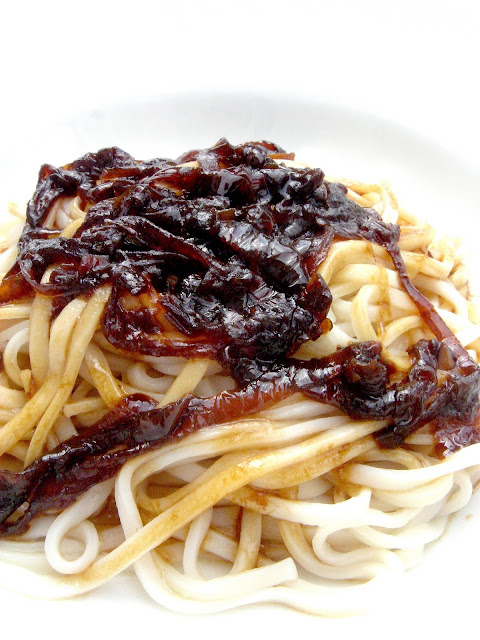 
I ate this at 鼎泰丰 (Din Tai Fung)'s Yuyuan branch a few weeks ago when I brought MIL there to try its famous xiaolongbao and became quite hooked on the simple noodles. Visions of caramelised onions filled my head for days until I couldn't stand it any longer.

The bathroom scale has run out of battery and I could no longer weigh myself until I get new ones (those round flat 2430s are really expensive) - and you knew that the batteries were running low when you were weighing 70 kgs and still eating tonnes of carbo one night and suddenly before your very eyes the weight kept decreasing till you were weighing 50 (I do so wish). Sigh, I really wish I could stay away from the rice and noodles - especially at night - but I couldn't and so you now get this piece on my Caramelised Onions on Noodles 葱花拌面.

I bought an enormous yellow onion from the supermarket a few days ago and surprisingly needed only half of it to make this dish. I ate 2 portions of noodles the other day and still have a small bowl of caramelised onion sauce left - probably enough for another 2 portions. If you are running on a low budget, give the cheap spaghetti a miss (used to cook penne with BBQ sauce almost every day when I was a student in Paris, adding cheap Frankfurt sausages from ED/Leader Price occasionally for the protein) and go for this onion noodles instead. And didn't I read somewhere that yellow onions have antioxidant properties, can improve men's sexual prowess etc? 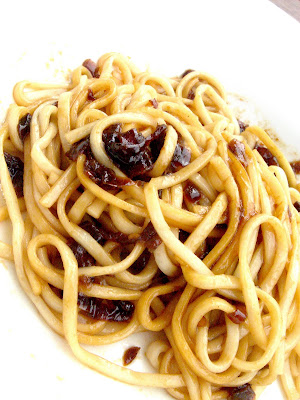 Heat the oil in a small casserole with a lid and fry the ginger, garlic and chillies till fragrant.

Add the onions. Fry till they turn brown, lower the heat, cover the pot and let them sweat, stirring from time to time to prevent burning.

They will become soft and brown. Pour in the wine and stir in the sugar, but only after the onions are already brown.

Stir in the soy sauces to provide colour and salt to the onions. Only add in the vinegar towards the end or it'll evaporate too much. Taste and adjust the seasoning if necessary (it should taste sweet, salty and vinegary). Add some hot water if necessary to dilute the sauce.

Cook and drain the noodles. Immediately toss with a dash of light soy sauce and sesame oil.

Divide the noodles into serving bowls and spoon some of the caramelised onion sauce on top. Add pepper to taste. Mix well before eating.

I am now busy packing. We're leaving on Wednesday morning. The kids will have to miss a few days of school but I'm sure it'll do everyone some good to be back in France. We're going to bring them to Paris for a few days. They were all born in the capital, but left France when they were very young. The Babies have almost no recollection of their time in the city - something we hope to remedy. I've already bought tickets to the Eiffel Tower, Cité des Sciences and hopefully we'll find time to visit Montmartre, the Latin Quarter and the Champs Elysées as well.

thanks for leaving your comment on my blog (a while ago!) and i'm glad to have found yours - i'm learning a lot from you! places to go in shanghai, recipes to cook, what ingredients to get, etc...!

my background's kind of similar to yours: i'm a malaysian girl who spent some time in Australia and Europe, and only moved to Shanghai 5 months ago for work...and I'm totally loving this crazy city! :)