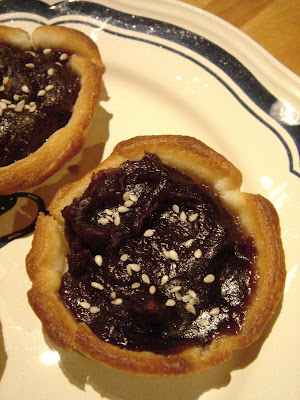 Red Bean Paste Tartlets
We spent Christmas Eve enjoying a delicious French/Indian/Thai dinner in a lovely English home - which sincerely was very much welcomed. The initial plan had been either (a) to have the family over for Christmas (and where would they sleep? There are no longer any beds in our guest rooms) or (b) drive/fly/take the train to Paris (in the current icy conditions) - just before we go on our ski holiday/move!!!
Hub doesn't realise it at times, but he can be so unrealistic. I may often be masochistic, but I am not mad. Had to put my foot down on his crazy plans and insist that he choose between his ski holiday or Christmas with the family (resources are scarce and so is time). Predictably he chose the former (so much for his sudden need to see his mum and sister). I then proposed a compromise : we would see MIL just before we leave Europe for China. It wouldn't be for Christmas, but we would still have met up before we move to the other side of the world.
I would rub it in ("Imagine if we had followed your harebrained plans...") every now and then this week when I saw him going out in the evenings for his farewell at Ferrari, hanging around taking his time to sort through his things in preparation for the move...
Last chance today to clear out the food in the house. We leave for Risoul (French Alps) tomorrow to ski and will move to Shanghai a day after we come home. Via Germany and France. By train before we fly. Long story, if I survive and have the chance to blog in China, will tell you about it. 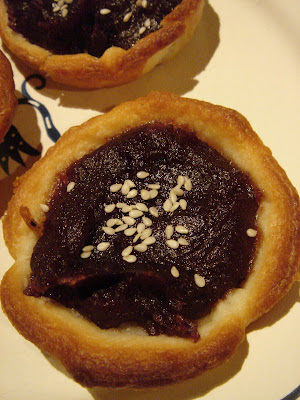 Baked a batch of Red Bean Paste Tartelets this evening and it was the Teenager who ate them all singlehandedly. He's ready for China.
Merry Christmas & Happy 2011!!!
Publié par Beau Lotus 涟 à 19:25

How are your babies taking the move? Are they sad that they have to leave their friends and be very far away this time?

They are actually looking forward to the move. They like the thought of a new house, new (and bigger) school and lots of Chinese food.

Besides, if they do not leave their friends, the friends will leave them anyway at some point. We are almost all expats in the school...

And my family is already preparing to visit us in China in June...

Lotus, may have some bad news on Skype front. There has been some news a few days ago on some Shanghai expats blogger sites that Skype was recently declared illegal in China based on their Telecom Act.

But I think you can still ask your husband to try his company's intranet for access to such banned sites. Usually MNCs intranet will provide a smoother access compared to those retail subscribers.

Friends would be relieved to know that I'd be forced to shut my trap when in China... :-)