My First Time in China 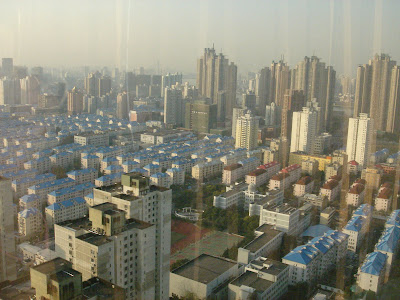 View from our hotel room on the 38th floor
I must have mentioned before that I have Chinese origins. Though for a very long time my passport said that we couldn't go to China, People's Republic of. Things have changed quite a bit in the last 2 decades - but I have somehow stayed behind and have never cultivated much of an interest in the country. In other words, China wasn't one of my dream travel destinations.
It doesn't mean that I am not interested in my roots. On the contrary, I was the only one in my generation to have written to our cousins in the south when I was still a teenager, and I am keen to visit our ancestral village in the near future. It's just that I'm hotter about Ayer's Rock than the Great Wall of China. And I want Tibet to be free.
We flew to Shanghai last Sunday. On Air France, business class, with foie gras and Fauchon teabags. They had a Chinese interpreter on board, who kept asking me if I wouldn't want a Chinese newspaper. I can read French probably 5 times faster than I can manage Chinese. Told her to check me out again when I'd have gone for torturous refresher Chinese lessons in the near future. 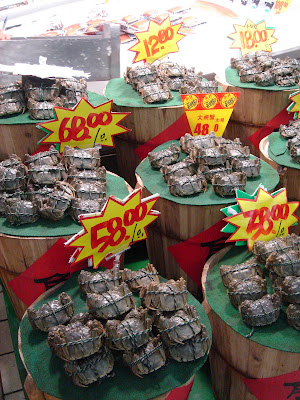 Hairy crabs in Carrefour Jinqiao
How do I feel about finally landing on the Mainland? Cheated, if I had to only use one word to describe it. I mean, what happened to the bicycles and Mao suits? Have I turned up too late? Or is Shanghai just not really China?
There was a chauffer-driven car waiting for us, we were whisked off to our 5-star hotel in Pudong driving on new, modern highways, passing by tall, modern, shiny-new buildings and stopping occasionally to allow fashionable Shanghai residents to cross the roads on their way to work. I felt robbed of an "authentic" China experience; I knew that I have turned up too late.
But I appreciate the rather clean toilets in the few places I've been to. Now I remember why I wasn't hot about China : I was afraid of the unsanitary conditions of their sanitaries. I had just been waiting for them to clean up their bathrooms. 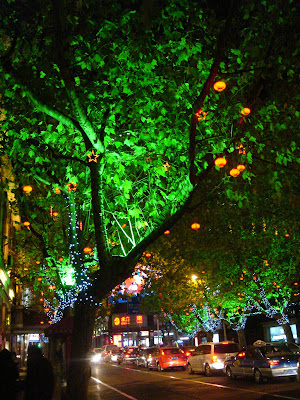 Festive lights in Huaihai Lu, Shanghai
Hub was there to collect his new working computer/email and check out the people who will be working for him soon; We were there to visit 7 schools in 3 days and hopefully also a few houses. The schedule was tight and I was suffering from lack of sleep. And half the time also from indigestion as the restaurants there were very good and we were eating more than we should have. 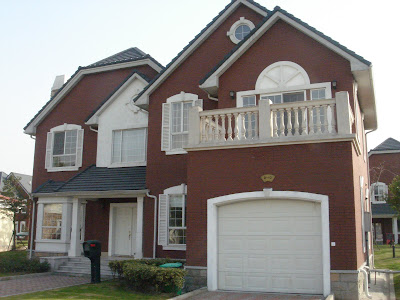 A house that we may wish to rent
Just in Pudong itself, we could choose from more than 7 International Schools and each one was bigger and more beautiful than the last one. The facilities could include anything from 350-seat amphitheatres to indoor pools, roof-top gyms and a school orchestra/band. In the Middle/High Schools, most have individual lockers, wireless environments and require their students to have their own Macbooks. To think that I still have nightmares of the wobbly overhead ceiling fan in my Primary school classroom, and when I was in Junior College, half the classroom would be flooded each time it rained.
After the 1st 4 schools (and all have at least 2 campuses each), we cancelled the remaining 3 schools to visit and signed the 3 kids up with 2 different schools. The school holidays will be different and both schools are at least 40 minutes apart from each other - but we felt that since the children are so different they deserve to be placed in different schools that will meet their different needs.
The Babies will go to an International School with a Hong Kong/UK-curriculum that offers co-language teaching. The school is known for its good IB results and strong emphasis on Chinese, offering the children compulsory violin lessons, for example, that are said to help fine-tune their hearing making it easier for them to learn Mandarin.
The Teenager will go to a small American International School that offers the IB Diploma. The school campus is new, built for 1000 students and currently only having 220. The facilities are therefore very good (e.g. indoor pool, black box theatre...) and most textbooks are available as e-books (they all have their own Macbooks) meaning lighter school bags. He's 3-4 years away from the IB Diploma exams so we really want to make sure that he would be happy and comfortable in his next school. 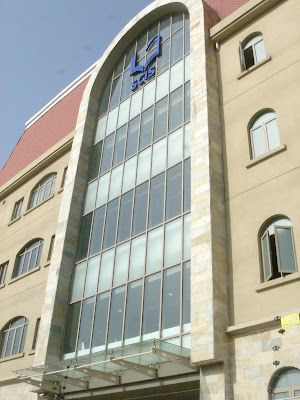 The Teenager's new school
We visited a number of houses (about 350-600 m2 each) in a few compounds but couldn't fix on one since there would always be something that we didn't like about the place e.g. the house itself, its garden (or lack of), its clubhouse, location, heating system, kitchen etc. But the relocation agent now seems to have quite a good idea of what we like, so we'll return in January and continue our search. We would stay in a hotel for a few months while waiting for our shipment to arrive from Italy - just as well since I would prefer to explore the city instead of spend my arrival unpacking. 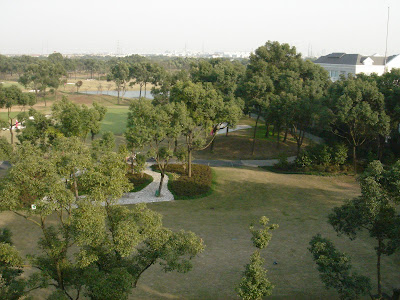 View of Tomson Golf from a house we visited - house was too big and had too much marble for our taste
There is a Peking duck restaurant in the hotel so we dined there one evening. Excellent duck but bad service. In fact bad service is generally everywhere since from what I could see, the Shanghainese are often loud, sour-faced and rude. But as long as the food is good... 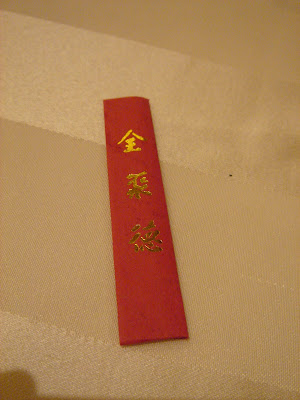 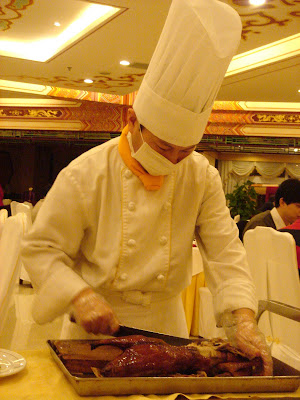 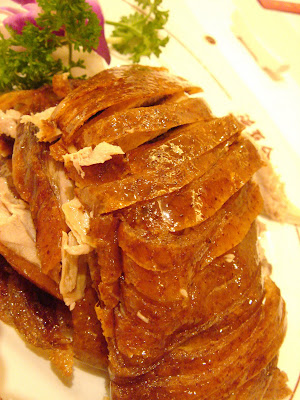 Peking Duck
We have been introduced by a family friend to the French GM and President of 2 other MNCs in the same sector and they brought us out to dinner : the former to a lovely Szechuanese restaurant and the latter to New Chinese cuisine (a Tung Lok group restaurant) both in the French Concession. Our relocation agent was impressed with the fact that we've been to these restaurants - since you usually do not know about them until you've been around for a while. He himself also brought us out to lunch on 3 occasions and they were mainly Cantonese restaurants since I've been telling him how much I prefer Cantonese cuisine. I think that just trying to discover all the good restaurants in Shanghai will take us a few years so we're happy to start soon. 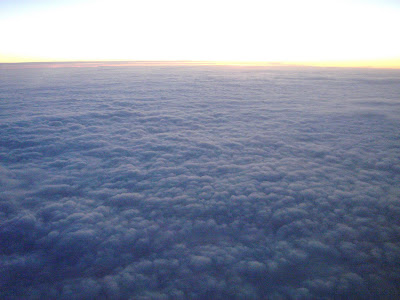 Flying above the clouds
Our first impressions of the city are therefore largely positive (except for its traffic and horrible drivers, not to mention the ugly and very expensive golf course). We know that we can eat out when we want to, find domestic help easily, find some of our favourite food products (but the imports will be very expensive) and there will be lots to do and visit to keep us busy for a while. So I think I can say that I'm looking forward to our coming move to Shanghai - see you there in a few weeks!
Publié par Beau Lotus 涟 à 18:25

I knew you would commented on your visit to Shangai. I don't need to say how jelous I am. Me, stuck in Modena for the rest of my life. I will be checking your blog and let my imagination fly. Please keep adding pictures and enjoy all the rest...C.&and Son.

CHINA!!!
You forgot the best reason. You will so much closer to Singapore...

I cannot wait to hear about your adventures.

Thanks, C. If you ever come to Shanghai you know that we'll be happy to host you and your family. As for blogging - I'm not sure since I won't be able to install a VPN until I move into my new house and one doesn't usually have access to blogger or to Facebook there.

@sraikh, sure I'll be nearer home but at the moment the air fares are too expensive, almost Europe to Asia prices so I have no plans to go home yet! Not worth it during the short school hols...

Lucky you! Don't have to be a slave to the kitchen anymore! Unlike you, I will probably be stuck in Stuttgart for the rest of my life too! .... Oh man, don't even want to think about it!

Lotus, bookmark this Cathay Pacific site, on behalf of your parents should you wish to fly them to Shanghai or Guangzhou. Occasionally, they will offer senior citizens package to passengers originating from Spore. For this year alone, I think I saw it like 3 times, the fares are very good value for money. The only hurdle is to transit in HK & then board another plane for Shanghai etc.
http://www.cathaypacific.com/cpa/en_SG/homepage
You yourself can also take advantage of Cathay's airfare to hop to HK or to Spore or around Asia as they offer twice yearly special economy fares within Asia itself. It is a very good deal compared to other Asian airlines.

Also, Facebook & Twitter can be accessed from China. You need to download some application to make it happen. There some expats in China with their own blogs mentioning this application.

Pris, Stuttgart is not that bad, it could be worse. At least you have a place to make your home, build more permanent friendships etc. Whereas we're like modern nomads...

Anon, thanks for the link. Will check it out, should be sending parents over when the weather gets better, will need to buy them air tickets indeed.

You need a VPN to access FB and Blogger, will deal with that when I finally move to my own place.