The last time I made a Seafood Lasagne we were still living in Paris. In fact we were in temporary dwellings having returned earlier than planned from Spain (2 weeks before I gave birth to Baby Girl) and not being able to recover our own flat from the tenants.

It was for Hub's birthday. I've thrown him a surprise birthday party, inviting his family and best friend SB. He came back from a business trip to find all these folks waiting for him at home. Cool, wasn't it?

One of the dishes I've prepared was this seafood lasagne. It's easy to make and can feed a decent number of people. My version has 2 different layers of seafood with 2 different sauces, and a garlicky cheesy béchamel.

I made this again nearly 10 years later for the lunch I threw the neighbours (8 of them) a few weeks ago. I guess I stopped making it firstly because the Babies do not eat fish and secondly as we've lived 4 years in Italy making it unnecessary to cook one's own lasagne.

It was well received by my guests and Hub had the leftovers to his delight - and asked why I've stopped making it all these years. I should make it more often, it's true.

The Teenager is away in Singapore for 3 weeks and the Babies are now on holiday. I've decided not to cook too much nowadays as we all need to lose some weight, though I've a few friends coming over for lunch tomorrow. I guess the diet will have to wait another few days.

The Prawn and Scallop Layer :

The Cod Fish and Salmon Layer :

Blanche the lasagne pasta sheets in boiling water, remove and set aside.

Grill the salmon and cod fish in a bit of olive oil. Season and cut into large cubes. Set aside.

Fry the garlic and chilli in some olive oil till fragrant. Add in fennel seeds, followed by the raw scallops. I usually salt the raw prawns for 10 minutes and then rinse them in order to have prawns that will not release too much water when they are being cooked. Add the prawns and sprinkle some thyme leaves over them. Toss in the tomatoes and season to taste. Set aside. 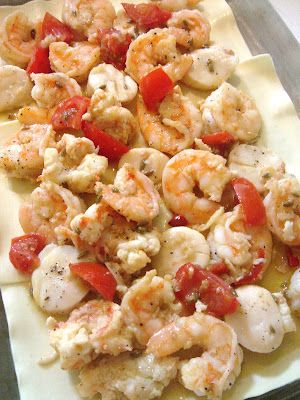 Prepare the red bell pepper sauce by cooking the largely sliced pepper in olive oil with the garlic in a small pot, covered and on low heat. When it is soft and fragrant, remove from the heat, add the cream and vinegar, season and mix into a rough sauce with a hand mixer. Set aside. 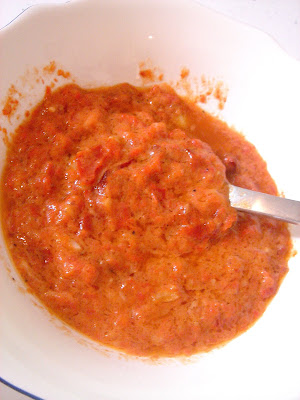 Fry the garlic in olive oil till fragrant, melt the butter in it and stir in the flour. Pour in the milk bit by bit taking care to stir all the time. The flour needs to be cooked or the sauce will taste horrible. Bring the sauce to the boil gently, stir in the wine, remove from the fire and stir in the parmesan cheese. Salt to taste. 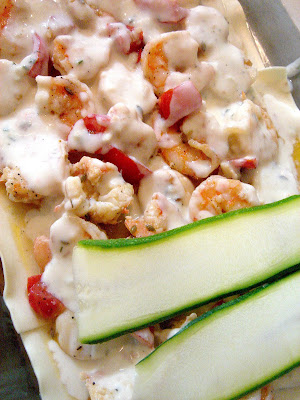 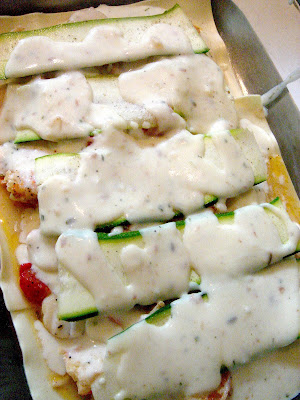 The next layer will contain the grilled cod fish and salmon, covered with the red bell pepper sauce. 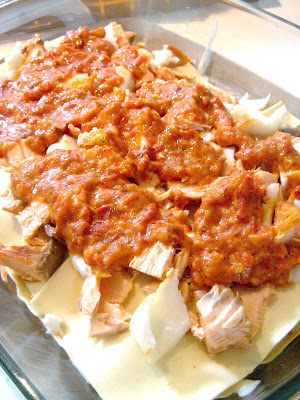 The final layer should be pasta, béchamel, parmesan cheese, sage leaves and a layer of cheese good for melting like emmenthal or mozzarella. 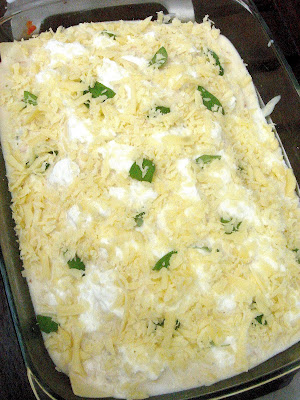 Ready for the oven

Wow. This dish is so tempting until I read all the steps. No wonder you don't do it when you were in Italy. I might try it one day though I would need a printable version. Thanks for the recipe.

Now that you're a SAHM you'll have the time to make it! Don't think too much of the ingredients, you can always make something you like and know already using the same principle.

BTW, where did you move to? Did you have the house built? How does it feel to move out of Paris?

Hi, I'm in some ulu village of 78. Nearest town with shops is Saint Arnoult en Yvelines which is 3 km away. ça va, pas trop loin. I guess Saint Arnoult should ring a bell. The péage de l'A10. When I mentioned that, everyone said 'oh, you moved that far.'. This house is 5 years old and the previous owner bought the land and had it built. My neighbour opposite built his own house. Husband and I will never venture into buying land and building house. It feels weird to move to a village. I used to live in Neuf Trois and felt blended in. Now, I got looks from the blancs here. And since it is only a week since I moved, I don't miss Paris yet.
I read about the pana cotta recipe. I love this dessert. Didn't know that it is that easy. I mean not too many ingredients. I think I will try that soon. What is whipping cream in French? :)
Keep writing. Now that the kids are asleep, and most boxes emptied, I do have time to surf.
Merci.

I'm hopeless with driving instructions in Paris since I've only ever taken the bus and the metro/RER when I was living in the city.

But Hub used to work ages ago at St Quentin en Yvelines and I knew it took him like 45 minutes or was it double that time to get to work from where we used to stay at the beginning.

When you have kids, it's better to live in a house, they can run around etc. And it's a good idea to stay home when they are still young. I did wonder about whether you would get looks from your white neighbours because it was like that at my MIL's countryside which is like an hour north of Paris near Compiègne.

Not much time to write nowadays truth be told. Have too much on my hands and it's not easy using the VPN to access the blog.