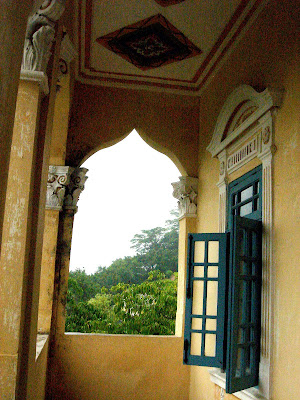 Li Yuan Xie Family Diaolou
It was raining cats and dogs when the cousins drove us to Kaiping an hour away from Jiangmen to visit the famous watchtowers or Diaolou 开平碉楼 in Kaiping county. They became a Unesco World Heritage Site in 2007 :
"...the Diaolou...display a complex and flamboyant fusion of Chinese and Western structural and decorative forms. They reflect the significant role of émigré Kaiping people in the development of several countries in South Asia, Australasia, and North America, during the late 19th and early 20th centuries, and the close links between overseas Kaiping and their ancestral homes. The property inscribed here consists of four groups of Diaolou, totaling some 1,800 tower houses in their village settings."
As a matter of fact we learnt quite a lot about Chinese immigration to America, Canada, Australia and S.E. Asia in the late 19th/early-20th centuries when we were in Jiangmen. The city governs the famous 4 (now 5) counties sei yup 四邑 : Kaiping, Enping, Xinhui and Taishan. Many of the former migrants have returned in recent decades to build universities, museums etc in the region which probably was the most important originating point of Chinese immigration to the rest of the world in that period. There was an interesting museum in Jiangmen on the subject that we also visited. 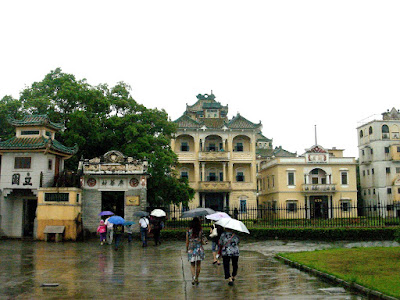 The cousins brought us to one of the more accessible Diaolou in Li Yuan. Entrance ticket was 90 rmb per person up from 60 rmb just last year. There used to be around 4000 of these fortified towers (watch towers, residential towers, communal towers confounded) in the 1920s and 30s, but there are only about 1800 of them standing today. Most of them can be found in Kaiping county. When you drive into Kaiping, you can see them dotting the landscape everywhere you go. 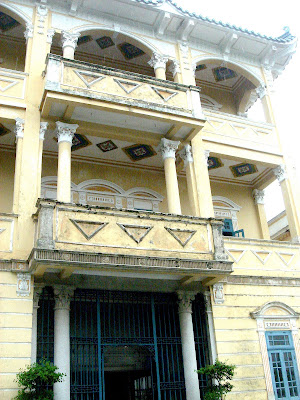 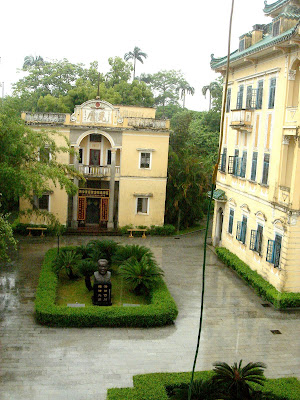 Diaolou were built by returning Chinese immigrants from the Americas and S.E. Asia. They usually contained both Chinese and Western decorative forms, many of them inspired from postcards of famous buildings in Italy, Portugal, France etc. They served as housing and as protection against bandits (and later the Japanese). In fact Kaiping county itself had been created from the need to break up a few counties in order to battle against the rampant banditism in those days. 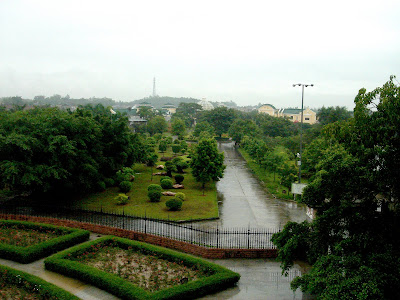 View from the main Diaolou 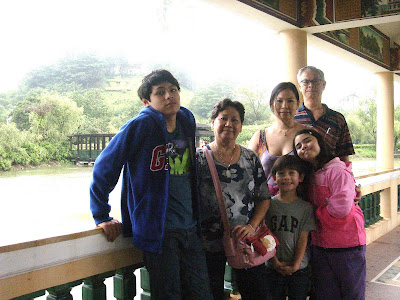 The family in Li Yuan
The more popular Diaolou are found in the Sanmenli, Zili, Majianlong and Jinjiangli villages. If you are in the region, they would be worth a visit and I would recommend that you hire a car and a driver instead of trying to make your way there by public transportation. 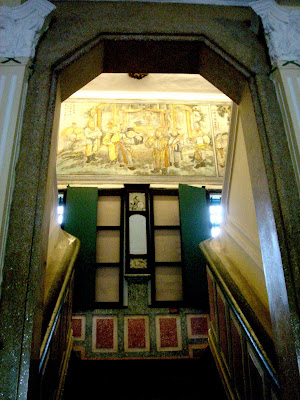 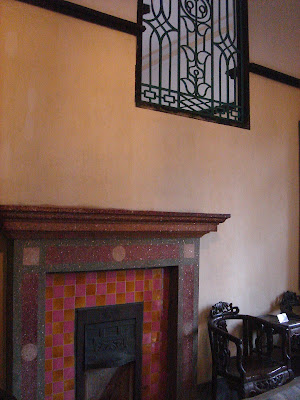 There were chimneys and high ceilings everywhere 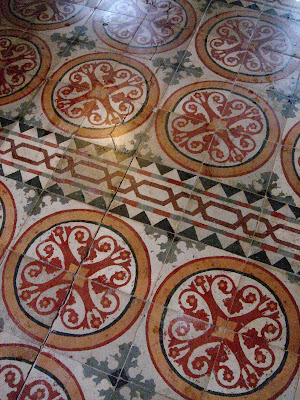 The floor in the main Diaolou
The Li Yuan Diaolou were built by the Xies who left Kaiping for America and made fortune in the herbal medicine business. The founder had 3 wives and tonnes of children and we also visited the Diaolou he built for his beloved 2nd wife who died during child labour. I thought it looked more like a prison than a residence, but compared to living in a shack that must be luxury. The whole family left China for good in the 1940s, and the property is now under the management (but not ownership) of the Chinese government. The main Diaolou was gorgeous though, I loved its interior.
Publié par Beau Lotus 涟 à 04:23

Now that you mentioned bandits, one of my ancestors in Hokkien speaking part of Fujian province was a notorious one!

Anyway, you are lucky that you do not need to give hong baos when you meet up with your China relatives. The Hokkiens have to do it if they return to their ancestral village. I think its obligatory.

BTW, did you visit your ancestral clan house, this is where your genealogy record can be found?

How did your kids see this trip? Do they value their Chinese ancestral roots which go a long way.

Of course have to give angpow but since my dad went with me I passed him the money and let him do the honour.

We only gave to kids below 16 otherwise there'll be no end to it and big ones to the really old.

We didn't go to the clan house as cousin said it would be too troublesome and costly - he was cryptic about it and we didn't push the subject either.

The family has its own family name book but I forgot to ask to see it.

Eldest son was quite interested in all that but younger kids couldn't be bothered.