Baby Boy is very fond of eating Pandan Chiffon Cake. I cannot recall where and when he picked up his first slice of the cake, but it's interesting that he should like it since he grew up in Europe and chiffon cake is not popular there.

A few months ago we attended a celebration organised by the Singapore Consulate in Shanghai and a vendor sold pandan chiffon cakes in the bazaar there. I was made to buy a small cake that was really expensive, and I asked myself then why I've been making orange and other chiffon cakes in the past but never a pandan one?

A few afternoons ago, I decided to whip up one quickly to match a charity theme. A few friends of mine here are organisers of the More Than Aware Fun Run yesterday (for breast cancer awareness) and green and pink were the colours for the charity. I made a Beef in Red Wine sauce for the pink and decided on a pandan chiffon for the green. Hub was away as usual (this time abandoning us to be with his best friend in Thailand) so we decided not to join the event, but I've wanted to be with them in spirit.

The chiffon turned out pretty well as I adapted the recipe for my other chiffon cakes for it, but I made the mistake of not being able to bear the loss of a tiny bit of pandan paste just after I've poured the batter into the mould, dipping the spoon into the batter...unfortunately this bit of paste sank into the bottom of the batter without mixing properly with it and the result could be seen after the cake has been baked. We learn from our mistakes, I'm sure. 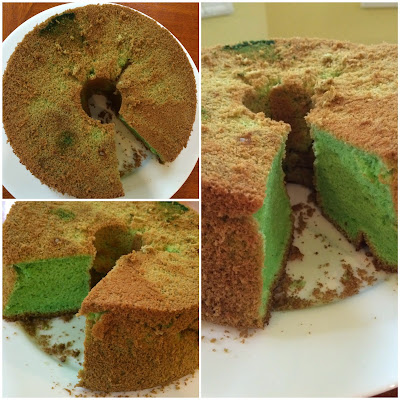 In a mixing bowl whisk the egg whites till half stiff. I prefer to prepare the egg whites first when the electric beater is clean so as to minimise failure.

Add the salt to the whites and continue whisking.

Add the cream of tartar and continue whisking.

Finally add the sugar and whisk till stiff but do not over do it.

In a separate mixing bowl, beat the egg yolks and sugar till creamy.

Add the oil and continue beating.

Sift the flour with the baking powder and mix into the batter.

Stir the pandan paste into the coconut milk and pour into the batter. Mix well.

Mix the egg white batter into the egg yolk batter in 3 times. 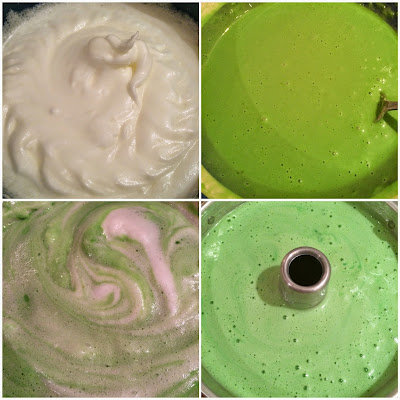 Pour into an ungreased and unfloured 21-cm chiffon cake tin and bake in the hot oven for 55-60 minutes.

Turn the cake tin upside down after you've removed it from the oven and let it cool for a while.

Use a knife with a serrated edge to separate the sides of the cake from the tin and unmould the cake onto a serving plate.

The cake can be kept (covered to prevent drying) at room temperature for 2-3 days, but probably not more than that as it contains coconut milk. Keep part of it in the fridge if need be.
Publié par Beau Lotus 涟 à 12:29

Hello Everybody,
My name is Mrs Sharon Sim. I live in singapore and i am a happy woman today? and i told my self that any lender that rescue my family from our poor situation, i will refer any person that is looking for loan to him, he gave me happiness to me and my family, i was in need of a loan of S$250,000.00 to start my life all over as i am a single mother with 3 kids I met this honest and GOD fearing man loan lender that help me with a loan of S$250,000.00 SG. Dollar, he is a GOD fearing man, if you are in need of loan and you will pay back the loan please contact him tell him that is Mrs Sharon, that refer you to him. contact Dr Purva Pius,via email:(urgentloan22@gmail.com)Thank you.