Baby Girl had a very slim lady teacher who was gluten intolerant and I guess I wondered then if that was why she was so slim and elegant. That was the second time I was actually brought to think about this problem, the first being that one Christmas party I attended at Tetra Pak in Modena many years ago where they had a separate buffet spread for employees with coeliac disease. The third occasion was last year when I organised a lunch for my BISS Year 12 class and discovered that one of the very slim and glamorous mums who attended was gluten-intolerant.

From the look of all the round and boisterous members of my family, none of us seems to be suffering from this misfortune and could eat as much pasta, bread and cakes as we want, which we did, making us look like what we ate basically.

Then I noticed that gluten-free products whether primary (e.g. flours) or finished tend to be much more expensive than normal ones and that made me curious to find out more about the disease. I even bought a gluten-free cookbook written by some celebrity chef, but must admit that most of the supposedly delicious recipes hadn't inspired me thus far.

Finally, a Germany bakery here was having a promotion a few weeks back and never one to be able to resist a sale, I bought a packet of premium hazelnut meal and have since been wondering what I could do with it.

A few days ago, I decided to make a simple Gluten-free Chocolate Hazelnut Cake for 3 reasons: 1. to use up the hazelnut meal; 2. to give the kids a taste of a gluten-free cake; 3. because I suspected that Hub would enjoy it very much.

The cake turned out very well and I served it with home-made whipped cream. The kids thought it tasted nice, but preferred the "normal" chocolate cakes that I've baked them. Hub, as predicted, loved the taste and texture of the hazelnut meal in the cake and basically ate most of it up on his own!

The next time there should be a need for a gluten-free offering, I would know what to bring. 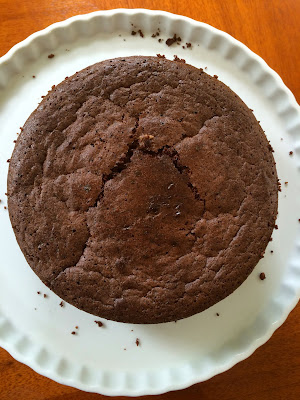 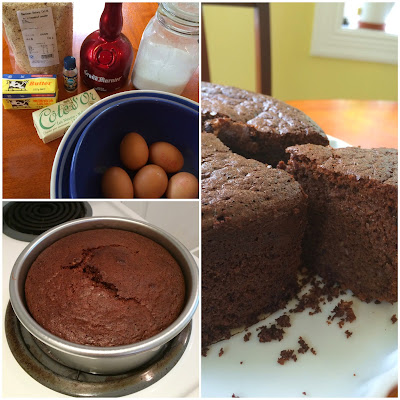 Using a clean and dry electric beater beat the egg whites till stiff, adding the salt and then the sugar along the way. Set aside.

In a separate bowl melt the butter and chocolate in the microwave. Mix well and set aside to cool.

In a large mixing bowl cream the eggs and sugar together. Add the vanilla and alcohol.

Stir in the butter-chocolate mixture.

Stir in the hazelnut meal.

With a spatula mix in the egg whites in 2-3 portions.

Pour into the prepared cake tin and bake for 45 to 55 minutes. The wooden skewer you poke into the cake should come out clean.

Leave the cake in the tin to cool for a few minutes before turning it out. 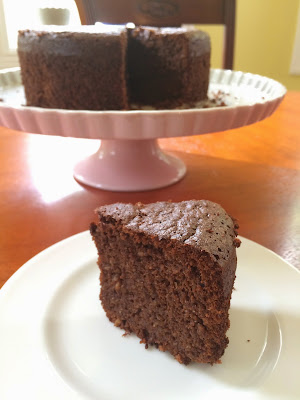 Eat it as it is, with some icing sugar over it, or with home-made whipped cream like we did. The cake was not as compact as it would have been otherwise because of the use of egg whites. It even managed to turn out quite tall even though there was no baking powder in it.