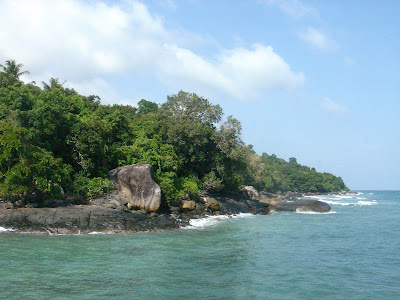 To tell the truth I've never thought it really value for money most resort-style holidays in Malaysia. Nature is kind to the country but probably not as kind as she is to Thailand or Indonesia, and you usually get more for your cash in the latter 2. 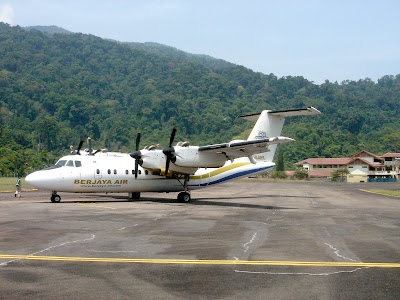 Having said that, an island like Tioman (32km off Pahang in Peninsular Malaysia) is one of the prettiest (think Bali Hai) and nearest to Singapore and with Hub working his arse off nowadays it wasn't really an option to spend hours travelling to some paradise destination. Berjaya Air operates a short daily flight (tiny propeller plane, a little wobbly) to Tioman from Singapore's budget airport terminal and once there you are not far from most of the hotels/chalets in the Nature Reserve. We chose to stay in the Minang Cove Resort after reading good reviews about it in Trip Advisor. It's a good 30 minutes away from the airport by boat (southern tip) and the transfer was smooth if a bit costly - 100 RM per adult whether you were solo or 10 to travel. Sea was a little choppy when we were there so do consider taking a tablet if you are prone to seasickness like I am. 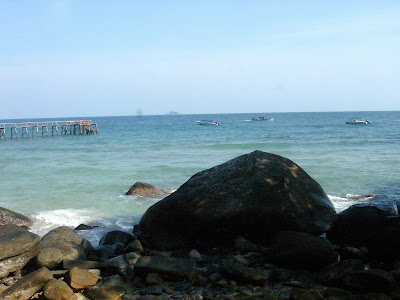 View greeting us when we arrived was lovely. A beachfront resort and a range of mountains just behind. We didn't know then that just weeks before a female French tourist was murdered and buried in some cave on the island, but I digress. 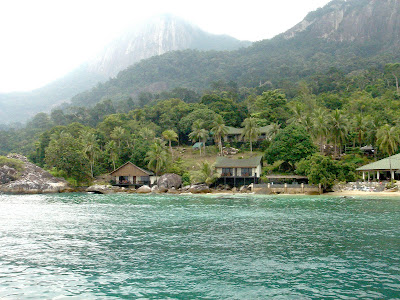 Our beachfront villa was on the extreme left

The sea was beautiful and the water rather clear, but the beach at the resort was tiny and littered with stuff (e.g. dead coral) that could hurt the feet. Small crabs inhabit the rocks in the surroundings and Baby Boy had the misfortune of stepping on one accidentally and being pinched on the big toe by said crab. Luckily it was tiny. 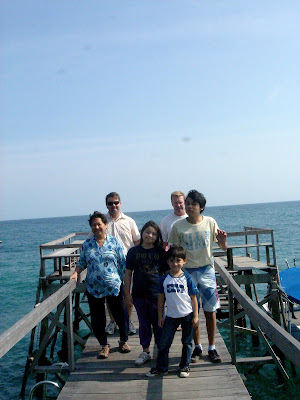 We were offered a cocktail by the English owner (he runs it with his Malaysian wife and stepdaughter) and then shown to our 3-bedroom beachfront villa. It was clean, air-conditioned and had a beautiful view of the sea. But the sound of the waves was quite loud and you either sleep very well as a result - or not. 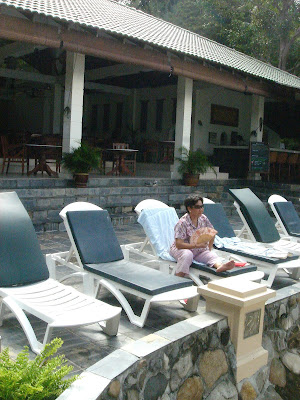 There wasn't much to do at Minang Cove unless you snorkel (lots of fish and coral reefs) or scuba dive or enjoy walking for hours without end in the forest (dense, sparsely-populated, contains a number of protected species of mammals, also the soft-shelled turtle; we saw the black giant squirrel!). Mum doesn't do any of the above and spent her time checking out the resort staff, the other clients and watching everyone going about their business. You could pay extra to go on boat trips or return to the airport and play golf at the Berjaya Resort. Or read, read and read like I did. I borrowed a few books from our wonderful NLS (National Library Singapore) and the resort also had a small free library. 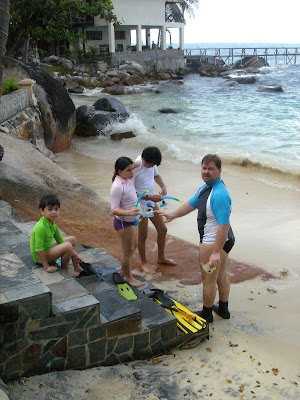 Hub and kids getting ready to snorkel 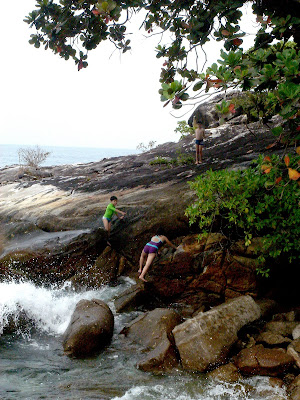 The kids spent their time playing on the beach, climbing rocks or snorkelling in the sea. Hub dived a few mornings. The highlight of the evening was usually fish feeding (mainly involved dumping the day's rubbish into the sea) as you get to see sharks. We walked to the nearest village (about 45 minutes one way, walk another 45 minutes and you'll get to a waterfall) which was quite dead since most of the able males have gone to the mainland leaving only the old and the young behind. Bought cold drinks from the 2nd wife of some village elder who told me that it hadn't rained for a long time on the island. My Malay is rusty after not having spoken it for 30 years, but I usually get by if you give me some time to sort through my mental language library. I usually get mixed up with the last language I've learnt (in this case Italian). You can see that the refuse pipes from the WCs in the kampung's houses lead to the beach. Personally I wouldn't swim in the water in the village. 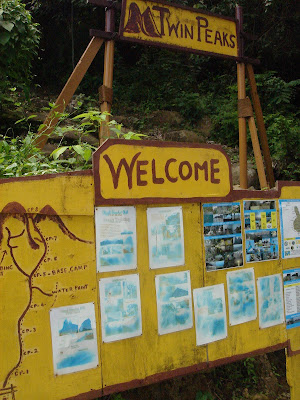 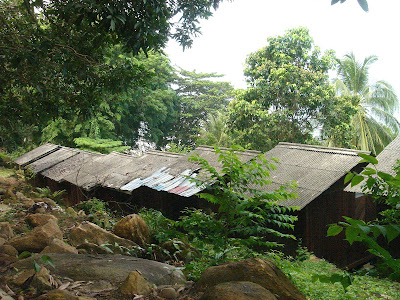 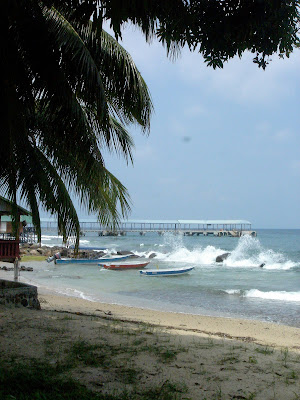 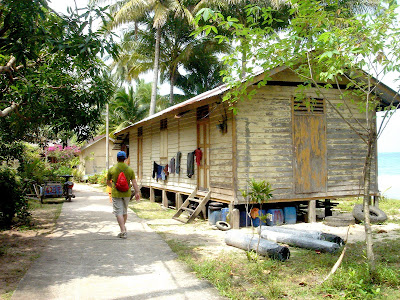 Of course it rained that night. And rained for the next few days. Very unusual for the season, we were told. But not that unusual if you consider our record. Rain follows us wherever we go.

Breakfast, afternoon tea and dinner were included in the price. All pretty decent affairs unless you do not like eggs or bananas. There was only one item for afternoon tea and it usually had to do with bananas - a problem if you hate bananas like Baby Boy (ironic since he was born in the year of the monkey). But I love bananas especially if they were fried whole (goreng pisang) or mashed and then fried (jemput jemput pisang). So I stuffed myself while my already thin boy starved.

Dinner could be a BBQ (e.g. satay - quite tasty) or small buffet (e.g. nasi lemak, beef rendang...). Food was good if they stuck to cooking Malaysian, but once they tried their hand at Chinese or Thai the results were often so-so. My complaint would be about lunch - starting from 28RM for a plate of oily nasi goreng! Seriously it was a rip off and even a luxury hotel on the mainland wouldn't charge that much for a plate of fried rice. But there weren't other options around, not sure I would eat in the sleepy village anyway. Ditto for drinks, prices were European, though free water was supplied all day long at the bar.

If you are looking for a quiet getaway near Singapore this is the place. They even have a tiny spa manned by 2 Thai girls and though the massages were pricey they were good. I particularly loved the tree-top sensation.

5 days were more than enough for us at Minang Cove Resort. Couldn't wait to get back to my prawn noodle soups.