Today is Children's Day in Singapore. Or I'm being stubborn because I now live in China and we have just started the famous Golden Week (if you see lots of Chinese tourists where you are you'll understand why) celebrating the PRC's National Day. The security guard just delivered us a bag courtesy of the Shanghai Municipality to mark the occasion and it contained a TCM brochure and a free wooden health comb.

I have therefore decided to do another long due post on Shanghai. We have been living here more than 2.5 years now. Officially the contract finishes in March next year, but with Hub helping the company open up factories in the North plus his having just taken over their Malaysian operations, I suspect that we would be here for a little while longer.

We live reasonably isolated from the humdrum of Chinese life. When we leave our lightly gated community we do find ourselves in the midst of the locals and migrant workers, but Jinqiao in Pudong is still a small (expat) world apart from Puxi - the historic part of Shanghai.

Visiting Puxi was therefore often looked upon as a little expedition for some of us, especially when the traffic jams on the way there seemed to be getting from bad to worse nowadays. Not surprising when you consider the thousand COEs they issue each month to new car buyers and these new cars tend to be those big, expensive imported ones that take up a lot of space on the roads. Foreign car makers used to imagine that cheap, outdated car models would sell like hotcakes in China, only to discover that only the Chinese carmakers could make lousy cheap cars that the Chinese would buy; the majority only want the very best that even many Europeans and Americans could no longer afford. This is an example of the Chinese success story and my Jiangmen cousin's recent purchase of a BMW is a case in point. Rewind to the 1980s when he sent us a photo of his proud purchase : a 3-wheel mini-van/scooter. He has done well like so many of his comrades.

Together with my neighbours J and F we finally found a moment last autumn for our walkaround. We asked to be driven to the former French Concession (forgetting the word "former" could get one into trouble with the authorities) and from there explored the surrounding (older) neighbourhoods on foot. They probably had fantastic photos as they brought along their SLRs, but I was too lazy and used my really old Sony. Many things have changed since, e.g. one building we saw being renovated then now houses a French restaurant.


We walked through Fuxing park (the one where Chinese and dogs were not allowed entry in the old colonial days) and saw the Chinese dancing in it; we walked past street markets and tasted some of the less dangerous-looking wares. We peeped into boutiques, but could find nothing to buy either because we couldn't fit into Chinese sizes or couldn't afford Shanghainese prices. Contrary to popular belief outside China, Shanghai is a very expensive city.


Near Yongkang Lu I walked past a tiny shop selling cloth and the owners giggled when they saw me. When they realised I could speak Chinese they told me I looked like some famous ethnic minority singer in the country. I think I knew who they were referring to; funny enough the singer in question is also married to a European.

Over the summer I've read a few books written by Shanghainese who have fled China in the 1940s and who lived in the Western world after that. It was fascinating learning about the  street names in French in those days (e.g. Huaihai Zhong Lu used to be known as Avenue Joffre), about the prosperity in the city before the Communists took over. As you walked around the city you could imagine (often still see) its former splendour, and sometimes one wonders what things would have been if there hadn't been communism, the cultural revolution etc. Probably fewer ugly towers (like in HK) that have aged badly, to start with. 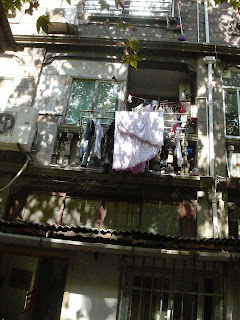 However, delayed prosperity is better than no prosperity. I just found out, for instance, that one of my drivers (since August this year we have 2 cars and 2 drivers) is going to become quite rich overnight. His late grandfather owned a broken-down-no-private-toilet old house near People's Square in Puxi that is finally going to be acquired by a developer. The compensation depends on the number of people registered under each address and in Driver J's case, the three (feuding-because-of-incoming-wealth) families "living" under the roof will each receive two new 2-bedroom apartments (choice of 3 locations in Shanghai). At current property prices (e.g. in the Sheshan area where the new flats will be), their old house is worth around 800,000 euros!

Driver J is now going to be very comfortable like a number of Shanghainese with wealth that just dropped on their laps thanks to the crazy development of their city. He whined that the locals who used to/still own land (本地人) in the near countryside are/will be even richer because the compensation tends to be 2-3 times more important than for small old houses in the city. I've heard stories of road sweepers turning up for work driving Mercedes-Benz because they had become rich overnight but had no skills in life besides farming, for instance.


His daughter's generation will be the most fortunate, I think. The girl will have at least 4 flats to inherit later on in life: her maternal grandparents' flat in Qibao, her dad's current Kangqiao flat and the coming 2 flats in Sheshan! In fact, you just need to rub shoulders with young Shanghainese to know that they will be one smirky-very-pleased-with-themselves generation to look out for. They have comfortable lives, good education, good jobs, good future - and cannot imagine why they couldn't always get what they want in life.

The other day I lunched alone at the Food Opera food court at Super Brand Mall. Left an old folded shopping bag on a seat so that I could free my hands to carry my tray of food. Came back to find a young Chinese girl on my seat. When I told her that she was sitting on my seat, she looked at the bag she had removed/set aside and retorted, "I couldn't possibly not sit where I wanted to because of your bag, could I?"

I freaked out when I heard that because I had expected to hear a brief apology and was getting ready to move on. Obviously she didn't think it wrong to touch something that didn't belong to her, nor did it occur to her to apologise for having done that. A whole city filled with complacent, spoilt brats like that, what future does this country have? 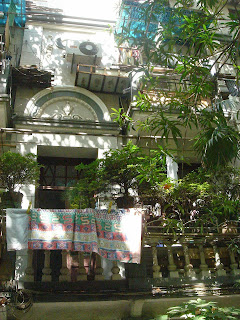 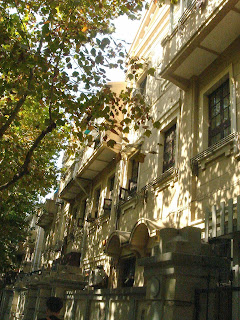 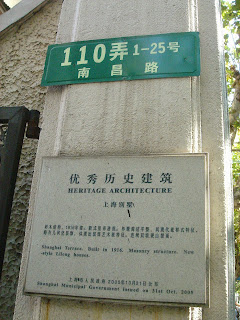 Anyway, while waiting to see this city transform itself into one of unparalleled wealth, of glittering skyscrapers, megastores and ubiquitous Land Rovers, we are going to try to enjoy as much of what still remains that is charming and interesting.

I must remember to ask Driver J to check with his neighbours before they move if they have any old furniture they would be throwing out that could be of interest to a karang guni like myself.

Hello, I am heading to Hong Kong in a couple of weeks and I can't decide on a hotel. I noticed you stayed at OZO Wesley. Would you recommend it? It's highly rated and well priced, but I'm concerned about its proximity to the "Red Light" district. My other two choices are in the Sheung Wan area, also budget hotels.

You meant the notorious bars in Wanchai? The neighbourhood is pretty big. Ozo is nearer to the Pacific Plaza and Star Preccint areas.

I found it! Sorry, I can't read French, but figured out how to page forward to your older posts. Would you still recommend the OZO Wesley hotel? It looks very clean and inviting and in a great location for taking public transport. Or should I look West? Thanks again for your input! Love your photos!