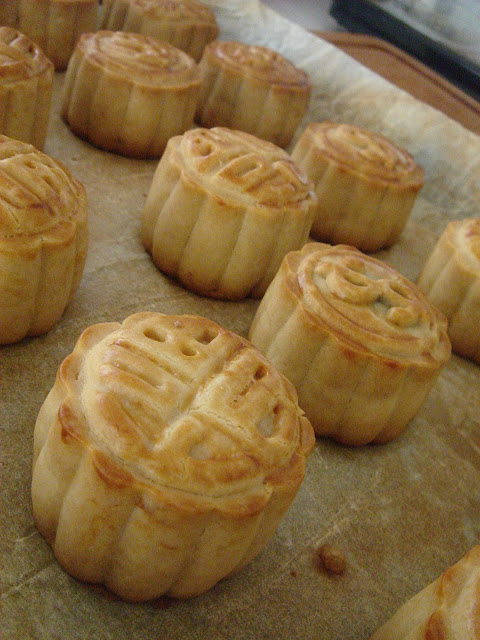 I haven't been able to bake my own mooncakes last year like I'd promised myself I would the year before. Apart from being lazy I'm also trying to lose some weight (since when have I not been trying to lose weight you'd say) so it would be crazy to start baking dozens of the sweet and oily stuff much as it would be nice to have a few nice pictures to show for the effort.

Then came the neighbours to the rescue. In anticipation of the Mid-Autumn festival J attended 2 mooncake-making classes and kindly agreed to share her new-found skills with a few of us. She brought over all the necessary ingredients and all I needed to provide was my table top, coup de main and hot oven. Charming company thrown in, of course. 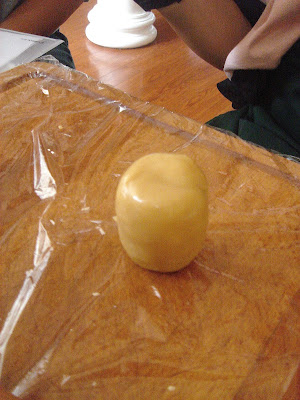 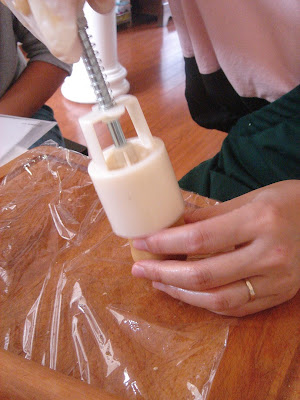 You should see the amount of golden syrup, oil and sugar that went into those mooncakes. I had to provide a lot of cling wrap if I didn't want the table top to be over moisturised. Though it was fun making them because you could more or less fill them with whatever you like. But I'm a simple girl, I either like red bean paste or lotus seed paste with double egg yolks. 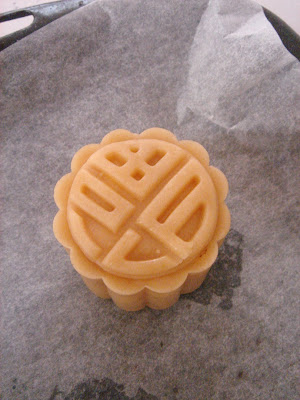 Incidentally I ended up eating quite a number of lotus seed and red bean paste mooncakes last year in spite of my good intentions (not to). The Chinese cousin sent up 2 boxes from the South (containing dried tangerine peel though you couldn't really taste it - thank God) and a local friend offered me a box (that also came from the South).

I also ate a number of the local savoury pork mooncakes that were really good when eaten hot off the oven. Though ask me not what they filled those stuff with, one couldn't really make out what was meat and what was fat but eat everything together and I can tell you it was good (though not for the heart).

So I start off 2013 with the resolution (once again) to make my own mooncakes this year. I will buy a few of those modern plastic moulds (see picture) that may not be sexy or ecological, but oh so easy to use. Another good reason to spend more time on Taobao.
Publié par Beau Lotus 涟 à 09:54

Hey, glad that you are back at blogging. Very sweet of your family to present a book of your posts for your birthday. I have a favour to ask you. A friend lent me 小熊维尼与跳跳虎 DVD and my boys love it a lot. I had returned the DVD to my friend but can't buy it anywhere except in China. You are the only person I know living in China with a French bank account (I assume). :) I know it would be a trouble for you so let me know if you are willing to help me out to get these DVDs. No obligation of course. Merci d'avance.

On behalf of the National Library Board (NLB), we would like to invite you to pledge your blog to the Singapore Memory Project as part of efforts to collect memories that are already manifested in existing online channels.

The Singapore Memory Project (SMP) is a national initiative to collect, preserve and provide access to Singapore’s knowledge materials. Spearheaded by NLB, the SMP aims to build a national collection of content in diverse formats (including print, audio and video), to preserve them in digital form, and make them available for discovery and research.

By pledging your blog to SMP, you are affirming that every memory matters. Whether your posts are an account of your daily life, or an expression of your thoughts, the SMP hopes to find a home for your memories so that it can help build towards an understanding of Singapore. You will also receive a badge that you can display on your blog in recognition of your contributions.

Contributors to this blog pledging initiative will be listed on Singapore Memory portal’s blog pledging webpage. All blogs pledged to SMP will archived using NLB’s web harvesting software, in addition to images of each blog’s landing page.

If you are keen to pledge your blog to SMP, simply fill up our response form at this following URL: http://singaporememory.simulation.com.sg/Public/Pledge.

You may find out more about this initiative at http://www.iremember.sg/?page_id=2822.

We are looking forward to your contribution.

Hi could you email me via Deb White? If I find those DVDs they would be pirated mailing directly to you wouldn't be an option need to figure this out autrement.