Shanghai on the Move 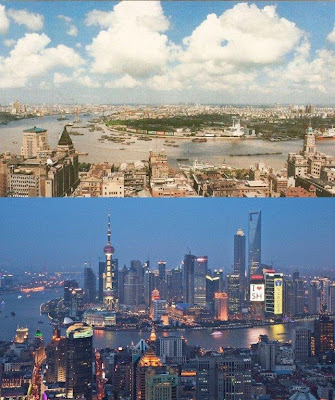 View from the Bund : early 1990s vs today
Shanghai, as you can imagine, is a city constantly on the move. Skyscrapers are now where only farmland used to exist, a street lined with food stalls now contains malls full of restaurants and each time my driver loses his way he would blame it on the fact that "once again the roads have changed". He grew up in Puxi and used to drive a cab in the city, but often looks upset when I tell him to drive us to the old town. I don't blame him, the jams tend to be quite bad the minute you leave Pudong.
Prices too are changing all time, moving upwards at quite a frightening speed. At my junk furniture store, the same wooden stool I paid 150 rmb for in May 2011 now goes for 250. The person who introduced me to the shop paid 100 rmb in 2010. Every bowl of noodle I had this year turned up smaller than last year's in the same shops. I turned up at shops and restaurants now and then only to find that they have closed down. I promised myself not to stock up on anything anymore when we left Italy but I'm starting to have second thoughts now.
I personally do not know where they are going with this though one thing for sure it looks like Shanghai is set to look like another big city like so many others elsewhere in the world. With no real skills or productivity to match, but already becoming more expensive. Filled with spoilt and rude individuals who came out of one-child families. Or young girls on the lookout for the easy way out.
Recently I keep having these thoughts : physically they look Chinese and they occupy Chinese land, but culturally they have lost it a long time ago. Most of the people I've met know even less of Chinese culture than I do and their only religion seems to be money. Even Buddhist temples charge entry fees (and they are not cheap), seriously what happened to being a "place of worship"?
Many people (not just politicians or businessmen, also doctors, policemen, teachers etc) are as corrupt as the feudal lords from their glorious past and anything can trigger a mob reaction in these parts simply because they form such a mass. The thought of having to bribe kindergarten teachers so that they would keep an eye on your child (e.g. not let him stew in his soiled diapers), doctors so that they would give you a bed, surgeons so that they would stitch you up properly, policemen so that they wouldn't give you trouble etc staggers. One foreign guy messed up a local girl in Beijing and now they are cracking down on foreigners in the major cities, you wonder sometimes how safe you are and how well-protected your rights.
Yet Shanghai is the place to be in now. There is much going on, you still get to see the changes and enjoy them, and it's not getting better elsewhere anyway. Hub was saying that we should retire to Singapore in the future. I find that quite disturbing because if you look at how things are back home now, soon there will only be Mainland Chinese people or imported Indian technicians on the island and Singapore is so tiny I do not see how we're going to be able to live with them in such numbers. When I left Singapore in 1995 the population was 2.6 million. Now it's 5.2 million, how can a country's population double in such a short time? I'd rather be a foreigner in a foreign country than be a foreigner in my own. 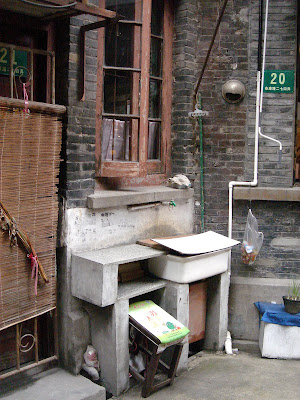 June 2011
I started out only wanting to show you this before and after photo. I have no idea how that got me off to blabbing about the above. I brought PL and J to Tianzifang a few weeks ago when they visited Shanghai. And discovered that one of the dark dankly places that used to be lived in has since turned into a(nother) clean and new shop! 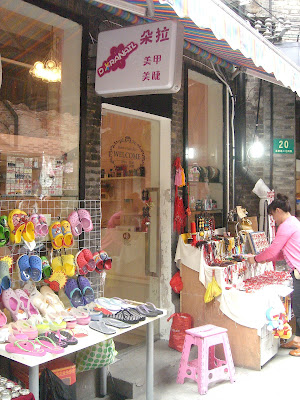 May 2012
I guess from the outside these houses look quaint and interesting, but the people who live in them must not find them very comfortable. They are not going to continue living in them so that we tourists could take nice exotic photos to blog about or paste on Facebook, and like I'm doing now, wax about how sad it is that all the old places are being destroyed to make way for cold identical modern pads. But I said it anyway.
Publié par Beau Lotus 涟 à 08:43

Great post! really enjoy the before and after photos as well as a real insight of the Dragon city and it's people.

Lotus, you alright? Seems like Shanghai teeming mess of humanity is getting to you. Good to exit out of China for a while & head to maybe nearby Japan or HK to chill & relax.

BTW, are you making your way to HK yet since there are a couple of low cost flights from Shanghai. The dim sum is fab as always and the luxury outlets shops in HK are genuine.

The trouble with Spore is that we get the not too good immigrants while the good ones are headed to USA, Canada, Europe & Australia. To put it bluntly left with the scraps.

Contrary to popular belief, lots of highly talented Chinese do stay within China or return home. They have the skills set its just that they within a large country, they are kind of spread out in the major cities.

@Nonya, thanks for visiting, you have a beautiful blog, and seem to be an expert baker! Cela fait 7 ans qu'on a quitté la France, mais on y retourne tous les ans.

@Anon, do not get me wrong, I love being in Shanghai. And I do not worry for me, I worry for the Chinese in the long run and the repercussions that could spill over to outside and nearby China. Things are moving so fast here they just seem surreal at times, I've lived thru Singapore's initial rapid development but somehow it doesn't look like it may cover everyone here and I wonder about its social consequences.

Meanwhile I am looking forward to joining my BFF for a weekend in HK, we would be celebrating our 40th birthdays there!

Lotus, well OK. Happy 40th birthday in advance! Have a great time in HK, truly Pearl of the Orient.